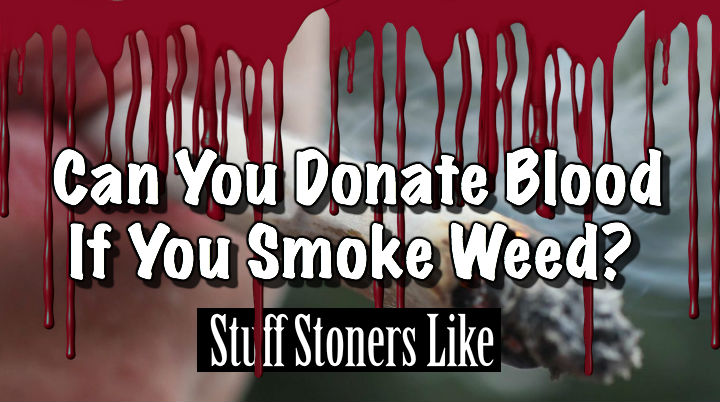 Can you donate blood if you smoke weed?

Can you donate blood if you smoke cigarettes?

I suppose that all depends on what you’re smoking. Actually no, no it doesn’t. Hypothetically, you could smoke all the crack your little heart wanted, as long as you weren’t high as fuck when you went in to give blood. So what’s the one thing that will prevent you from donating blood? It seems out of all the possible reasons for your particular blood being rejected, or not even taken in the first place, smoking weed isn’t anywhere near any of them.

If you smoke weed can you donate blood?

can you donate blood if you smoke weed? Well some people think that perhaps, because they smoke copious amounts of cannabis, maybe that somehow disqualifies them from being able to donate blood because of the issue of weed in blood. Let’s get a few things straight. First of all, there’s no such thing as having weed in blood. If you had weed, or marijuana in your blood, you wouldn’t live very long. It’s really no fault of the weed itself, just a matter of how the circulatory system works. You could get any sort of foreign object somehow jammed up in there and it wouldn’t take long at all for death to creep in. Again though, in order for that to happen some other sort of catastrophe would have had to take place first, which would probably leave you in the position of needing the blood, rather than donating it.

Although if you have ever used IV drugs before, you won’t ever have the pleasure of donating blood. The Red Cross is firm on this stating, “Those who have ever used IV drugs that were not prescribed by a physician are not eligible to donate. This requirement is related to concerns about hepatitis and HIV.” So you know, IV drug use that was prescribed by a physician is all good.

Can you donate blood after smoking weed?

Back to cannabis though, and in all seriousness, as long as you show up to the donation station with a smile on your face and skip in your step you won’t have any problems. It’s when you show up trying to push boundaries or buttons and act all high because maybe you think you’re proving some sort of point that cannabis isn’t harmful. But let’s be real. As real as this simulation allows us to be. As much fun as that sort of behavior is, or used to be, it simply doesn’t help further the cause in any way, shape, or form. So just remember that if you want to give blood, go give that shit. If you smoke weed, that’s fucking bad ass. Just don’t put it in everyone’s face when you are trying to do a good deed. We’re all just shitty humans trying to be a little less shitty.

The theory goes that as long as you wait long enough for the Red Cross people to not know that you were just smoking a bunch of weed, or taking a ton of dabs, you should be fine. If someone says something, they will think that because you appear to be high, you still have psychoactive cannabinoids in your system, and that could somehow taint the blood. Marijuana in blood right? That’s so scary. Whether or not that’s true, I’m not a Hematologist by any stretch of the imagination. I’m sort of the opposite. I don’t do well with blood, unless it’s of the cartoon animated Battlefield 1 variety. Of course the blood is tested for contaminants and such, but as with anything humans do, nothing is ever perfect all the time.

Do they drug test you before donating plasma?

The short answer is no. They do however, test the blood to make sure there isn’t any contamination issues with it. For purity and taste. I kid of course. Although if you are wondering what do they test for when you donate blood, then you’re in luck. There’s a whole comprehensive list here on the Red Cross site. I’ll give you a quick summary here:

When you donate plasma or blood, they run screening tests for several infectious agents, including hepatitis B surface antigen, hepatitis C antibodies, HIV-1 and HIV-2 antibodies, and of course, a serological syphilis among others. They also do Red cell typing, but for more information, I’ll again direct you to their site here.

Can I donate plasma if I smoke weed?

So what’s the official statement on donating blood and smoking weed? Can I give blood if I smoke weed? The Red Cross, on a Q & A pamphlet you can read here, says, “While the Red Cross does not encourage the use of controlled substances, marijuana or alcohol use does not necessarily disqualify you from giving blood as long as you are feeling well. If you have EVER injected any illegal drugs, you can never give blood.”

There have also been some other questions people sent in regarding cannabis and the active metabolites in the blood stream. One that we get quite a bit is, “How long is THC in blood?” THC doesn’t necessarily stay in the blood that long, but what your liver metabolizes it into, 11-OH-THC, better known as 11-hydroxy-thc, can be detected in the blood for as long as a few months, depending on the individual, the metabolization rate, and the quality of the test being administered.

What have we learned today? Can you donate plasma if you smoke? Yes you can. Just use common sense and be a good human about it. How long can marijuana be detected in blood? A good long while, and it’s not marijuana they are detecting, but the active metabolites. How long after smoking weed can I donate blood? Just don’t smoke on your way to the clinic, and try not to be saturated in the smell of weed when you roll in there, and everything should be just fine. Giving blood and smoking weed are, and will continue to be, stuff stoners like.