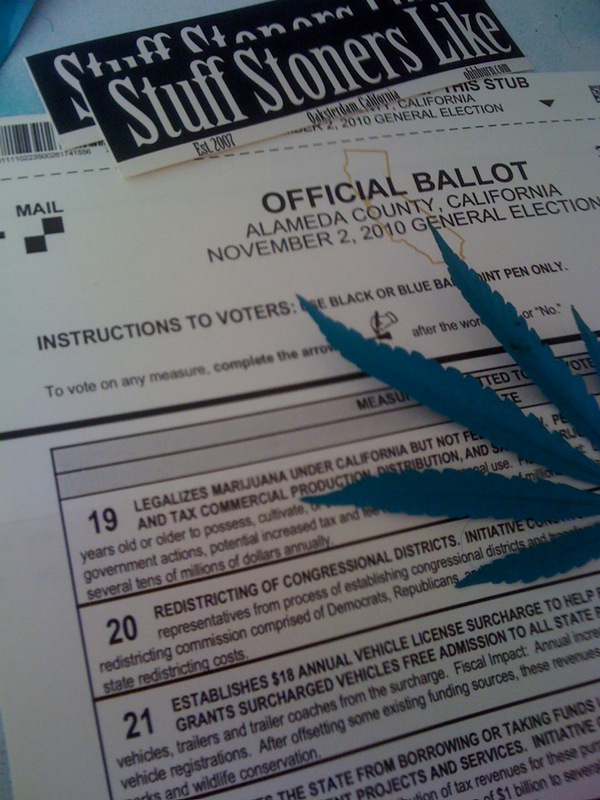 Why not leave us a passionate comment and let us know EXACTLY how you feel about PROPOSITION 19? Should the state of California Legalize, Tax and Regulate Marijuana? This isn’t a vote to take lightly, man. Tell us how you feel.

AS BORN AND BRED STONERS IN OAKLAND…We’ve been in the THICK OF this SHIT since the BEGINNING! Many times we’ve spoken to Richard Lee, founder of Oaklsterdam University and owner of Coffee Shop Blue Sky, who funded this proposition. We’ve heard from DRAGONFLY De La Luz (from Cannabis Culture Mag, West Coast Cannabis, etc)…an outspoken and celebrated marijuana activist who has some points against the proposition. And, we’ve got comments all over this blog from several STONERS who are all for Prop 19 and many who are against it . But, have we heard from YOU? This historic vote will impact our nation and everyone in it…with repercussions worldwide! Even if you don’t live in the STATE of WEED CALIFORNIA…now is your chance to be heard, worldwide on STUFF STONERS LIKE…and why not…it seems like the world wants to know what us STONERS think, right? Let’s make it easy for ’em. Tell US TELL the WORLD how you feel…about the LEGALIZATION OF MARIJUANA!

Don’t miss out. NOW IS THE TIME to stand up and be heard…and since STUFF STONERS LIKE are located in the cultural hub known as OAKSTERDAM in OAKLAND, CALIFORNIA…the birthplace of Proposition 19 and the very epicenter of the modern LEGALIZATION MOVEMENT…THE ENTIRE FUCKING WORD IS WATCHING US!

LEAVE US A COMMENT WITH HOW YOU FEEL NOW!

Oh and yes…yes, we did spray-paint that pot leaf blue. Why? We’ll because we used it as a stencil…on an envelope…that was filled with FREE STUFF STONERS LIKE STICKERS. Want one?

16 Responses to “SHOULD CALIFORNIA LEGALIZE MARIJUANA?”