Like there’s a ton of green to be made and clipped in the marijuana industry. And, the best thing about it is that it’s all completely tax-free! And tax free money, shit anything free really, falls in the same category as Black Sabbath, Oreos and bong hits…as Stuff Stoners Like!

Yep, in this weak-ass economy there are plenty of people willing to accept the prestigious gig as pot clipper or trimmer. And, why not…because who the hell wouldn’t want to get paid to prep weed? You’ve got to be an idiot or a Coldplay fan to turn down a gig like that. And, boys and girls we hear you get to smoke as much herb as you want while you work just like the job you had in high school. The seasonal demand for clippers starts in just a few short months…when all that precious weed is ready for harvesting, so buy some oregano or find a few old Barbies who need a haircut and start practicing. 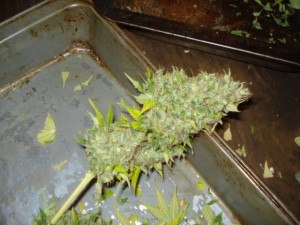 Get paid hourly or just rake in a fat lump sum, the choice is up to you since the government ain’t involved. Oh and don’t worry about passing a drug test. Actually maybe you should worry, because if you DON’T fail the test…that means you’re pro’lly a narc and that’ll lead to an ass-kicking!

Oh and get this…meals are often provided, if you like the Grateful Dead or Phish you won’t blow your brains out after a full-day of listening, you might be able to finagle a free place to stay for a night or two and clippers are usually allowed to pocket some of the product for personal use, plus the stuff they actually stuffed in their pockets when growers weren’t looking!

Staff Sgt. Dave Goddard up in CA’s Mendocino area said operations with between 500 and 1,000 plants generally hire extra help to clip and monitor the plants. Larger-scale operators often have up to seven different grow operations and employ larger staffs, he said. 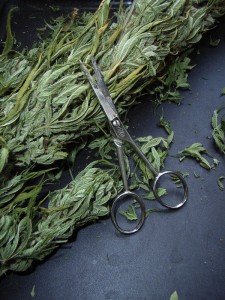 “There’s an awful lot of unemployed people out there, and this is a way that they have of making money on a cash basis that is largely undisclosed to the government,” he said. “Obviously they aren’t being taxed on it because they’re not receiving a W2 at the end of the year, I can guarantee you that.”

In 30 years with the Sherif’s Dept., Goddard said he’s busted as many as 500 grow operations. He said clippers get charged along with everyone else involved, usually with possession of marijuana, production of marijuana or possession for the purpose of trafficking.

He strongly advises people to stay away from such employment, regardless of the scale of the operation. “(Clippers) don’t consider themselves to be criminals, quite often” he said. “It’s against the law, I shouldn’t have to advise anyone.”