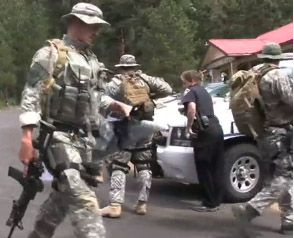 The Boulder County Sheriff’s Office along with a very heavily weaponized SWAT team along with helicopters are returning to terrorize the small town of Raymond, Colorado this morning…the site of an ALLEGED illegal marijuana grow operation.

According to reports, deputies came close to capturing a 5 foot 6 inch tall, 150 pound “Hispanic” man who they claim grew 30 marijuana plants that were recently discovered by some loud-mouth asshole who was hiking in a remote location between Raymond and Riverside.

When the task force went to the area Monday, they saw the man fleeing. “They were unable to apprehend him,” Rick Brough, with the Boulder County Sheriff’s Department, said. 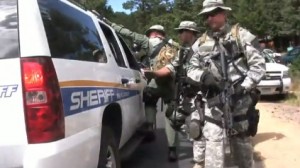 uthorities claim they did NOT know if the man was armed, but said he could be dangerous. To no surprise the SWAT team arrived all RAMBO-style with attack dogs, automatic weapons, pistols and a motherfucking helicopter to protect themselves from 30 plants and a 150 pound dude.

Luckily three schools in the area went on what’s known as “soft-lockdown” which means they kept the kids safe from the HEAVILY ARMED mercenaries scouring an area for a 150-pound, possibly unarmed, dude…and 30 plants. Imagine just how terrifying this scenario seemed to those poor kids on lockdown…one minute everything in class is normal…the next…they’re in the middle of a WAR on DRUGS zone.