Multiple Sclerosis sufferer John Wilson of New Jersey is facing 20 years in prison for growing weed in his backyard. He’s accused of first-degree maintaining or operating a drug production facility, second-degree manufacturing and third-degree drug possession. And, to make matters worse the uncompassionate Somerset County Superior Court will not allow the poor guy to use his debilitating multiple sclerosis as a defense for growing medicine!

“Possession of marijuana for personal use, or self-medication, is not a defense for the charges lodged against John Wilson,” Judge Robert Reed said. How barbaric. 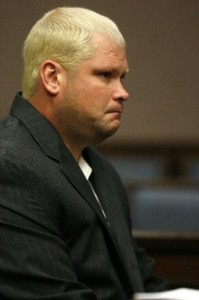 Multiple Sclerosis is a disease where the body’s immune system attacks nerve cells resulting in spasms and other health problems. Marijuana not only helps stop these spasms, but it may also keep multiple sclerosis from getting worse. Deputy Attorney General Russell Curley filed a motion asking Reed to bar defense attorney James Wronko from asserting personal use as a defense or referencing Wilson’s medical condition at trial. Wilson insists he was growing the marijuana to help alleviate the pain and other symptoms he suffers.

Currently, the New Jersey Compassionate Use Medical Marijuana Act is pending. If it does go through and become a law, patients of debilitating diseases, like multiple sclerosis, would have safe access to medical cannabis. “But that’s something for the Legislature to decide, not the Judiciary,” said Judge Reed.

“The New Jersey Constitution has reserved to the Legislature the power to legalize and legitimize medical marijuana use,” Reed wrote. “Allowing defendants to assert a medical marijuana defense where it is not relevant to the elements of the crimes with which he is charged is, in effect, judicially legitimizing the personal medical use of marijuana.”