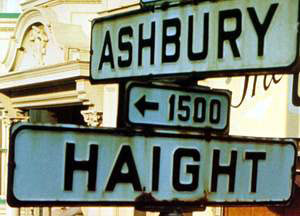 Where would be the most epic…coolest…most hip place on the planet to buy a rad pipe? If you said San Francisco’s Haight-Ashbury district than you’re not alone! Yep, the district that’s world-famous for its important role as THE epicenter of the entire 1960’s  counterculture revolution was just hit with a bullshit ordinance that would ban new head shops from opening! Sure, we’re sinking into a deepening recession so barring business makes absolutely no sense. At the height of the Summer of Love in San Francisco in 1967, the Haight Ashbury district was a magnet that drew thousands of young people from all over the country seeking a new life of freedom. How ironic, right?

Super buzz-killin’ Supervisor Ross Mirkarimi introduced the ordinance, which would prohibit the opening of any new businesses that sell tobacco and marijuana smoking paraphernalia for a period of three years, and sadly the shit passed a Board of Supervisors committee yesterday. And get this…the ban could be extended by a future board vote.

According to Mirkarimi’s office neighbors don’t want any more head shops in their backyard. Well, when you’re backyard sits squarely in the most famous place on the planet to celebrate marijuana culture and smoke a bowl what the hell do you expect? What, those residents didn’t notice the tie dye or the fuckin’ VW busses all over the damn place when they moved into Hippie-Mecca? Man, it’s just too bad the Grateful Dead dudes don’t still live there because they surely wouldn’t be the ones bitching about head shops and shit.

The ordinance passed the board’s Land Use and Economic Development Committee and will be heard before the full board on June 23, 2009.