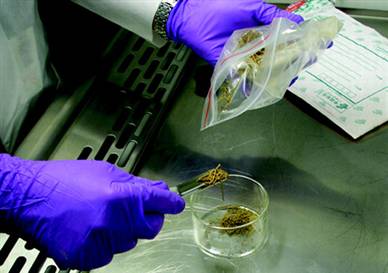 Nearly two pounds of crusty-ass old marijuana was recently found in a 2,700-year-old grave in the Gobi Desert! The stash has been identified, according to a paper in the latest issue of the Journal of Experimental Botany, as the world’s oldest marijuana stash!

After a bit of testing, it was proven that the weed possessed potent psychoactive properties and casts doubt on the theory that the ancients only grew the plant for hemp. Now we know the ancients were stoners too!

Lead author Ethan Russo told Discovery News that the marijuana “is quite similar” to what’s grown today. We know from both the chemical analysis and genetics that it could produce THC (tetrahydrocannabinolic acid synthase, the main psychoactive chemical in the plant),” he explained, adding that sadly no one could feel its effects today, due to decomposition over the millennia.

The stash was excavated at the Yanghai Tombs near Turpan, China, found lightly pounded in a wooden bowl in a leather basket near the head of a blue-eyed stoner who died when he was about 45. Reaserchers are thinking the stoner was a shaman from the Gushi people. The size of seeds mixed in with the leaves, along with their color and other characteristics, indicate the marijuana came from a cultivated strain. Before the burial, someone had carefully picked out all of the male plant parts, which are less psychoactive, so Russo and his team believe there is little doubt as to why the cannabis was grown.