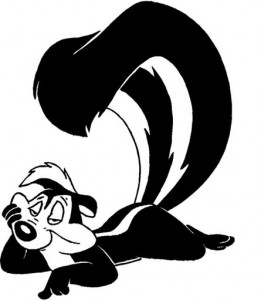 So the police up in Montée Paiement Canada confused the smell of a fuckin’ skunk living under some poor dude’s house with the smell of weed. So, thinking they found a grow-op…what’d they do…they raided the dude’s house military-style!

Thursday night an army of police officers swooped in on unsuspecting Oliver MacQuat, looking for drugs.  “I opened the door and they all had their guns drawn,” MacQuat said. “I was terrified, my heart was probably going 150 miles an hour,” he continued.

Of course, the ten cops on the scene found no drugs after they ransacked the place. But despite finding no weed, putting the dude and his son, who had come home panicked to flashing police lights and guns, in mortal danger…Canadian police are offering no apology! Not only that…they refuse to call the hostile attack on civil rights… a mistake! They told CBC News they had “reasonable grounds to conduct a search.” Yikes.

4 Responses to “Canadian Police Raid Home After Smelling a Skunk”