Why are dabs and dabbing stuff stoners like? Because more is more. Who doesn’t like more, man? So like with dabs stoners are treated to more potency, more flavor and more convenience. All things stoners like. Sure we’ll still love super-potent, snow-covered, tasty trees like Cherry Pie, Sour OG, White Fire OG, Blue Cookies, and Fruity Pebbles—all testing with more than 20 percent THC. But a whole new stoner culture is emerging around dabs and dabbing. That’s because those fine strains listed above will definitely get you stoned and they all taste amazing, but like we said more is more. And that’s exactly where dabs—which can contain upwards of 90% THC and retain a ton of taste—come in.

What is a dab?

Dabs are doses of concentrated cannabis in a slightly solidified oil form. We’re talking marijuana concentrates from butane hash oil, also known as BHO, to wax, shatter, budder and errl. (What’s the Difference Between Shatter, Wax, Crumble, BHO and CO2?) They’re all named after their consistency. Rosin, another wildly popular cannabis concentrate that you can make at home with a hair straightener, is another form of “dabs.” Obviously some dabs are healthier to consume than others. We’ll get to that but first let’s define dabbing.

RELATED: What is Dab Dancing and Why are Athletes Doing It?
RELATED: Here’s the Best Way to Pack a Vaporizer Pen

Want to get really high really fast? Dabbing is the way to do it, dude. To dab you’ll need a blowtorch, a dab rig or bong with a metal, quartz or glass nail and of course some sort of concentrate to vaporize. Now all you do is heat the nail with a blowtorch, place a bit of concentrate on top and inhale. Sure a dab rig isn’t the easiest thing to haul around. That’s why stoners adapted ecigarrettes to work with cannabis concentrates. However nowadays you’ll find a ton a vape pens built to work with dabs. We even recently reviewed a dab pen called the DipStick. Similar to the Nectar Collector but in a vape pen form—push a button, the end heats up and you vape concentrates through it like sipping a straw. 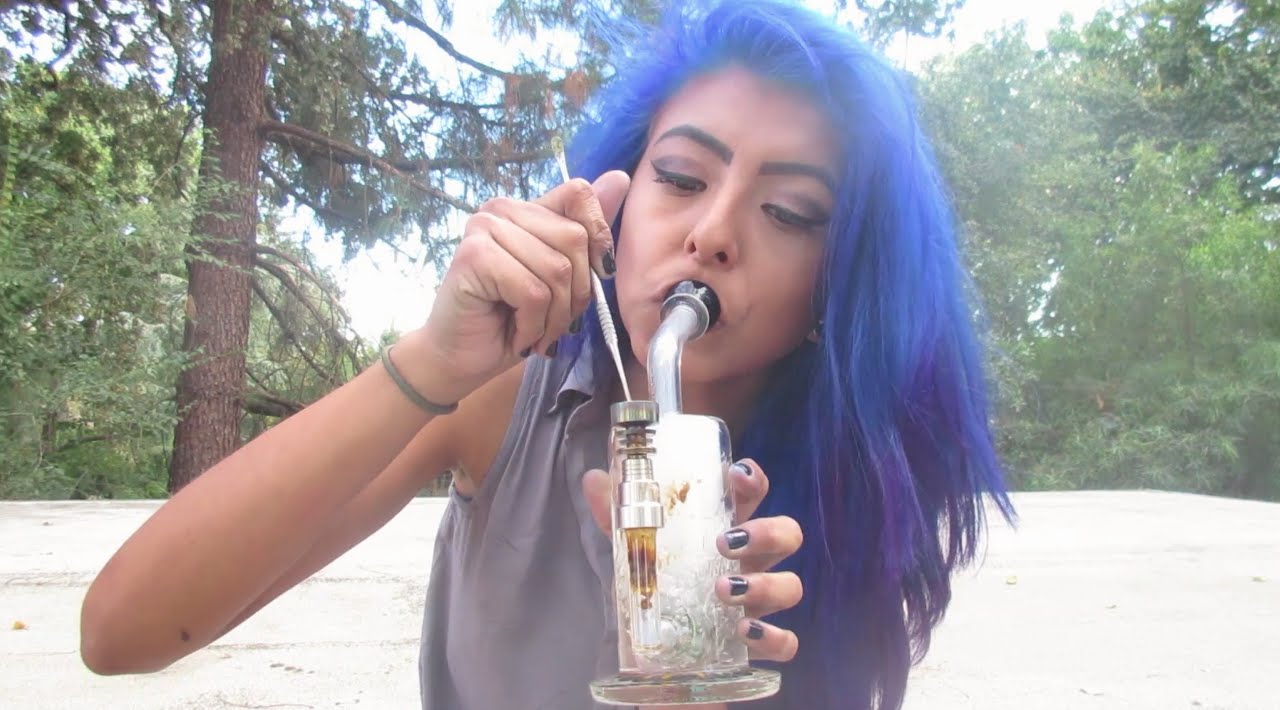 Dabs can contain upwards of 80% or even 90% THC, but typically range between 50 and 75%. And if they’re processed right they’re preserve and concentrate tons of terpenes which leads to tons of concentrated flavor. You’ve probably heard about high-CBD strains that don’t cause much of a head-high, right? The extraction process can also be designed to concentrate CBD (cannabidiol) for non-psychoactive medical use. That means you don’t necessarily always get high from taking a dab. But, taking a dab is one of the best ways to get really high, really fast. Which brings us to the part about dabs and safety.

One of the most common ways to create dabs is by using a chemical like butane, hexane or polyglycol to extract the cannabis oil from the plant. Once that’s done the chemicals are removed through heat or pressure and hopefully you’re left with a pure product. What’s left is a liquid oil of cannabis terpenes. It can be left as an oil or allowed to harden into something like shatter wax or snap and pull. Some extractors will apply heat and pressure and produce the ever popular rosin. By the way—here’s how to make rosin with a hair straightener at home.

According to Washington-­based marijuana extract company Thinc Pure co-owned by hash expert Jeff Church aka Reverend Cannabis, rosin is basically the solid form of resin or the liquid from inside the cannabis plant, which contains terpenes. “When you extract the resin from the cannabis, you bring out the terpenes (in other words, the oils and waxes—the potent essence of the plant) in a liquid form.

“Rosin Tech is already quite disruptive to the small time processing of BHO,” Church told Vice mag recently in a post about Rosin that also mentions Stuff Stoners Like. “The large producers are heavily invested in BHO, and will therefore continue making it for a while, but the small guys that open blast a quarter ounce of weed in their backyard would much rather press Rosin in a matter of seconds. Meanwhile, most larger BHO makers have at least privately admitted that Rosin is the killer new extraction method, and many have even started making it for their own head stash.”

Everybody know making BHO can be dangerous. Using the hair-straighter rosin method might be simple but it’s time-consuming and laborious. Luckily stoners have another option—newly emerging devices that will allow stoners to make dabs at home. There’s a product in development right now that will live on your kitchen counter and transform your weed trash into a stash of tasty and potent dabs. It’s called the Source from ExactCraft. It looks pretty awesome and super easy to use. Just drop in your shake or some good weed, add some high-grain alcohol, switch it on and in about 20 minutes you’re left with a nice extract your can dab or plop in your vape pen. You could also make a THC e liquid and fill your own cartridges as well.

CO2 is still one of the most preferred extraction processes. That’s because it uses no chemicals or alcohol adulterants. Rather it involves extreme pressure and carbon dioxide. The gas is used to strip the cannabinoids from the plant resulting in a highly potent CO2 oil with incredible flavor preservation. If all this stuff seems way too high tech but you still want to vaporize weed we’ve got directions on how to make a dry herb vaporizer. It may look like a crack pipe, but hey it’s better than smoking.

Anyhow dabs and dabbing is quickly becoming as popular if not more popular than flowers and smoking spliffs. Don’t believe us? Attend a Cannabis Cup or any other marijuana event and you’ll most likely see a ton of stoners dabbing and even more vendors selling dab gear. Concentrated taste and concentrated potency equals concentrated pleasure—that’s why dabs and dabbing are stuff stoners like.