On today’s edition of More Deadly than Weed, we’re going to take a look at something that most of us do on the regular, at least now that we all carry smartphones. I didn’t realize the extent this was killing people, but damn, we are definitely not well suited for multitasking. I’m talking about taking pictures. That’s right, taking pictures is more deadly than weed.

This all started from an article I came across back in 2009 for the Jamhole about a lady who fell 100 feet to her death while checking out some isolated waterfall in Bulgaria. The cause? She was taking a picture of a grasshopper, and didn’t like the way her first picture turned out, so she shifted her position a little bit to retake the photo. Her husband yells out for her to be careful, which I’m guessing didn’t’ help the situation, and she slipped. Just like that.

In doing my usual bit of research for this column, I ran across ten other stories involving people meeting their maker, all because of some photography. The selfie is also making a name for itself in regards to people doing dumb shit for the sake of a shot. If you are going to gamble, you should be prepared to lose every now and again. Which is exactly what happened in each one of these stories. 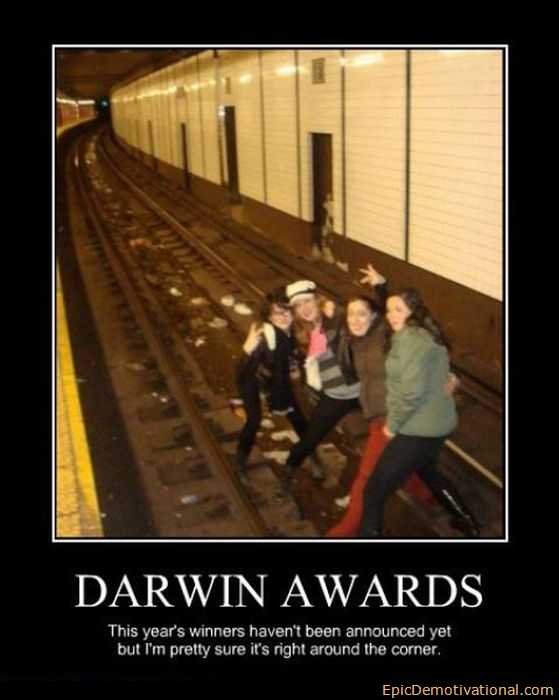 First there’s the obvious ones. If you are going to take pictures of trains, you should definitely make sure you aren’t standing on the tracks. Sure we’ve all done it, but I feel like it takes a certain kind of special DERP to get killed in the process. Maybe it’s just me, but I feel like I would know if a train was coming. I would feel the rumble or something? Maybe you are too caught up in the moment to notice, or maybe your situational awareness is just that dull.

I have two separate train photograph incidents to mention, each resulting in death for the photographer. The first happened in 2012 in Sacramento California when a 52 year old high school art teacher was taking a picture of an oncoming train.

She was standing on the adjacent track, when another train creeped up on her from behind headed in the opposite direction. Now, if Train A leaves the station heading north traveling at 60 miles per… My bad, I’m definitely not stoned enough right now for train math jokes.

But in all seriousness, just like I previously pondered, people started immediately asking if this was a suicide, because you know, trains are giant loud metal boxes hurtling down metal tracks. They make noise and shit.

One of the comments in that story even went so far as to say that, “She wasn’t “hit” by a train – she made a train conductor run her over – probably because she thought her art was worth the risk. Wow. As the story concludes, it’s definitely a possibility she didn’t hear the train, as the noise and vibration from the train she was photographing would have covered it up.

The other train accident happened more recently, in September 2014, in Santa Barbara California. This time there was four people, and get this. They were on a bridge. A motherfucking trestle, as in you have no where to run. I like this story a lot, because unlike the other story, where the lady actually had some place to go had she noticed the train coming the other direction, these people were completely stuck on a train trestle, with a really nice drop to the bottom.

So they see the train coming and make a run for it. Probably way too late, and the train wacks three of the four people. According to the article, “A woman was thrown onto the side of a hill and died at the scene. A man suffered critical injuries to the upper body and head and another woman suffered moderate injuries.” The fourth human totally made it out ok, in what sounds to me like a case of I don’t have to outrun the train, I only have to outrun my three dipshit friends.

Even professionals are not immune to this danger. In January of 2013 a professional celebrity photographer, more commonly known as the paparazzo. This guy thought he had the Beebs after he saw the kid’s white Ferrari pulled over by the police. He crosses the street after snapping a few shots, and WHAM! Smacked down by the hand of gawd! To add a little insult to fatality, the Justin Bieber wasn’t even in the car. He had let one of his friends borrow it.

In the other stories you have humans getting killed doing silly dumb shit like falling off a cliff trying to take a selfie, or slipping off an eighth story dorm room ledge to break the back and knock some teeth out of some poor unsuspecting bystander below. College, am I right or am I right?

More recently, in Chicago back in April of 2014, a guy was taking a picture of a little fender bender he got into at like 6:30 in the morning. Just there minding his own business taking pictures of the wreck, when all of the sudden POW, a large truck takes him right the fuck out.

Even more recently than that, I found this story about a pilot who crashed his plane killing himself and his passenger, all because they took a selfie and the flash supposedly messed up his flying skills. Something called spatial disorientation, which then apparently led to him crashing the plane. I love the odd borderline ironic synchronicity with this one. They crashed in Colorado, where weed is legal.

I found this story that takes place in November 2014 that, in my mind, solidifies the age old joke about hiking with friends and bears. I don’t need to outrun the bear, I just need to outrun you. This Rutgers student and his four friends decided to take a hike in West Milford’s Apshawa Preserve when they were met on the trail by a couple of hikers. They warned the group about the bear, but being curious students, they did not heed the warning. The group went further into the woods, and stopped when the bear was about 300 feet away. Perfect distance for taking wildlife selfies right? WRONG. They started taking pictures, which the bear did not appreciate. The kids turned around and started walking away as the bear was about 100 feet away from them. Once the bear got within about 15 feet of the hikers, they decided it was finally time to turn tale and run. They split up, and Darsh Patel lost his shoe in the frantic sprint.

He was last seen climbing a rock formation as he yelled to his friends to continue, with the bear right on his ass. His friends left the woods and called the cops. After searching the woods for a couple of hours, the cops finally found the bear, lingering near the body.

I imagine one of the cops was like, “Hey bear, you ate that kid, and that’s not cool. Now, we can settle this like gentlemen, or we can get into some gangsta shit. The bear was like fuck you pig, and the cops busted a whole bunch of caps in his ass. Done and done.

A necropsy of the bear showed it had a bunch of human viscera and shreds of clothing in it’s big black bear belly, as well as human blood on its paws. Darsh Patel’s phone was also found nearby with fang marks on it.

The last story I want to talk about has to do with the repercussions of taking pictures of stuff you shouldn’t be taking pictures of. The world is filled with a lot of douchey scum bags. 40 year old Kainth Davinder killed 43 year old Sandro Rottman over some pictures he allegedly took of Davinder’s young daughter. When I say young, I mean she’s under ten years old. Yeah dude, total creep show.

These guys were kicking it at Spinnaker restaurant in Sotogrande, high class resort on southern Spain’s Costa del Sol. A few days prior, Sandro Rottman was charged with possession of child pornography. Apparently he was asked on numerous occasions to stop filming his daughter.

I’m not exactly sure how the rest of it went down, but it sounds like the father, Mr. Davinder saw some videos on Rottman’s tablet, snatched it, and threw it to the ground. After that it was on like Donkey Kong, and Davinder beat Rottman to death with his bare hands. One less pedo on the streets. One more name added to the list of people who have died at the hands of shit that is more deadly than weed.

That’s right, out of all the potential Darwin Award nominees that have gotten themselves killed here, cannabis was not involved. Weed has never once tried to push you off a cliff, or make you play chicken with a train you may or may not see coming, or take creepy pictures of somebody’s child. Weed has nothing but love for you.