During a news conference at The Institute for the Study & Practice of Nonviolence in Rhode Island, U.S. Attorney General Eric Holder was peppered with questions about the U.S. Justice Department’s current stance on medical marijuana dispensaries.

“We are in the process of working [on] these issues with the U.S. Attorney for Rhode Island and other U.S. Attorneys across the country,” Holder said. “My hope is that sometime in the not too distant future … it will be addressed.” 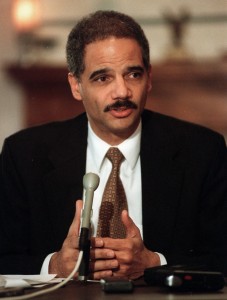 Following Holder’s news conference, Senator Whitehouse said Rhode Island’s medical-marijuana program and its plan to open dispensaries “seems reasonable and the state has spoken.” He went on to say he will continue to work on the issue with representatives from the Justice Department and Rhode Island, “so people know what the rules of the game are.”

And, knowing what the rules of the game are  when it comes to the federal legality of buying and selling medical marijuana, not only in Rhode Island, but nation wide, is exactly what’s needed in order to confidently move forward and establish the rights for not only medical marijuana patients, but also for the compassionate businesses lawfully supplying them with medicine.

2 Responses to “Feds to Readdress Stance on Medical Marijuana”