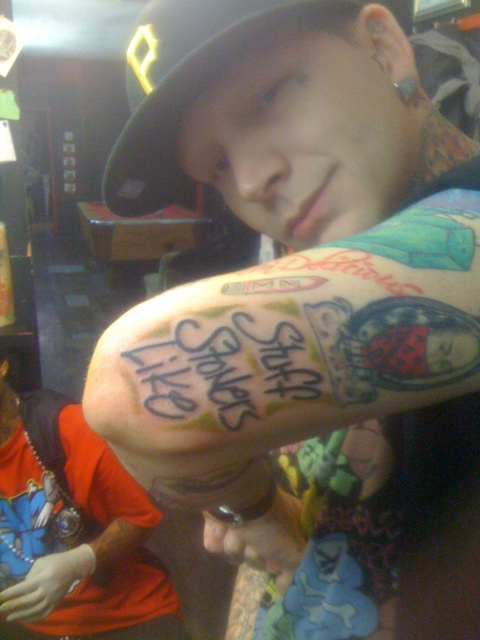 If you haven’t seen it yet, it’s not only our favorite piece of permanent advertising, it’s probably the coolest tattoo in existence. But, seriously, who the hell would be crazy stoned enough get a STUFF STONERS LIKE tattoo? Well, we asked ourselves that very same thing. Then, we asked Flip Matlock, a tattoo shop owner from the Tennessee-based, band Taco & the Mofos who actually covered his forearm in a big-ass beautiful STUFF STONERS LIKE tattoo last month. He assures us he got the piece not just because he loves us, because…c’mon…who doesn’t love us, right? He says it’s because he’s so down for the marijuana movement he wants everyone to know it, permanently and in our handwriting.

We recently got a chance to chat with Flip about weed, tats, music and probably what will be the end of all man kind; the Zombie Apocalypse.

STUFF STONERS LIKE: Holy SHIT, what the fuck did you do to your arm, dude? That looks a li’l more permanent than a Sharpie?

FLIP: I got this sick-ass Stuff Stoners Like tattoo with some green shading. My guy Jay Cruz hooked me up. Don’t worry its only permanent… STUFF STONERS LIKE: Listen, man, how are people going to notice that STUFF STONERS LIKE advertisement with all that other shit you got going on? There’s a ton of artwork on your body, dude….we’re not sure we’re getting’ our money’s worth.

FLIP: Hahahaha you’re trippin’, bra…to be honest I got the tat with no expectations. I was just high as gas prices in California and decided to get it. It really sticks out. I got it pretty bold with a little accent shading to make it pop. It’s solid black, so it really looks like it was just wrote on. I got a lot of tats but this mos’ def’ is one that gets noticed!

STUFF STONERS LIKE: What? Do you like own a tattoo shop or something, man? Half the stoners we know can’t even afford a pack of Swishers let alone pay to cover the entire outer layer of their body with ink.

FLIP: I’m pretty covered. I’d say about 70% of my body is covered in ink. I’ve been tattooing for 6 years, so I’ve been fortunate enough to be able to get a lot of ink. Yeah, I do own a tattoo shop, called  Legendary Ink Tattoos in Jackson, Tennessee. I totally understand the whole “affording” a tattoo thing.

My boy Jay Cruz and I opened the shop about 4 years ago this July with the idea of making tattoos a lot more affordable. We focus on quantity without jeopardizing the quality of the tattoo. Hell we even trade for electronics, video games, comic books whatever. If you want a tattoo we are going to make it happen. You got our word. 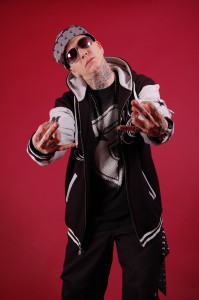 STUFF STONERS LIKE: So what’s this Taco & the Mofos thing you got going on, dude? Is it like some sorta Cabo Wabo tequila bar or something?

FLIP: Nah it’s a rock band with reggae and rap influences. Really we just guys that love making music and having a blast with life. One thing’s for sure… you will mos def get wasted at one of our shows. Hahaha. We focus on the positives in life rather than the negatives. Cool things come to those who chill. And we are mos def chillin’.

FLIP: That’s guaranteed. But all in all there for sure a song for everyone. We have so many influences that you never know what’s coming next. That’s what I love most about being a MOFO. When we hit the studio no one judges anything till it’s laid down. Complete and total freedom

STUFF STONERS LIKE: That’s right…we know you, dude. We remember you now. We sent you a bunch of FREE STICKERS a while back so you could sticker up the east coast on that tour. How’d that shit go?

FLIP: Yeah that’s me bra. Tour was tight. Smoked some serious buds. We had a blast. We usually do. We played in some new spots and really expanded our fan base. Plus I got to put some stickers in really interesting places. We are looking forward to the West Coast tour this spring. 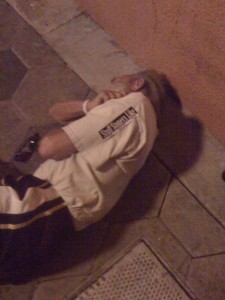 FLIP: Hahahaha damnnnn. Hell naw. I just came out of sound check. We were looking for somewhere to blaze and there’s a homeless dude sleeping on the ground. I stickered him up, snapped a pic, finished the joint and tried to offer him the roach.

STUFF STONERS LIKE: Touring would suck without WEED wouldn’t it?

FLIP: Those long ass rides would suck without weed.

STUFF STONERS LIKE: Actually doing anything sucks without WEED, right?

FLIP: It definitely  helps any situation. I mean come on, think about it. How could it not?

STUFF STONERS LIKE: Okay…consider this, you wake up one morning and everything outside your home is in ruins…it’s the fuckin’ zombie apocalypse man, they’re risin’ up to snack on humanity and take control of the earth and smoke all our weed, dude. Zombies smoking weed, it’s fuckin’ scary-we know. Anyhow, dude, it’s zombies getting the munchies…eating motherfuckers…everywhere. It’s gross, but it hasn’t spoiled your appetite. But, all you’ve got to eat is Fruity Pebbles and Lucky Charms. What the fuck’s it gonna be, man…Fruity Pebbles or Lucky Charms? 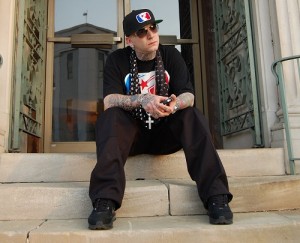 LIP: Frosted Flakes straight up. I’m gonna be like Tallahassee was with Twinkies. I’m looking for those sweet little golden flakes everywhere I go.

STUFF STONERS LIKE: Surely driving around stickering-up the world, playing gigs, smoking weed and hanging out with cool people every night isn’t the way you want to spend the rest of your life now is it? So what’s the next step for you and the band?

FLIP: Don’t get me wrong I love touring. I love traveling. We are extremely lucky to live this life, but I like my down time also. It seems to be the West Coast is calling us so we are moving the band and all to California this spring right after tour. I got a family also so this will allow more time to be with them. Not to mention the advantages a stoner has out West.

STUFF STONERS LIKE: Word. Speaking of being a stoner…how stoned were you when you got that thing, man?

STUFF STONERS LIKE: Wait…you’re stoned right now aren’t you? What? Do you like smoke weed everyday or something?

FLIP: Without a doubt. I’m a constant smoker and enjoy marijuana in all forms. The only rule that I have is KEEP THEM REGS SEPARATE. If you got a problem with ganja best not come round this way hahahaha. No, but really man, I smoke a lot….

4 Responses to “Flip, Tacos, MoFos and Stuff Stoners Like Tattoos”