If you follow our shit on Twitter, you pro’lly already heard ‘bout the 10 PROTOTYPE STUFF STONERS LIKE T-SHIRTS we gave away. And, if you don’t…what the fuck, man? You really should be following us already.

We’ve been giving away FREE STICKERS for quite a while now. And, the more stickers we gave away…the more we’d hear people say, “You guys should make shirts.” Sounded like a fuckin’ brilliant idea. We thought, how hard could it be? Well, we can tell ya now after destroying 15 shirts or so, trying paint markers, spray paint, ink, fabric paint, iron-ons, stencils and printer transfers…it’s fuckin’ hard, dude. (That’s what she said.)

Once we settled on a method, a graphic, that li’l extra somethin’ that would set our shirts apart from the competition (we’re talking about the “hidden joint” printed on the inside of the shirt)…we went to work creating 10 PROTOTYPES. Then we decided to see what people thought. So we kicked down all ten to the people on Twitter who’ve reached out to us or have made an impression on us since we started Tweetin’. And, we figured if they liked ’em and other people dug ’em…maybe we’d offer them for sale. 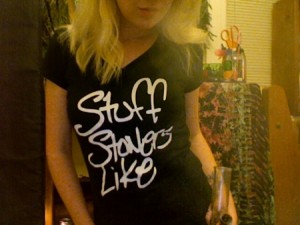 Special thanks goes out to CORAL (pictured over there on the right) who’s been waiting for a SHIRT for like six months or something…and has been a great friend to the blog. She helped us pick out the women’s T-SHIRTS…so if you don’t like V-necks…it’s all her fault. =)

And special thanks goes to FLIP from Taco and the Mofos. We had a difficult time determining what graphic to use and well…we figured if our logo was good enough for FLIP to tattoo on his arm…it’s good enough to use on our first foray into T-SHIRT design. Plus, think about all the great marketing slogans we can use as a result. How about something like “If you’re too much of a pussy to tattoo STUFF STONERS LIKE on your arm…we have T-SHIRTS”?

Anyhow, we never planned on getting into the SHIRT-sellin’ biz. We just made 10 SHIRTS…well…just because we wanted to see if we could pull it off. But, demand is HIGH and who are we to disappoint? So let’s see what happens. We’re still trying to work out a business model for selling/stocking/shipping shirts, but for now…if you want us to make one for you…let us know. Email us at stuffstonerslike at yahoo.com and put “SHIRT ORDER” in the subject line and we’ll see what we can do.

And, that’s that. Oh wait…there’s one more….SECRET PROTOTYPE ALPHA!