Imagine a disposable pipe, made entirely of ice, that delivers frosty cool hits and tastes like purple Kool-Aid. Dope, right? Now you get the idea behind the ingenious Frost Pipe.

When this thing arrived we saw the snowman logo and thought, this must be some cool stoner Xmas product. Then we realized nothing would be cooler than to fill a cooler with beer and Frost Pipes, right? Your friend goes to grab a cool and hits the pipe jackpot!

Speaking of jackpot, here’s what you get when you fork over your hard-earned bread for a Frost Pipe?

Remember that scene in the Christmas story when that kid’s tongue stuck to that fuckin’ frozen pole? Now we know what you’re thinking, dude. Will the Frost Pipe do the same thing? Of course not, man…the Frost Pipe ain’t some fuckin’ frozen flag pole. It’s more like a fuckin’ Otter-Pop that you can smoke weed with. And it comes with a handy plastic holder so your hand won’t die of frostbite or stick to your Frost Pipe like that kid’s fuckin’ tongue stuck to that pole. Does the Frost Pipe shatter into a million pieces like a really expensive glass piece when it hits the garage floor? Probably, but who the fuck cares because you can just make another Frost Pipe out of water, or orange juice or blood in about as long as it takes to freeze a fuckin’ pork butt. It’s super cost-effective and reusable, man.

Bonus: If you live where it’s really cold outside, like places where it sucks to grow marijuana but rules for playing hockey, then you’re in luck because you can just leave the Frost Pipe outside and let nature make you a Frost Pipe! If you don’t win one (see below) you can buy your very own Frost Pipe at frostpipe.com. 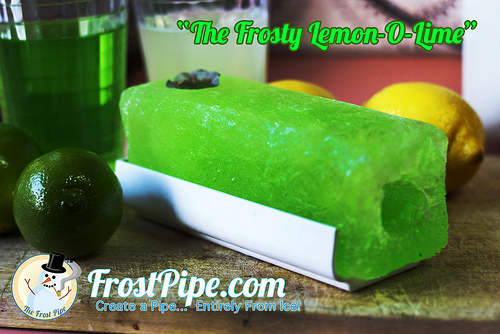 We’re giving away a Frost Pipe and all you’ve gotta do to win is leave a comment below and let us know what liquid you’d use to construct a Frost Pipe. We’ll pick a random winner (or maybe our favorite) on Friday January 2, 2015 at 4:20 PST. We’ll toss in a few STUFF STONERS LIKE STICKERS as well and cover shipping if you live in the USA, if you live abroad, shipping’s on you, dude.