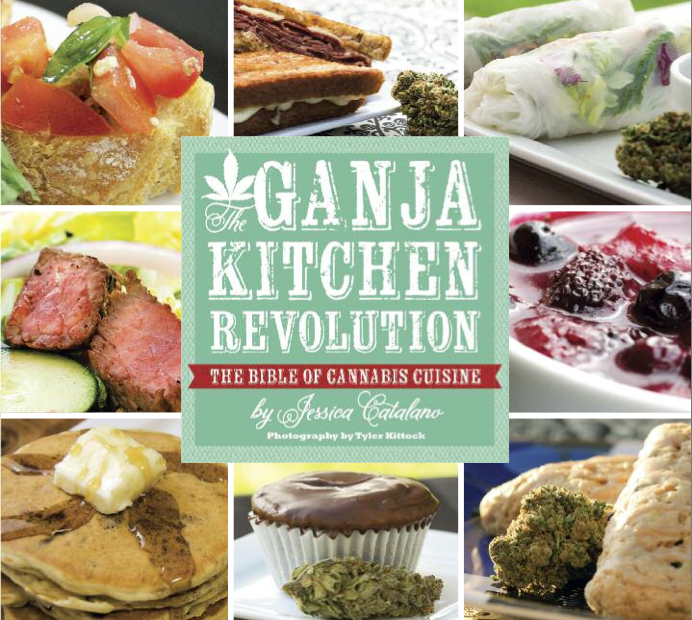 Sure, you could take a handful of shake and smash it into some cookie dough, choke that shit down and in about an hour you’ll be so STONED that you won’t notice all the li’l bits of weed stuck in your teeth. Or you could up your game with The Ganja Kitchen Revolution: The Bible of Cannabis Cuisine

. This gorgeous new 420 cookbook from Green Candy Press capitalizes on the fact that different strains of weed have different flavors and those flavors can be used to enhance the taste of food. With this book you can create food that not only tastes hella good, but will get you hella high. Win-win, eh?

So the book’s author and cannabis food-writer for STUFF STONERS LIKE, Jessica Catalano, is from Colorado, but her recipes are from all over the fuckin’ place, man. Among the 70 in The Ganja Kitchen Revolution you’ll find formulas for tasty stuff like Indian Mango Lassis, English Buttermilk Currant Scones, German Meat Loaves, Japanese Green Tea Mochi Ice Cream, to name just a few. And you know what all the delicious dishes have in common? They’ll all get you high, man. Oh and in case you’re not feeling German Meat Loaf, Catalano included a recipe for makin’ cannabutter so you can transform things like ordinary frownies into pot-infused special brownies. Or you can smear that shit on toast or use it on pancakes. Catalano also included about ten different weed-extraction methods to make weed oils, extracts and nut butters. Let’s see…we mentioned this book is all about using weed’s flavors to enhance food’s flavors. We mentioned the meat loaf. We mentioned there are 70 recipes included, the cannabutter…the sick pics. Oh ya, we almost forgot: remember like six or seven years ago when that asshole cop confiscated weed from people, made brownies with it and got national attention after calling 911 because he thought he and his wife were gonna die of an overdose? Well, luckily Catalano included a dosing chart in the Ganja Kitchen Revolution so that shit doesn’t happen to you. You’re welcome.

PRO TIP: If you eat weed and start to feel a little too high, don’t worry, just eat something else (that’s not infused with weed) and shortly you’ll feel fine.

Pick up a copy of Jessica’s book today: The Ganja Kitchen Revolution: The Bible of Cannabis Cuisine