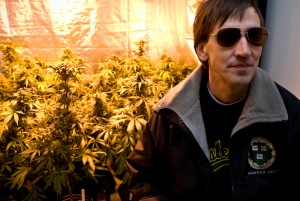 Vote YES on weed! Sounds like a solid plan, huh? Who doesn’t want safe access to marijuana or the right to smoke it or the peace of mind knowing you aren’t going to get busted for taking a bong hit? No doubt decriminalizing weed is a great idea, but voting yes on legalizing weed might have some serious implications that many don’t realize. And, that’s why there are several opponents to the current Regulate, Control and Tax Cannabis Act of 2010 that’ll be appearing on California ballots in November. And, some of those opponents own marijuana dispensaries just like the guy who’s funding this particular legislation, Richard Lee. Lee runs one of the coolest dispensaries in the area, founded the Oaksterdam University and has his face plastered everywhere as the poster boy for the marijuana industry. The dude owns about half a dozen businesses in Oakland, employs a bunch of people and even though he stands to make and gigantic profit even if the initiative doesn’t win…he’s already funneling a ton of money into the city, not to mention creating some good weed public relations.

Most everyone agrees that legalizing weed is a great idea, but the timing just might not be right. When polled last year around this time 56 percent of Californians were in support of legalization of some kind. Traditionally, we can expect about 10% of those supporters to drop off or vote with the opposition when they step up to the plate…it’s just history. So then in November we can possibly expect support to legalize weed to be down to around 46%. But let’s don’t get bogged down in the fucking details, man. These are tough times everybody.

In direct opposition to the Regulate, Control and Tax Cannabis Act of 2010 is Bruce W. Cain, Editor of the New Age Citizen and founder of the MERP movement. “MERP is a direct challenge to all of those that believe that Marijuana should be “taxed, regulated and monitored by our incompetent government. MERP claims our inalienable right to grow all the Marijuana we desire without any form of government taxation, regulation or other forms of interference. It also demands the preservation and public availability of all heirloom seed varieties and will contain provisions to analyze and detect transgenic “sophistication” of the seed line. Only with this understanding does the MERP Model allow any form of commercial taxation and regulation. The immediate benefits of implementing the MERP Model are so great that we demand that Obama implement it immediately,” says Cain. And, then there’s this other guy, one of our fucking heroes, who’s against the Tax and Regulate initiative. This guy is called Jack Herer (he’s got one of the most killer strains of weed named after him), probably the most well-known and greatest marijuana activist of our time and the author of the definitive guide to weed activism, The Emperor Wears No Clothes. He’s urging the movement to vote against the Regulate, Control and Tax Cannabis Act of 2010. He thinks the bill is flawed because it unfairly taxes marijuana consumers. Many folks haven’t heard of the California initiative that he wrote, the California Cannabis Hemp & Health Initiative, before suffering a near-fatal heart attack last year. He’s calling for all out legalization of weed without any taxation or any limitations on possession or growing which will definitely circumvent a lot of greed.

Sure, California struck down a couple initiatives to legalize marijuana already, but this is now all happening in a post Proposition 215 environment. If you’re not familiar, Prop 215 is also known as the Compassionate Use Act of 1996, a California ballot proposition that allowed the medical use of marijuana. It passed with 55.6% votes in favor and 44.4% against. The proposition was a state-wide voter initiative co-authored by the legendary Dennis Peron, an openly gay SF politician whose lover was arrested and brought up on possession charges one day. The entire medical marijuana movement and proposition 215 itself owes a direct debt to this relationship and this case. In addition to opposing the large tax aspect of the Regulate, Control and Tax Cannabis Act of 2010, Peron also sees flaws in the new law; the strict mandates on jail time for minors caught with marijuana or those 21 and over who sell weed to minors. He also says it unfairly discriminates against parents by banning smoking “in any space while minors are present”. Last we checked, you could drink a six-pack at a 3-year-old’s birthday party to no avail.

In the grand scheme of things, most people aren’t bothered by folks medicating with marijuana, it’s the method of distribution they’re worried about. It’s the actual buying and selling of weed that bothers them. Notice how nobody wants a dispensary in their backyard or wants to see someone get filthy-rich selling weed? Maybe if the movement and these initiatives focus more on the distribution method of cannabis…a law to legalize marijuana might actually have a real chance at passing.