We had a fucking BL’AST at the mighty High Time magazine’s First Annual Medical Cannabis Cup over the weekend, June 19-20, 2010 at Terra in SF. Good thing the dudes at High Times magazine dig us and kicked down the press action or we wouldn’t have been able to come within a few city blocks of the completely SOLD OUT event! It was crazy, man. The streets near the event were brimming with stoners waiting to get inside a venue that was insanely crowded and filled with so much pot smoke it looked like the fucking place was on fire. We copped a contact high just looking for parking, man.Check out the footage as we rolled up around two in the afternoon. Notice all the fire trucks? Yeah, they were there because the venue was overflowing with STUFF STONERS LIKE!

What makes the Cannabis Cup so cool is that there’s soooo much weed in one place. Let’s give you a bit of perspective here, man. You’ve heard of High Times mag’s Cannabis Cup, right? Of course, since it’s been the pantheon of pot competition for the last 20 years…held over in pot-friendly Amsterdam yearly. Well, with the proliferation of good herb over here on the left coast of the USA, the High Times dudes decided to bring the Cup back home! Originally, the Cup was patterned after Harvest Festivals here in Northern California, so it’s only right that this shit comes back home! And, the people in Nor Cal turned out in droves! Like we said, it’s killer to see so much killer bud in one place, man. Sure sure, there’s all the product hawking business in the front with t-shirts and bongs and shit right when you walk in…check the video below…

…but much like the mullet…the party’s in the back…in what was called the Prop 215 Smoking Section where there was no tobacco allowed! Thank you for pot smoking!

So there were dispensaries from all over the place entering their most stoney strains in the contest for best Sativa and best Indica and best other-type-of-shit categories, but only the judges got to samples those goods. Check out our friend Steve DeAngelo from the Harborside Health Center filling us in on his entries. If you’ve not heard of DeAngelo, you will, as he’s actively rolling out dispensary “franchise” opportunities and when you walk into a dispensary in your state for the first time…it’ll probably be patterned after the Harborside. 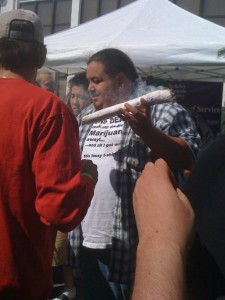 The rest of us commoners and press had to just make due with all the massive joints and massive vapor bags and massive spliffs being passed around…or one could just walk up to a hash bar or a random dispensary’s booth and buy and sample some herb or really just stand still in one spot and inhale deeply and get a nice contact high. One noticeable thing about being in a crowd of 100s of people smoking weed is it sounds a lot like being at a bronchitis convention…with all the coughing and shit.

Along with the weed and the judging of the weed…was a lot of talking about weed by people who talk a lot about weed like the High Times dudes, Danny Danko, Jorge Cervantes, and NORML Audio Stash Live’s Russ Bellville, among many other experts. We were captivated with a guy named Irvin Rosenfeld, one of only 4 remaining federal medical marijuana patients who’s smoked well over 100,000 joints rolled by the US Government, which still doesn’t recognize marijuana as medicine. We’ll have more on our friend Irv and his upcoming book about how he fought the law and those motherfuckers lost (for once)…in the future. So that’s that at the 1st ever High Times Annual Medical Cannabis Cup.

Oh wait? You want to know who won, we bet?

For the rest of the winners…check out HIGH TIMES by clicking here. No here. No wait…just kidding. Click here.