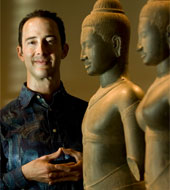 “I’ve been on the fence for years about the legalization of drugs,” says Clark Freshman, a UC Hastings law professor and the main consultant to the television show Lie to Me, “and now I’m a victim of this crazy war on drugs.”

Last month Freshman was served an invalid warrant at 7 in the morning and handcuffed in his bathrobe before SFPD and the DEA raided his home looking for “proceeds” from an illegal marijuana grow, despite Freshman’s insistence they had the wrong guy, the wrong place and an unlawful warrant.

“I told them to call the judge and get their warrant updated,” he says. “They just laughed at me — I guess that’s why they’re called pigs.”

Dean Emeritus of Golden Gate University’s School of Law, Peter Keane, says “There’s been cases like this in the past where police have a warrant to search [a single residence], then they get there and it’s a multi-unit building and they search the whole building. In those cases, people have sued and collected substantial settlements. I think whomever is representing the government better get out his checkbook.”

They better get out that checkbook quick because the hero of our story, Freshman has vowed to fight back! “Until I see [the agents’] houses sold at auction and their kids’ college tuitions taken away from them. There will not be a better litigated case this century.”