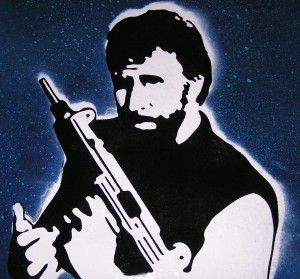 There’s no fuckin’ Theory of Evolution, dude…there’s just a list of lucky-ass creatures Chuck Norris has allowed to live, man. And it’s just been proven that one of those creatures is a super-potent strain of weed called Chuck Norris’ Black and Blue Dream!

It’s no wonder too because legend has it Chuck Norris invented vaporizing weed, dude. Years ago Chuck thought his dealer was cheating him, man and so he was like starring the dude down and shit in like a fuckin’ showdown of epic proportions. And, like the raw, focused energy transferred from Chuck’s gaze was enough to heat all the weed on the dealer’s person…enough heat for all the THC to vaporize, man, hence the invention of the vape. That killer feat alone deserves a weed strain in Chuck’s name…but that’s not all Chuck’s contributed to this whole weed game! Did you know that one time Chuck Norris killed a man with a rolling paper…twisted his ass up and smoked him?

So it’s no wonder this illusive strain, “Chuck Norris Black and Blue Dream” is the strongest, most sinister weed on the planet. Smoking this Chuck Norris weed will knock your ass out faster than Chuck’s foot to your face, man. Allegedly  it’s got like one million times the level of THC found in even the best weed. And, it’s instantly recognizable, dude. This Chuck Norris weed is covered in so many beautiful tiny li’l hairs…not only does it have a beard…it has a fuckin’ Chuck Norris mustache! Since it’s like the only thing in the entire universe proven to get Chuck Norris stoned it was named in his honor. And, it’s only available in where else, but Southern California, man…according to all the latest headlines.