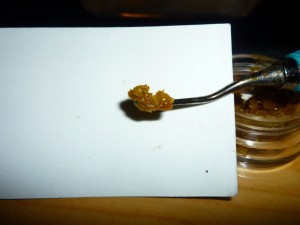 REVIEW BY: @XinckAlviso
Name: Blackwater Super Melt (Wax)
Score: 9/10
From: Harborside Health Center in Oakland @HHCOAK
Cannabinoids: Test Pending
Type: (I/S)
Genetics: Mendo Purps x SFV OG F3. Cali Connections Seeds Co. developed this strain with the goal of creating the darkest purple OG Kush crosses in existence. Mendo Purps is an Indica dominant marijuana strain that is a cross of The Purps and either a Mendocino Indica or Mendocino Madness. As the name states this strain derives from legendary Mendocino County in Northern California where some of the best outdoor cannabis flourishes in the exceptional growing environment. SFV OG is an OG Kush cutting that originated in the San Fernando Valley that is known for is high potency and additionally a sweet pine flavor.
Price: $50 a gram
Appearance/Consistency: The Blackwater Super Melt’s consistency reminded me of a marmalade jam, or thick fruit preserves that are kind of hard to spread when you have the munchies and are trying to make a PB & J! The giant flake at the bottom of the concentrate jar had a honeycomb shape to the bottom of it, a reoccurring attribute of the Super Melts at Harborside. While this Super Melt had a nice gooey look to it, it was still very easy to work with and very finely purged. The beautiful golden tan complexion of the Super Melt made this one a must try when I was deciding between this or the Sun Butter at Harborside in Oakland. Smell: Excellent terpene transfer with this batch of Super Melt, as the smell trickles into my nose I can detect the distinct scent of the Mendo Purps. That grapey aroma is a staple of the classic Indica Afghani strains. Theirs is also an underlying light piney hint from the SFV OG genetics that you will notice after two or three whiffs of the Blackwater.
Flavor: Tastes like grapes! When the wax first touched the dabber it first melts down and collects into a single wax drop before completely vaporizing, all in about half a second. The SFV OG doesn’t really come across in the flavor because it is completely dominated by the overpowering floral taste of lavender. You will be hard pressed to find a wax of this high potency that still retains this large amount of terpenes and flavor.
High: What I like to call a trickle down high, the buzz seems to begin at the back of my head before trickling down the back of my neck, past my shoulders and down my back with a swell of Indica relaxing sensations. My neck region was wrapped in a pain-relieving scarf of medication while my head felt light and body was relaxed. Couch lock begins to ensue as my attention begins to wander and concentration begins to disappear; this med is a definite Indica dominant that will require some down time after medicating. Buzz Length: As I predicted based on the potency of this med this has a very long buzz length of two and a half hours. This Blackwater is definitely a stay at home med, or something to take when you’re not going to drive or move for a long while. The couch lock affects will have you on stoner lock down.
Medical Uses: This is the perfect strain for managing insomnia, anxiety, stress, back pain, and PTSD. The overall calming effects of the Blackwater Super Melt make me feel this is more of a pure Indica strain, although with the lineage I cannot argue. While there was a bit of a head high, the entire time it softly whispered “Indica” in my ear as it lulled me to sleep.
Overall: Wow I am once again thoroughly impressed with the high quality of concentrates available at Harborside Oakland. While a lot of people shy away from a single gram of hash for a hefty price of $50, they simply do not know what they are missing out on! Personally a single gram of this amazing Blackwater Super Melt can replace a top shelf 8th of flower of mine any day! This is truly where the standards for high quality waxes and hashes should be set. This is a rather rare strain, and even rarer in concentrate form, so get your hunting caps on and head out to Oakland before the Blackwater Super Melt becomes extinct!