Review By: @XinckAlviso
Name:  Delta 559’s Bogglegum Super Melt
Score: 11/10
From: Harborside Health Center in San Jose (@HHCSJ on Twitter, Facebook)
Cannabinoids: 62.68% THC, 3.15% CBD. Test results provided by Steep Hill Labs.
Type: (I/S) A radical Indica dominant concentrate with a pungent Bubba Kush aroma and surging Sativa effect.
Genetics: BOGBubble x NL#5. Bogglegum comes from the BOG Seed Co., where it was the result of crossing BOGBubble with the acclaimed Northern Lights #5. NL#5 is a legendary Afghani Indica strain that has been successfully bred and crossed with other popular strains over the decades to create some of the finest cannabis crosses such as  Northern Lights #5  x Haze,  Shiva Skunk (Northern Lights #5 x Skunk #1), Silver Pearl and last but not least; the remarkable Jack Herer. The renowned BOG Seed Co. bred the mostly Indica BOGBubble strain from unknown genetics, although many speculate it is a Bubblegum phenotype or cross.
Price: $50/g Appearance: The Super Melt has a very doughy appearance with a bright sheen. I expected the consistency to be waxy, but was surprised to find the concentrate very stable to the point that I could easily pick off a piece with my fingers and roll it up into golden ball ready for dunking on the Ti nail. After playing with the concentrate a little I found it the overall consistency to be very putty and doughy like. It’s an impressively stable super melt, but like with all super melts and waxes after some exposure to moderate heat it becomes more wax like. After a thirty minute car ride in my pocket during the day the super melt became much waxier and a bit gooey, but after sitting in room temperature for a few minutes it reverted back to its more stable state.
Smell: Just like the flower my initial thoughts when first smelling the concentrate is that of super Bubba Kush. The intensely concentrated terpenes in this super melt absolutely pierce your nose with a sharp piney evergreen scent that is entirely too sour. The awesome zesty jalapeno smell that I absolutely love about this strain is abundant in the concentrate that gives it an unimaginably unique and vigorous aroma.
Flavor: First I dabbed a generous portion of the concentrate of my Highly Educated Ti nail after heating it up with my brand new crème brulee torch from Bed, Bath, and Beyond! I think you can find it in the Beyond section 😉 Once the super melt touched the hit Ti it melted off of the dabber in a nicely paced drip that vaped away clean and pristine with absolutely no sizzle or sparkle. I can only describe the flavor exactly the same as the smell, because that’s what it is! The flavor is a piercing super sour evergreen flavor with a zesty pepper undertone that leaves an unforgettably lovely sour lemon aftertaste.
High: The huge vapor expansion inflated my lungs with an instant dose of medication. As soon as the dab was inhaled I could feel that my medicated cap was on and I was about to enjoy one of the best concentrate highs I’ve ever had. The initial buzz was an overall wave of Indica relaxation and calmness with some slight pressure behind my eyes and a slight body numbing effect. A few minutes passed and I noticed I was very hungry, revealing the appetite inducing properties of the strain and concentrate. It will give you a slight case of couch lock, not the heaviest Indica buzz but it’s certainly not active. 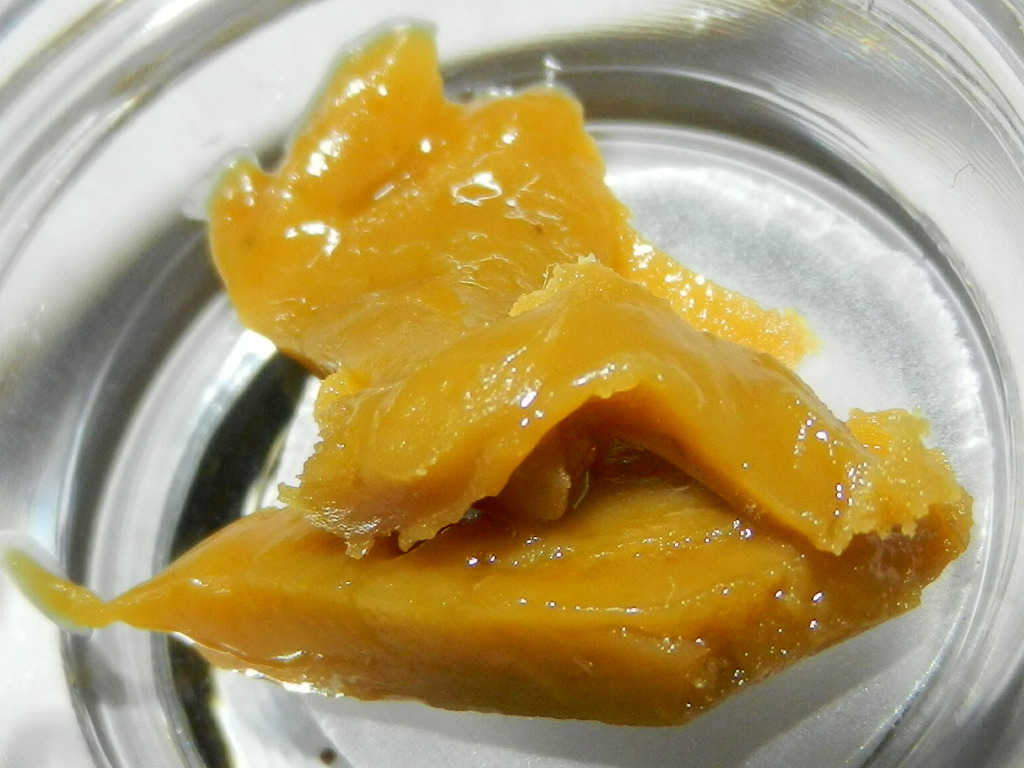 Buzz Length: 2 Hours.  A couple big dabs in and I was plenty medicated. The dabs were taken after a long day’s work and an annoying and pain inducing ride stuck in traffic. The effects of the dabs lasted me from when I first got home around five until about seven thirty after some chores and laundry.
Medical Uses: Exceptional for treating: Pain, depression, insomnia, stress, anxiety, migraines and appetite loss.
Overall: I’ve had the fortune of being able to experience about five batches of Delta 559’s Bogglegum Super Melt through Harborside Health Center in San Jose. I can say without a doubt that this was the absolute best batch of the concentrate that they have ever had since I first saw the concentrate on the dispensary shelves back in May 2011. They haven’t always had the concentrate in often or consistently, after first finding the concentrate in Harborside I didn’t see it pop up again until a few months later. Lately it seems the vendor has been more active in providing for the patient demand for concentrates that are as potent as they are clean, and from that I’ve heard Harborside will be carrying the Super Melt in a bit more often. Take my advice: If you get word that this stuff is in shop get down there or get someone down for you because it sell outs even faster than the Delta559’s Bogglegum flower! This particular batch sold out in about six hours, it hit the shelves at 10:00AM that morning and was gone by about 4-4:30PM. This is one of those rare concentrates that I’d say is almost good enough to camp out for!