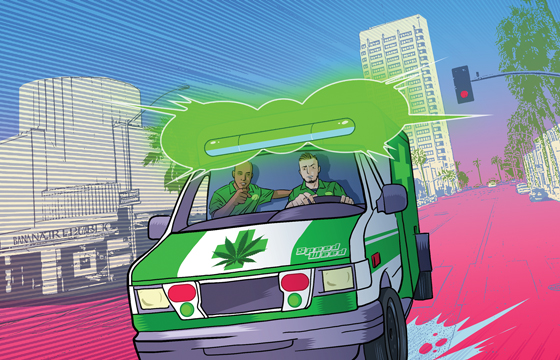 Marijuana delivery services are everywhere. Throw a rock in Oakland. You’ll most likely hit a weed delivery driver. That’s because the marijuana delivery service is hella popular in the bay area. And probably other cities that permit them. Why drive when you can sit on the couch, watching TV. What’s better than getting a pizza delivered when you’re stoned? Receiving a clutch weed delivery right when you need it, dude. Running low on herbs? No problemo. Call or click and weed on wheels is on the way, man. No more waiting for your dealer to finally call you back after you’ve blown up their phone all day. Now you’re in control. Order some marijuana. You work hard. You deserve it. Go ahead, we’ll wait.

The idea of a weed delivery service seemed like a pipe dream not long ago. However it’s a reality in many parts of the country. (Use our marijuana finder to see if you’re near one) Talk about job creation, man. Pizza guy used to be the greatest gig back in the day to make a few extra bucks, now weed delivery dude probably tops the charts.

The delivery model was proved by medical marijuana dispensaries. Many dispensaries served patients who had trouble accessing their marijuana at the local shop. So enterprising dispensary owners started offering delivery as part of their services. Brilliant idea. Bring the weed to them. Our buds at the Harborside Health Center in Oakland started a weed delivery practice a few years back. They also deliver weed from their new San Jose location. Both are awesome. Simply go online, choose your medicine, then kick back and wait for weed to arrive. It’s as easy as ordering Chinese food.

We’ve noticed an app-based pot delivery service or two pop up recently. One is called Ease, another Meadow and Nugg is another we head about recently. They all basically allow you to buy medical cannabis from local dispensaries and have it delivered. Ease often written as Eaze is based in San Francisco. They’ve got a really cool marijuana delivery app and promise to get you your herb in like thirty minutes or less. Dominoes pizza can’t even promise to get you a pie that fast any longer. The other two are awesome as well. Because pot delivery is not legal in Washington may apps had to go away.

Think of a marijuana delivery app like the Eat 24 or Spoon Rocket of the weed delivery space. That make is really simple to buy weed online. Browse a bunch of different strains like, Super Silver Haze and Green Crack, make a selection and you’ll be stoned before you know it, dude. Like if you need a San Francisco delivery these guys might be your best bet. However if you’re looking for San Diego delivery services or NYC delivery, that’s probably a bit out of these dude’s range. If that’s the case we’ve got a nice marijuana dispensary listing. You can use it to find a weed delivery service in your area.

What’s better than weed on wheels? How about weed raining down from the sky, man? Enter dank drone delivery. Don’t laugh, dude it’s true. Well it’s not actually happening, but some weed delivery company called trees.delivery got a lot of attention saying they were going to be the first to start a drone delivery service. Remember how the media took exception to that drone with a gun attached to it that some kid made? The media seemed to just love the dank delivery by drone idea. Who doesn’t want the sky filled with weed? Drone delivery is nothing new, however. Dealers have been doing that shit ever since they could get their hands on drones and weed.

How to Make a Gravity Bong
What is the Best Soil for Growing Weed?

We took advantage of a a weed delivery services in Los Angeles once. We were in Disneyland, the happiest place on Earth and lost our weed. Not such a happy place when you ain’t got no weed. Luckily we had a disposable vape pen or two to get us through Space Mountain, but still. It’s hell of difficult to find beer, let alone weed at Disneyland. So we googled dispensaries near me and also marijuana delivery LA and within seconds found a weed delivery service near Disneyland. We called those dudes and met them at our hotel lobby in about 30 minutes. It takes about 30 minutes to get a pizza and takes about 30 minutes to get weed. How cool is that? What we didn’t really dig was that by googling shit like, dispensary near me, was that we had to give up our location. So that’s why we created an alphabetical list of dispensaries and delivery services that sell medical marijuana as well as recreational marijuana in states that allow it. If you need to find marijuana use our list. One really cool thing about it is that the dispensary’s address and phone number will pop right up on your phone so you can give ’em a call or use your map app to find em.

How to start a weed delivery service?

Well back in the old days you just started selling it. Sometimes people came to you, sometimes you delivered. But nowadays shit’s changed and there are rules and regulations. And well, that weed delivery is now legal. So that sort of makes a big difference, you know taking the risk out of starting a cannabis delivery service. There’s still risk, like banks not working with your marijuana business and thieves and shit, but at least the federal government isn’t going to go after you. Oh wait, maybe your local government won’t attack your pot delivery business.

Yo, if you do want to start a pot delivery company you should launch a 24 hour weed delivery service. That’s gotta be the ultimate. You can’t even get a pizza delivered 24 hours a day. But then again who needs pizza all day and all night. Twenty-four-seven weed we can understand. Well, maybe pizza too.

Did you ever buy weed online? Let us know in the comments below…