Marijuana Smoker’s Guidebook author, Matt Mernagh is the only person in Canada who can legally grow and possess marijuana. Crazy, right? And he’s not even in any medical cannabis program either. So what’s a dude like Mernagh to do…but smoke a ton of weed? Well, maybe write a book about it of course.

And that’s just what Mernagh did. Introducing the Marijuana Smoker’s Guidebook: The Easy Way to Identify and Enjoy Marijuana Strains

, published by Green Candy Press. The book’s awesome. And reading it surely feels like hanging out with Mernagh as he waxes poetic about 150 different beautiful marijuana strains. Oh and each and every remarkable review is accompanied with a stunning photograph. To bad scratch-and-sniff isn’t a feature.

So we got an exclusive chance to chat with the 15-year veteran of weed activism and writer (Mernagh regularly contributes to the Toronto papers NOW and Exclaim! as well as Marc Emery’s Cannabis Culture). And our chat went a li’l something like this.

STUFF: How the fuck did you get to be the only dude in the world legally exempt from Canada’s marijuana laws?

MATT: I got busted growing for myself. It’s rare charge, but I told the officer I was growing the marijuana to treat my illness. I even made a video. I’ve never done that before. All the other times I’ve been busted I immediately stayed silent and waited for the lawyers. Cops hate that. Always ask to wait to speak to a good legal counsel. This time I just felt like telling the officer what I was doing because I never thought I was committing a crime.

The cops videotaped the whole interview. I explain different strains (which was something they had never heard of), temperature, and yields. The strain talk was awesome.

We spent years in court to create a constitutional argument – I should be able to grow marijuana to treat my illness. The government has a program, but access for the majority of Canadians is an illusion. I couldn’t gain access.

My trial lasted 12 days. That’s significant because I admitted to the crime. I am guilty, but pled not guilty to forward the argument. But here’s the reason—we found 22 witnesses across Canada, from big cities to little ones, and they all testified to their problems accessing the program.

The trial judge agreed with our argument. The program was an illusion for the majority of Canadians. He struck down Canada’s marijuana laws, but gave the government 90 days to solve the problems we demonstrated existed. In the interim he granted me immediate relief – allowing me to grow my own. STUFF: That’s crazy. So let’s back up. Like Buddhist say that during the Bardo stage, the soul chooses its parents and where it will be reborn. So like did you pick Canada because the Canadian flag has a pot leaf on it?

MATT: No. I was drafted by the Canadian marijuana movement in the first round and have done amazing for my team ever since. My contract is up next year and I intend to test the free agency market.

MATT: Leafs is the 3rd person and plural of Leaf while leaves is the plural of leave. Grammar may even be applied to the word kush (singular) and kushes (many kush).

STUFF: Eh, we’re too stoned for grammar. So like we hear some Canadians speak French? C3-PO probably speaks French, who knows. But what we do know is that he claimed Bocce was “like a second language” to him. So is French like a second language to you? And if so, dude, how do you say, “Know where I can score some weed?” in French?

MATT: No. But it’s easy to find weed using the international smoke a joint sign language.

STUFF: Yeah we know that sign, dude. Actually that sign works throughout the galaxy. So like, of the following dudes, who do you think would have the best ganja in the galaxy: the smuggler Han Solo, the galactic gangsta Jabba the Hutt or the interplanetary playa Lando Calrissian? MATT: Obviously Han Solo because the smuggler always keeps the best for himself. Lando would have second best weed because he too would keep the cream weed Han dropped off for himself. Jabba Hutt knows fuck all about weed – talk to his band – and Hutt’s don’t honor the smuggler code. Sometimes you get bordered and it’s the cost of doing business.

STUFF: Okay, let’s get back down to Earth, man. So uh, being from Canada you must know an awful lot about hockey, eh? So why do we always hear RUSH always being played at hockey games? 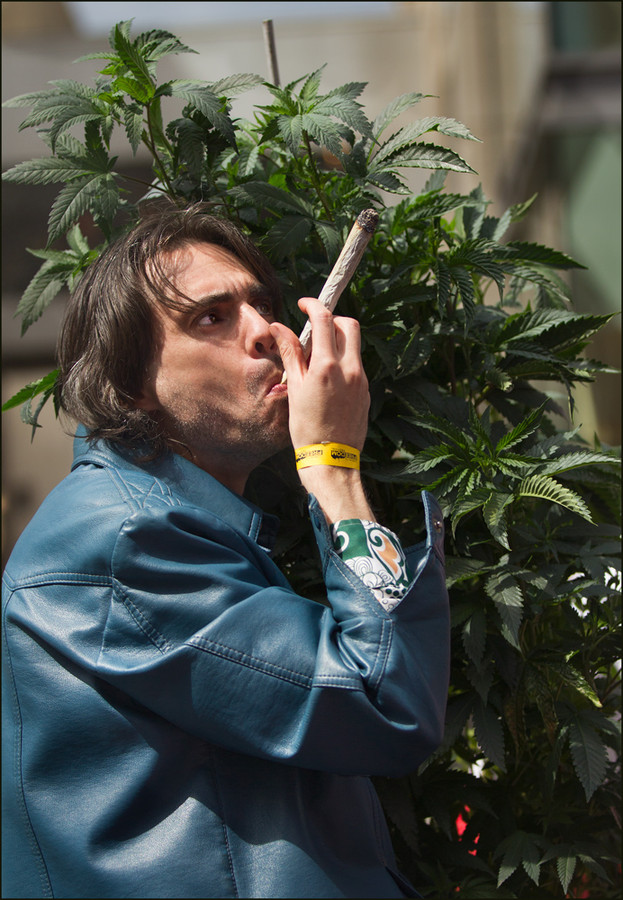 MATT: We like to keep all the good Canadian music to ourselves and export the crap. Could be worse—Nickelback. A good hockey game has to have music that turns fans into frenzied animals. My recommendation is ‘80s metal or numetal.

STUFF: Old school metal at hockey games, we can dig that. What about smoking music, what’s your fave music to listen to when you’re STONED?

MATT: Metal or indie rock. Recently went to The Postal Service gig, but listening the metal station on Slacker while writing this.

STUFF: Last question about Canada, we swear. So what the fuck is up curling? It seems like the only sport in the world that involves brooms and squeegees and shit.

MATT: We’re a nation of potheads. We’ll watch anything on television stoned for hours—even four guys or gals throwing a rock and using their kitchen mops to slow or quicken its pace. People smoke much bud during the Briar cup. STUFF: What’s that shit called that you guys eat up there? You know, fries and cheese curd and brown gravy? Putang? Guillotine? Oh wait…Poutine, that’s right? So does that shit taste better when you’re stoned?

MATT: I’ve never had poutine not stoned, so I’m not sure what poutine taste like not high. I never crave it not high and I think it goes the same for drunks. Poutine places only serve to people who are drunk or stoned.

STUFF: How long did it take you to smoke the 150 different strains of weed featured in your book?

MATT: It’s not just the smoking. That part is easy. The acquiring, photographing and sampling had to be done. Then I had to write the words while sampling and going from notes. I would start with the sativas and throughout the day get to indicas. But if I was in pain I would medicate and then start the writing process. From elevator pitch to publication the book took us two years. For book number two I suspect we can get that down to 18 months because now plenty of people want to be in it.

STUFF: Where did you get all those different strains, dude?

MATT: I grew many of them, my friends grew some, and I know dealers and dispensaries. iMedikate in Vancouver sent me home with their whole menu on two different days. When you find someone who has great weed, make friends with them. The more you associate with good weed, the more good weed will be around you.

That said people have offered me a bong rip, a bud or a joint where I’ve been ‘poisoned’ by over fertilization. I don’t mind chemical nutes but I just want a good flush. Flush your product people! I call it taking a toke for the team. The worst place I’ve experienced bad cannabis is Bulldog Cafe in Amsterdam. Do your advance work in Amsterdam and you can be rewarded with great weed. STUFF: Do you mainly grow indoor or outdoor?

MATT: Indoors mostly. The only time I grew outdoors we got busted. We put 32 autoflowering plants outside because they grow below the balcony rail. The whole balcony was nothing but weed plants. We did have 2 Mango strain pot plants that were size of christmas trees and in hindsight we probably should have hidden those two better. When I got bail the judge exclaimed, “that must be the biggest balcony in the city.”

A few months later all charges were withdrawn because of an illegal search. So never talk to the cops. Had we talked to them we would have been guilty of plenty of crimes.

STUFF: When you’re reviewing weed what are the factors you consider? Taste, smell, price, etc.

MATT: Never price, but yes taste and smell. Obviously stone plays a huge role. I smoked the weed and would often go about my day. So like if it it’s good for video games it actually means ‘I smoked a joint of this and instead of writing words I fucked off to play video games.’ Or house cleaning. How well does it look and feel. Does it break up well.

The high is critical. I’ve seen this in judging competitions. The strain that can cut through all the others and announce its arrival in the stone department is the winner. If you’re staring at the walls all afternoon that weed is perfect.

STUFF: Is there a particular strain that you’ve always wanted to try, but have not yet found? 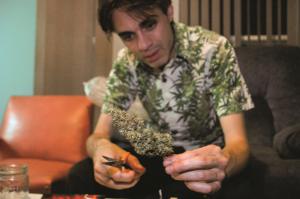 MATT: The new strains are so finkey. Grand Daddy Purple would be great because it’s a rare strain around here. Manatuska Thunderfuck—because of the name.

STUFF: In your book you give some great pointers for beginning smokers, like how to differentiate between Sativas and Indicas…

MATT: Sativa buds will be wispier, lighter, and have generally less heft. The indica buds should be chunky. Make a plop sound on a scale. A good sativa looks fragile, while an indica is going to gum up your grinder.

STUFF: Your book features only flowers. So how do you feel about concentrates, torches and dab culture?

MATT: Well dabbing is just doing a hot knife. The hot knife itself has gotten better, but I don’t think BHO has. There’s several factors that have made Butane Honey Oil popular. All cannabis in moderation. I do dabs when offered to me and too each his own. I think dabbers should grow cannabis.

No one can tell me what’s in the final product. No one. There’s no science behind taking budder and examining what it started out as and what it ended up as. It’s interesting the cocoa plant is mostly harmless until a chemical adulterant is added and the same with poppy plant.

I would never allow my buds to be slammed with a harmful toxin. I took months of great care to grow them so it seems weird to take a toxic substance to it. I’ve never tasted budder as good as bud. I don’t get the yummy smacks on dabs that do on bud. I can taste a bud months after its gone if it’s good.

STUFF: Tell us about Vapor Central and your involvement.

MATT: It’s a bring your own marijuana lounge. The place is loaded with Volcano Vaporizers and flat screen televisions. If you smoke weed its the place to do it. They have beautiful RooR bongs for rent. I do a weekly webcast (Tuesdays 720 east or 420 west) to show the world how fucking awesome we are on POT TV.

Given the venue is breaking the law by allowing people to blatantly puff down, it’s also the hub for the city’s activism. This is where we gather up Toronto Hash Mob and smoke down the powers that be. Staff are probably the upper tier of tokers. Want to meet dabbers—visit Vapor Central.

My friend Chris Goodwin has been keeping Vapor Central’s doors open now for over a five years. When he started I thought it be nice for him to have a friend spend a night in jail with when the idea got busted. It never did get busted and now the place is packed with smoking potheads.

STUFF : “Packed with smoking potheads,” eh? Right on… sounds a lot like California, man. Danks for the interview Matt and good luck with the book. Follow Matt on Twitter at: @Mernahuana