Type: 85% indica, 15% sativa (info from grower), Has a STRONG body high, used for treatment of Pain, stress, and can help with Insomnia. Great Bud for hanging out and relaxing.
Genetics: Very similar to the strain Banana kush, aside from having some sorta Sativa strain cross bread in (idk exactly wich strain was used “growers secret”) So as far as I can tell you this is a Indica dominate, sativa mix of BANANA KUSH.
Price: Since i am friends with the grower of this bud i got a really great deal, about an eighth for 20$. now he doesnt hook everyone up, but can usually do it for about 200$ an ounce or so. It is outdoor wich is reflected by the price. For the quality of tree, I’d say it is a fair/great deal for just about anyone who pick’s it up.

CHECK OUT OUR BANANA KUSH REVIEW.

Appearance: The buds are dense and crystallized with a Light green color, but i also noticed some patches of darker green. (good looking bud) they are some pretty dense little nugs weighing about a gram each. You can tell this stuff is outdoor forsure, it just has that smell and look to it. the bud’s do have some nice bright orange hairs (wich dont show up in the pic’s very well on account of the lighter colered bud).May not be the best looking bud ever but it definetly has some good qualities going for it.

Coir What Is It & Can You Grow Pot In It?
Fox Farm Ocean Forest and Growing Weed

Smell: The smell is hard to explain. it has a basic outdoor smell to it at first. you know kind of a foresty musk, like a dank Pine tree or somthing. after the initial smell comes a certain sweetness, were i can really smell the Banana kush in it. all n all id say it has a sweet sorta pinewood smell
Flavor: There’s a real banana influence on the flavor with a real sweet sweet after taste (wich i enjoyed). one thing you definetly notice is how fresh it tasted. for an outdoor crop this weed has great smokability and flavor. 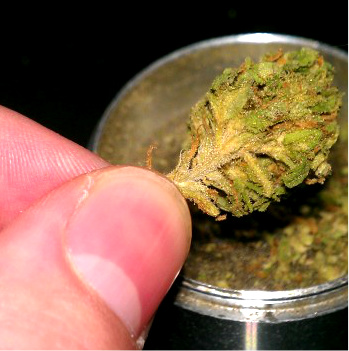 High: It had a slow come on. at first the buzz was kinda Uppity, sort of a Sativa feel, i was wanting to walk around n do somthing. but after about 10 mintues i became the classic lazy stoner sterotype, i mean i did not want to do ANYTHING, serious couch lock. After about 30 minutes the indica trait’s really started to show. i found myself with horrible cotton mouth, but decided not to get a drink cause i was to comfortable were i already was haha. i wasnt sleepy just comfortable and lazy, all n all a really good feeling high, indica dominate Fasho.
Buzz Length: The buzz wore off right around an hour and half mark, were i noticed myself getting kinda anxious, guess its time fr another sesh 😉

This was a good example of outdoor growing, but i have seen better. the bud had good smell and a sweet taste, but in the end was pretty basic. the bud had nothing special going for it besides a cool name. I dont really have anything bad to say about it, but then again there wasnt anything exceptional about it either. i gave it a 7.5, kinda like a C in school, because to me its very average.