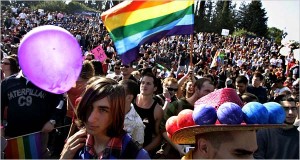 The fight for medical marijuana was born out of the struggle for gay rights. Actually, to be more specific, the right for anyone in the United States of America to medicate with marijuana is a direct result of the loving relationship between two gay men.

Sure, everyone loves those fucking Hot Tub Time Machine flicks nowadays because they’re all about the 80’s and its happy-go-lucky neon and spandex, hairy glam bands and flock of seagull haircuts, but everyone seems to have forgotten all about the AIDS epidemic that ravaged the decade. Acquired Immune Deficiency Syndrome or AIDS is the plague of our time, a disaster that’s continuing to shape our world’s history. It emerged in the U.S. in the early 1980’s and was originally referred to as the “Gay Disease” because it first appeared among the gay community. At first society felt safe, but the real nightmare began when people realized it wasn’t only affecting gays.

During the AIDS epidemic it was war on homosexuals. There were thousands of people drowning in judgment, hatred and fear all across the country. People were being brutalized, criticized, thrown out of their communities, their homes, being disowned by the ones they loved; their parents, their children.

Marijuana brought those people together. It gave many a vehicle to heal…to find solace, understanding and compassion in a community of acceptance and understanding. Marijuana provided not only much needed relief from the pains associated with AIDS but the pains associated with living in a society that feared AIDS as much as it did homosexuals. It was in San Francisco, for the gay community specifically, that the first compassionate marijuana dispensary was established. That dispensary was a flagship of hope for the downtrodden, those suffering with AIDS and those suffering as they watched their loved ones die from it. Marijuana and love was handed out liberally and organizing gave all those, not just the sick and the dying, a voice. “The entire medical cannabis movement owes a direct debt to the gay community of San Francisco” says Steve DeAngelo the Executive Director of Oakland California’s Harborside Health Center, a leading medical marijuana dispensary, “It came out of the personal relationship of two gay men and the commitment of those people to each other. There’s a very, very direct line of debt there.”

“In fact, I don’t know if everyone knows this story,” continues DeAngelo, “but Dennis Peron’s lover Jonathan was dying and the police came in and raided Dennis’s home and found a quarter-pound of cannabis.”

That Dennis he’s talking about is Dennis Peron, a legendary figure in San Francisco politics: a Vietnam veteran, marijuana dealer, AIDS activist and close friend and political associate of Harvey Milk, the first openly gay member of the city’s board of supervisors, who was assassinated in 1978 along with Mayor George Moscone. When the killer, fellow Supervisor Dan White was given a slap on the wrist after claiming “diminished capacity” because he binged on Twinkies, hundreds rioted in the streets and torched police cars. Peron missed the action because he was in jail, convicted of peddling marijuana in a converted commune on Castro Street, in the heart of SF’s gay community. “Every time they did something, they made me stronger, said Peron during the 10th anniversary of Proposition 215.” Prop 215 also known as the Compassionate Use Act of 1996, was a California ballot proposition on the November, 1996 ballot. It was the first ruling in history regarding medical use of marijuana.

“The last time they busted me was with Jonathan ,” continues Peron, “he had AIDS. Marijuana was his best medicine. The cops came in one night, while he was dying, and stole four ounces of pot that we had been using as medicine. He was 90 pounds and was weak and frail and covered with Kaposi’s Sarcoma lesions. He was the love of my life and I had to watch him from the top floor being beaten, with a gun to his head. And I decided they would never do this again.”

Jonathan West was Peron’s best friend and lover. After that vicious and merciless bust, he went to court and claimed that the cannabis was his and he was using it to treat the symptoms associated with AIDS. He insisted Peron was his caretaker and was administering the cannabis.

Soon Jonathan’s death supercharged Peron’s activism. He sponsored successful referendums for decriminalizing marijuana use and sales in San Francisco. In 1991, Peron organized Proposition P, the San Francisco medical marijuana initiative, which passed with 79% of the vote. Prop P did not have force of law, but was simply a resolution declaring the city’s support for medical marijuana. The California legislature went on to approve medical marijuana bills by State Senator Milton Marks and Assemblyman John Vasconcellos, but they were vetoed by then Governor Pete Wilson. 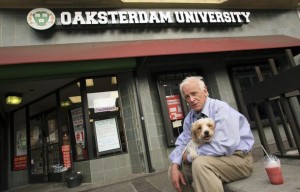 “The club took on a life of its own,” Peron explained to Stuff Stoners Like in a later interview. “When we first started the club, it was mostly for AIDS patients. Then, we started seeing different ailments and found that pot helped those people too. We’ve provided a refuge for sick people, a place of empowerment, education and healing. It’s friendly and clean. We proved that marijuana is good medicine, and that people who use marijuana are good people.”