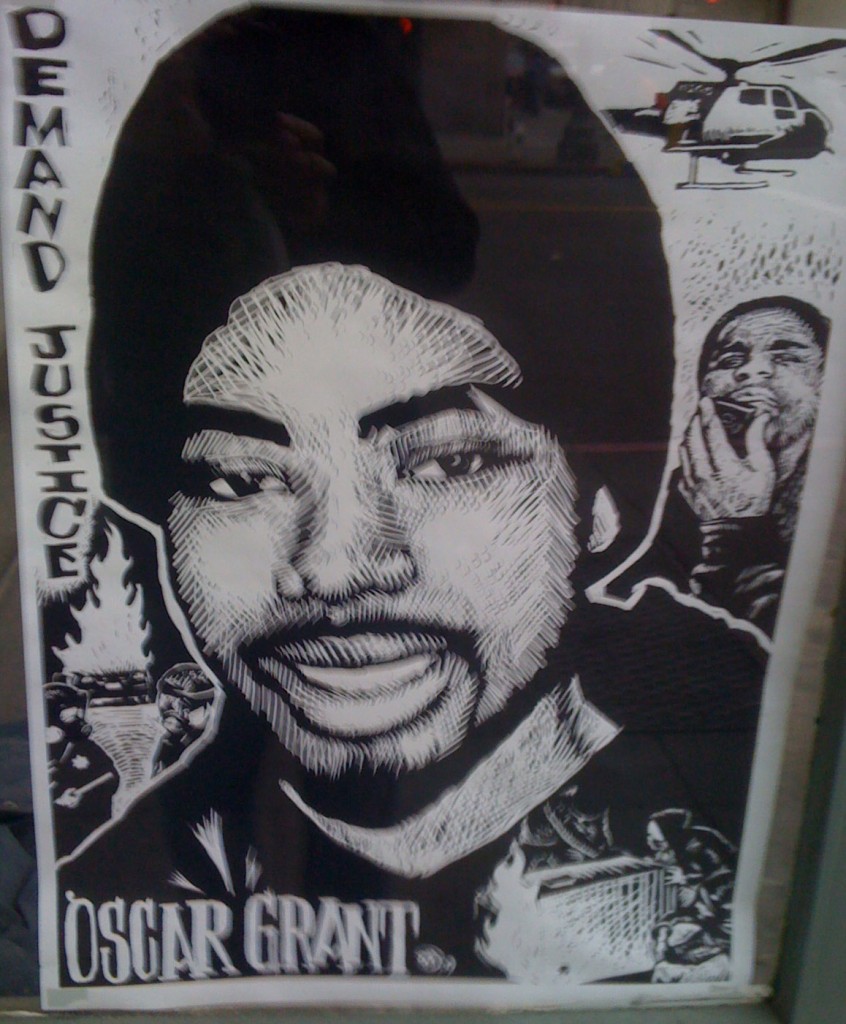 We gathered in the heart of Oaksterdam, the epicenter of our country’s nationwide Marijuana Movement among a thick crowd of nearly a thousand peaceful demonstrators protesting the Johannes Mehserle verdict and mourning the loss of Oscar Grant’s life…when suddenly we feared for our own.

As the sun set on Oakland, we didn’t realize police had been aggressively pushing protesters in our direction, from the police station and a make shift command center constructed near the east-end of downtown Oakland. Throngs of Riot Police pushed protesters away from the freeway and the Oakland police station up towards 14th street…forcing them downtown. As the crowd rapidly increased so did the tension. The involuntary manslaughter verdict was read at 4 pm and we hadn’t a clue, it was now 6:30 and we were checking our PO Box around the corner from the protest. If you’re not familiar with Stuff Stoners Like…we write about weed and kick down FREE STICKERS and to do so…we use a PO Box. FREE STICKERS is just one of our ways of giving back to our community and growing the marijuana movement and our fight to legalize marijuana. Like QUEER or GAY…we are destined to reclaim the word STONER through continually pushing the term into the mainstream with our blog and our stickers as street art. But enough about us, this is about Oscar Grant, an innocent young man who did not deserve to die! Although our paths never crossed our circumstances are similar. In fact, we all face the same situation…you see, like Oscar, we all can fall victim in an instant to racism, profiling and police brutality. As marijuana users and activists living and working in Oakland…we’ve grown accustomed to profiling, judgment, clashes with law enforcement, living under the constant buzz of police helicopters and so it doesn’t feel much like a coincidence to us that the violence and outrage that’s taking place as a result of  injustice and a horrible misuse of power…is happening in the heart of our CIVIL RIGHTS MOVEMENT. Oscar Grant was stripped of the most basic of human rights…the right to LIFE! And, an involuntary manslaughter verdict came as a cruel slap in the face to the outraged citizen of Oakland, but it was especially painful to Oscar Grant’s family, friends, and supporters. Some asshole can run a red light, hit a pedestrian and be charged with involuntary manslaughter…but what Mehserle did hardly seemed like a mere accident. 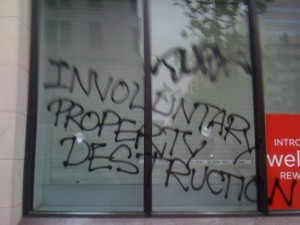 A small group of protestors with their faces hidden behind scarves, reacted to the involuntary manslaughter verdict with voluntary property destruction as around 8pm with the sun all but set, suddenly, glass shattered from the windows at Rite Aid on the corner of 14th and Broadway, across the street from Oakland’s City Hall and the famous Rotunda Building, where in an office Stuff Stoners Like began. As glass shattered all around us…chaos ensued and waves of protesters began to run. In their place came waves of what the police called, “Anarchist”, we know them as motherfuckers who came to our neighborhood not to protest, but to destroy. Police shouted over loudspeakers that our peaceful protest was now an “UNLAWFUL ASSEMBLY” and immediately began barking orders to disperse. The anger intensified and someone smashed the glass at a Foot Locker two stores down from Rite Aid. As the glass fell, people pushed their way through the flimsy security gate and made their way into the store. Some ran through the aisles and grabbed at shoes and clothes and tossed them towards the street. One guy in a black tank-top, white hat and black scarf pushed his way over the shattered glass and into the store, turned to face us all and among the chaos broke out into dance…taunting police, revelling in the media’s spotlight. Several reporters with still cameras and huge video cameras pushed their way through the crowd, flashes blazing to capture the story and ensure their readership a bit of sensationalism and eye-candy. Cameras outnumbered police, who quickly out-numbered anarchists that began heading up Broadway towards 15th and 16th street. Shoes, clothes, hangers, boxes…anything looters could get their greedy hands on littered 14th street and Broadway. 17th Street is the home of Richard Lee’s world famous, medical marijuana dispensary; Coffee Shop Blue Sky, formerly known as SR-71. Further down Broadway is his Oaksterdam University where he’s training the next  wave  of pot pioneers, activists and growers. He’s financially responsible for Proposition 19 that greets California voters this November and looks to legalize weed for all adults in the state. It is headquartered yards from the destruction. Around the corner from the fallen Foot Locker is the Oaksterdam Gift Shop, tucked safely behind a purple roll-up door. It’s where students buy their textbooks and tourists buy Oaksterdam baseball jerseys. Down the street lies the Patient ID Center, formerly the Oakland Cannabis Buyers Cooperative, which was sued by the Federal Government back in 2001 and lost its right, given by the people, to cultivate and distribute marijuana as medicine to patients in need. 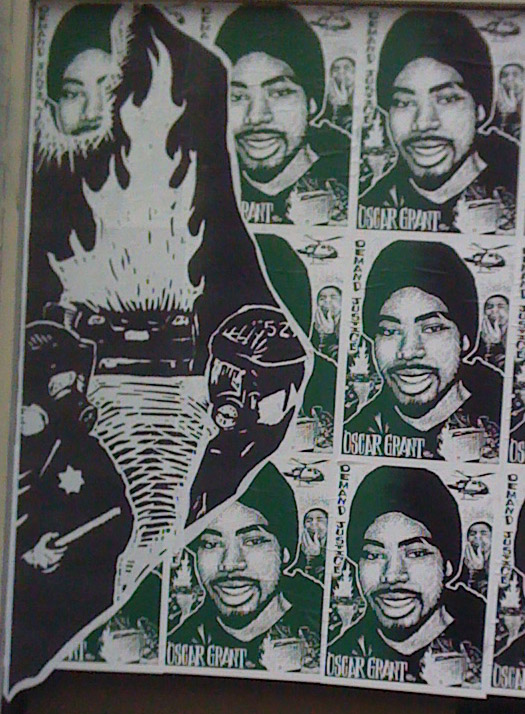 It was heartbreaking to anticipate the destruction of our monuments to marijuana freedom. As looters made their way closer to marijuana Mecca they smashed into a jewelry store near Gold Tooth Masters on Broadway and a Bank across the street. Little did they know they were passing several marijuana grow operations and the offices of the Oaksterdam News. Fires were breaking out. The newly acquired loot was tossed into dumpsters; brand new shoes, and T-shirts and shopping bags, boxes…all set ablaze. Literally hundreds of highly-armored and heavily-weaponized Police all wearing gas masks began charging us, choppers; both news and police were ominously circling over head. That’s when we realized it was time to flee. As we ran down a street perpendicular to Broadway we noticed what were thought to be SNIPER RIFFLES pointing down on us. In the dark, among chaos, with glass and debris everywhere…could snipers distinguish us from the looters, the protesters, the reporters, the “anarchists”? As we heard explosions and what we thought were gun shots, the media reports it was M-1000s…we ran. 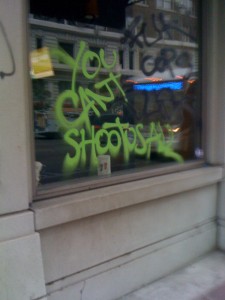 City workers swept glass and repair men replaced windows and painted over graffiti, this morning. At this moment downtown Oakland looks just as familiar as usual; gritty, honest and real, but the feeling of grief and injustice and sadness in our tiny little marijuana community feels overwhelming. This is simply what happened to us last night when we stumbled upon an assembly and decided to join a peaceful protest that quickly turned ugly. WE DO NOT WANT OUR STORY TO DIVERT ANY ATTENTION FROM OSCAR GRANT! Our blog is for the marijuana community and we do not intend for it to detract from the much-deserved focus on this trial. What happened to us was infinitesimally minute compared to what happened to Oscar Grant. In fact we feel slightly guilty reporting our story since it’s diverting attention away from the case and racism, profiling prejudice, etc…the kind of bullshit abuse occurring each day…not only to marijuana smokers, but to the youth, the uneducated, the poor, the downtrodden and especially minorities. It’s no wonder the NAACP is now supporting the legalization of marijuana as they’ve correctly identified marijuana prohibition as a tool law enforcement abuses to incarcerate, victimize, and harrass African Americans! Yesterday, in a huge happy crowd as we danced to  Bob Marley, whose music gives a voice to the downtrodden, the weak, the marginalized, and the oppressed…in front of Oakland’s City Hall moments before the rioting…we focused deeply on his meaningful lyrics;  Get Up, Stand Up…Stand Up for Your Rights. During that brief moment…we were proud of our fellow protestors, pecefully standing up for their rights. Then moments later came the sirens and shouts of ILLEGAL ASSEMBY, the threats of arrest, the looting, the fires, the mayhem. We’re heartbroken, furious and outraged that a small group of Anarchists who had no intention of honoring Oscar Grant…invaded our city and reacted to involuntary manslaughter with voluntary property destruction! Violence and destruction is not an effective strategy to end police brutality and it will NOT bring Oscar Grant back to life.

3 Responses to “Mehserle Verdict Leads to Rioting in Oaksterdam”