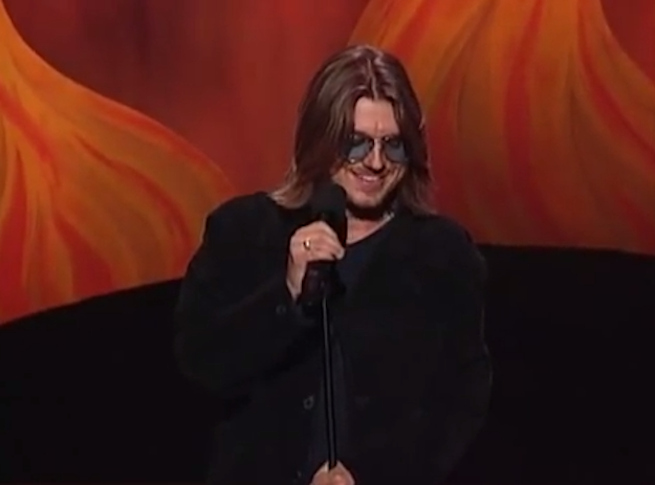 We compiled 20 Mitch Hedberg quotes just to make you laugh. You don’t even need to be stoned to find ’em funny, but it probably wouldn’t hurt. Enjoy.

20. I got a king size bed. I don’t know any kings, but if one came over, I guess he would be comfortable.

19. I like refried beans. That’s why I want to try fried beans. Because maybe they’re just as good and weren’t wasting time.

18. I think Pringles’ initial intention was to make tennis balls. But on the day that the rubber was supposed to show up, a big truck load of potatoes arrived. And Pringles is a laid back company, they said, “Fuck it, cut ‘em up.”

17. Dr. Scholl makes foot products, right? And he’s a doctor, which means he went to school for a long time. But it doesn’t take a lot to figure out that stepping on a cushion would be more comfortable. That fucker wasted lots of time at school. ‘Cause I would have bought that shit from a Mr. Scholl.

16. Mr. Pibb is the replica of Dr Pepper. But it’s the bullshit replica because dude didn’t even get his degree!

14. You know when it comes to racism, people say “I don’t care if they’re black, white, purple or green.” Oh, hold on now. Purple or green? You gotta draw the line somewhere. To hell with purple people.

13. I want to hang a map of the world in my house. Then I’m gonna put pins into all the locations I’ve traveled to, but first I’m gonna have to travel to the top two corners of the map, so it won’t fall down.

12. I write jokes for a living, man. See I sit in my hotel at night, I think of something that’s funny and then I go get a pen and I write it down. Or if the pen’s too far away, I have to convince myself that what I thought of ain’t funny.

11. You know when you go to a restaurant on the weekends, it’s busy, so they start a waiting list? They start calling out names, they say “Dufrane, party of two. Table ready for Dufrane, party of two.” And if no one answers, they’ll say their name again. “Dufrane, party of two.” But then if no one answers they’ll just go right on to the next name. “Bush, party of three.” Yeah, but what happened to the Dufranes? No one seems to care. Who can eat at a time like this? People are missing. You people are selfish. The Dufranes are in someone’s trunk right now, with duct tape over their mouths. And they’re hungry – that’s a double whammy. We need help. “Bush, SEARCH party of three! You can eat once you find the Dufranes..

10. Montana is the big sky state, and Chicago is the windy city, somehow we should combine the two to create the ultimate kite flying experience.

8. I find that a duck’s opinion of me is very much influenced over whether or not I have bread.

7. I order the club sandwich all the time. And I’m not even a member, man. I don’t know how I get away with it.

6. One time a guy handed me a picture, he said “Here’s a picture of me when I was younger.” Every picture of you is when you were younger.

5. You know, I’m sick of following my dreams, man. I’m just gonna ask where they’re going and hook up with ‘em later

4.  I don’t have a girlfriend. I just know a girl who would get really mad if she heard me say that.

3. My belt holds up my pants and my pants have belt loops that hold up the belt. What the fuck’s really going on down there? Who is the real hero?

2. Every book is a children’s book if the kid can read.