New Vansterdam stand at the vanguard of Weed

As Washington began recreational weed sales over the summer Vancouver WA’s New Vansterdam, one of the first retailers in the state, opened its doors to an eclectic mix of stoners 21 and older. Founded in March of 2014 the new shop, featuring local art and local grown, stands at the vanguard of a rapidly evolving marijuana culture where everything from what’s selling to who’s buying is quickly changing.

New Vansterdam is just one store in one state says Shon-Lueiss Harris Assistant Manager and Public Relations Consultant for New Vansterdam. But the business is indicative of the ample opportunities emerging in the marijuana industry today. “What we have seen in our little corner of the country are hundreds of jobs cropping up in agriculture, accounting, sales, business management, design and much more,” says Harris. “I saw an article recently that stated Washington expects to see roughly $700 million by 2019 from this industry alone. With such a great opportunity to create jobs and increase tax revenue, personally, I think prohibition’s days are numbered.” Bringing Pipe Dreams to Reality
New Vansterdam started out as a dream, says Harris. “Despite weeks of work prior to July 8th (the day recreational sales began in the state) actually opening took our breath away. We saw hundreds of people from all across southwest Washington, Oregon and beyond converging here to be a part of history,” says Harris. So many people came, in fact, that New Vansterdam began selling pounds of marijuana in the matter of a few hours, we hear. “Customers were shocked to be able to learn about potencies, characteristics and to actually have a choice about their flower,” says Harris. “We still see that shock today, though I’ll admit, our customers are becoming rather sophisticated as time passes.” 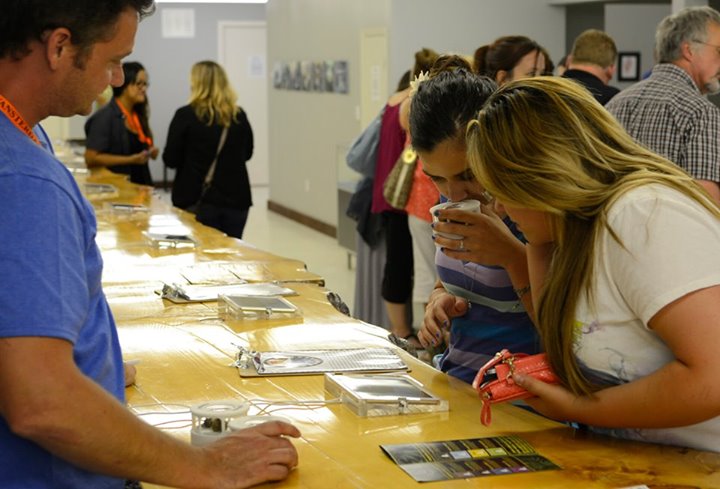 Who comprises this sophisticated stoner clientele? “Our customers include business owners, doctors, dentists, designers, veterans and more—We strive for an environment that welcomes everyone,” says Harris. Our store is designed to welcome people from all walks of life, he continues. “Washington is an oddball, culturally. We are diverse state filled with fans of artwork, music, and yes, marijuana. Countercultures are born here what with Portland in our backyard and Seattle just to the north.”

Speaking of Portland, the state of Oregon will be selling recreational marijuana this summer and New Vansterdam, who apparently have been part of Oregon’s legalization conversation from the start, are delighted. Will there be competition? “Absolutely,” says Harris, “we do not fear this. We know competition will urge both states to continue to grow and improve their marijuana laws,” he says. “Honestly, we’re just content to see more states coming online and changing that conversation on a national level.”

Unlike Colorado that essentially saw their recreational marijuana industry grow from their medical market, Washington clubs like New Vansterdam are licensed through the State Liquor Control Board. And as it stands Washington does not allow one establishment to operate as both recreational and medical. So in Washington only medicinal dispensaries can speak to the medical uses of marijuana. “What we speak to with our customers is how each strain differs,” says Harris about the differences between the two markets. “We go through potency and we speak to the characteristics of your Kush, your Ghost, your Purple and so on,” he tells us. “Our goal is to give each individual the means view all this information and find the strain that’s just right for them,” Harris explains. No license—No Deal, Dude
All the weed sold at New Vansterdam originates from licensed, recreational producers and processors. “In other words” laughs Harris, “no matter how good your brownies or bud may be—without a license we simply cannot do business.” By law all of our product undergoes potency and microbial testing, he explains. Laboratories look for contaminants such as mold, moisture content, foreign matter (i.e. seeds, dirt, etc.) and more, in addition to checking the THC and CBD, notes Harris.

The process from seed to sale in Washington is pretty straightforward. There are producers, processors and retailers. The producer is responsible for growing the marijuana. From there, the processor can create concentrates, edibles, topicals  and more from, or may handle the packaging and distribution of the marijuana. Finally, the retailer is the one who brings in the product, the information and completes sales.

Wowing Washington Stoners
Once all that weed makes it to New Vansterdam what appeals most to recreational stoners? High potency flower, concentrates and edibles are among our most asked for products, Harris admits. “The average customer prefers to vaporize, whether it is oil or flower and has a soft spot for a clear headed Sativa like Kali Mist or Cinex,” he says. “ Vaporizers are worth emphasizing—many want to indulge in a way they feel they can maintain. It doesn’t hurt that vaporizing is generally easier to handle as there is no hot smoke and the temperature control is a common feature,” he says. With vapes on the rise so are the purchase of concentrates. “From day one customers have asked for concentrates,” says Harris who didn’t see many processors producing concentrates until nearly a month after opening the club. “Even now, we are just seeing wax, hashish and various oil options coming into the market. Supply is growing evermore steady and diverse, which is a great sign for the future,” he says. And in case you’re wondering, the club’s most popular concentrates are Jack Herer Wax from Emerald Twist, Permafrost Oil from NuGreen, and Af Goo Hash from Sysco Pancho.

“The simple fact is that marijuana can be legalized and regulated to the betterment of society—Colorado and Washington have proven this much,” Harris says. “New Vansterdam is just one store in one state. What we have seen in our little corner of the country, however, suggests that the marijuana industry is a clear opportunity. Hundreds of jobs are cropping up in Washington in agriculture, accounting, sales, business management, design and much more. I saw an article recently that stated Washington expects to see roughly $700 million by 2019 from this industry alone. With such a great opportunity to create jobs and increase tax revenue, personally, I think prohibition’s days are numbered.”

2 Responses to “New Vansterdam Stand at the Vanguard of Weed”