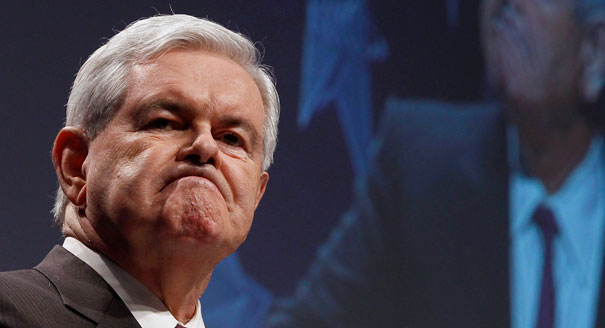 So you think Romney’s a weed-hatin’ dick just because he dodged a question from some dying pot smoker in a wheelchair do ya? That’s nothing, dude, you get caught with some BC Bud while crossing the border from Canada…and Newt Gingrich thinks you should be KILLED!

That’s right, man, ex-pot smoker Newt Gingrich thinks people who transport marijuana should be put to death, or that’s how he felt back in 1996 when he drafted, H.R. 4170, the Drug Importer Death Penalty Act which would amend the Controlled Substances Import and Export Act to “direct the court to sentence a person convicted of bringing into the United States a proscribed quantity of a mixture or substance containing a controlled substance in an amount the Attorney General has determined is equal to 100 usual dosage amounts to life imprisonment without possibility of release (or, if the defendant has violated such provision on more than one occasion and if certain requirements under the Federal criminal code are met, to death).” So you get caught bringing 100 “doses” of WEED into the country, twice and it’s death. First you’d have to get out of that initial life sentence for smuggling 100 doses of weed in the first place, but if you did, man…Newt thinks you should die.

A: Who the fuck cares?

Because killing someone over WEED is wrong. There’s no magic amount of weed that justifies killing someone. Keep in mind this law is not for “drug-kingpins”. No silly, there are death-penalty laws already in place for those guys. Newt Gingrich wrote this penalty specifically for ordinary, eryday STONERS…just like YOU.

One Response to “Gingrich Wants to Kill Marijuana Smugglers”