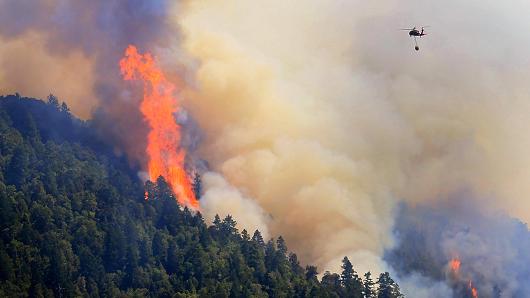 There’s a wildfire burning through dense forest in California’s Mendocino County, famous for marijuana grows. It has already destroyed more than 11,000 acres, injured eight firefighters and burned a multitude of marijuana plants. The cost has reportedly topped $20 million. And that doesn’t include the weed, reports CNBC news.

Residents were being evacuated last week when their homes and marijuana gardens—many of them illegal—became threatened by the fast moving fire. During a community meeting with locals in the area, Sheriff Tom Allman told residents that he knew there had been several marijuana gardens that were destroyed in the fire.

“Let’s talk about the ‘M’ word,” Allman said he told residents, “We are not willing to use this fire to perform marijuana investigations, but we’re also not going to put firefighters on the lines to protect it.” 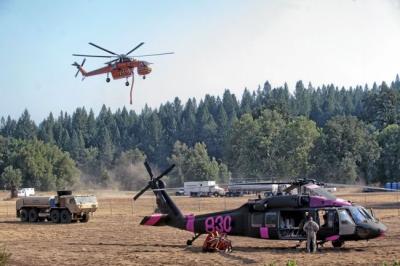 But it’s not just firefighters who are putting their lives on the line to protect property and pot crops, it’s prisoners! Apparently 750 inmates from the Salt Creek Conservation Camp near Paskenta were also fighting the fire and five were injured during their services reports Nor Cal’s Willits News. The firefighters were airlifted to the UC Davis Burn Center for treatment and were released on August 9.

CNBC didn’t mention the inmates heroics in their coverage of the fire, but they did manage to crack some jokes at their expense; “Perhaps the sheriff’s biggest concern about the marijuana going up in smoke isn’t whether to protect it, but making sure the 750 inmates fighting the fire don’t have access to the pot,” writes Jane Wells from CNBC.

“We’ve had to take special precautions, extra steps,” Allman told CNBC. “But as far as I know, no marijuana has been purposely burned by law enforcement, and none has been stolen by inmates.”

It’s interesting that Sheriff Allman took “special precautions” to ensure criminals and law enforcement alike don’t break the law while fighting a fire, isn’t it? Let us know how you feel about that in the comments below…