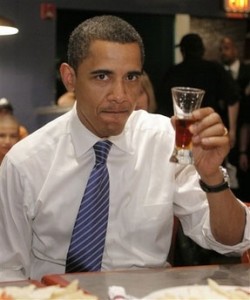 What the FUCK?!?! President Obama, the Pot-Smoking leader of the CHOOM GANG, adds a brewery to the White House instead of a MARIJUANA garden?

“There is a home brew, if you will, at the White House,” said White House spokesman Jay Carney, confirming the Obama administration has added a small beer brewery to the White House.

What the hell, man? Didn’t this guy win a few votes by declaring an end to the Federal intimidation of legally running medical marijuana dispensaries in states that enacted laws allowing them? What’s with all the support for the booze industry?

Don’t you know that alcohol kills up to 180,000 people a year? Guess how many people die from marijuana? Well, as soon as it ever happens, we’ll let you know. Forty percent of all incidents involving aggression occur while under the influence of alcohol. The police spend 22% of their time on cases involving alcohol. So why encourage the use of alcohol? Obama, you said you were going to bring us change. So what’s changed? Oh that’s right, you campaign promises. C’mon Mr. President, it’s not like you’re unfamiliar with marijuana or anything. You even famously said “When I was a kid I inhaled frequently. That was the point”.And, speaking of points, here’s ours; it would have been much cooler if you would have followed in the footsteps of our founding fathers and planted marijuana instead. But don’t get us wrong, we love beer too, it’s just your hypocrisy we don’t like.