Oregon’s Newberry Eagle spreads lies and misinformation. Take a look at the advertisement (below and online) they recently ran concerning marijuana. It makes several outlandish and unsubstantiated claims that remind us of the Reefer Madness shit Harry Anslinger conceived back in the 30s. The paid advertisement claims that marijuana is 100% harmful and addictive, that it has 50-70% more carcinogens than tobacco smoke and that daily smokers are at higher risk for emphysema.

The misinformation is provided by an anti-marijuana organization called Think Again Parents. It seems as if these dudes are looking to influence parents who aren’t all that up to date with the fact that marijuana is saving children’s lives. They probably missed that Dr. Sanjay Gupta special, or the powerful #stoptheseizures video circulating online. Emerging nearly daily is a new story about how marijuana helps kids or how parents or their children suffering trying to obtain it. In fact this morning a child had a seizure during a medical marijuana hearing at the Virginia Senate committee in front of many other children suffering from epilepsy and their parents who were all advocating for medical weed. 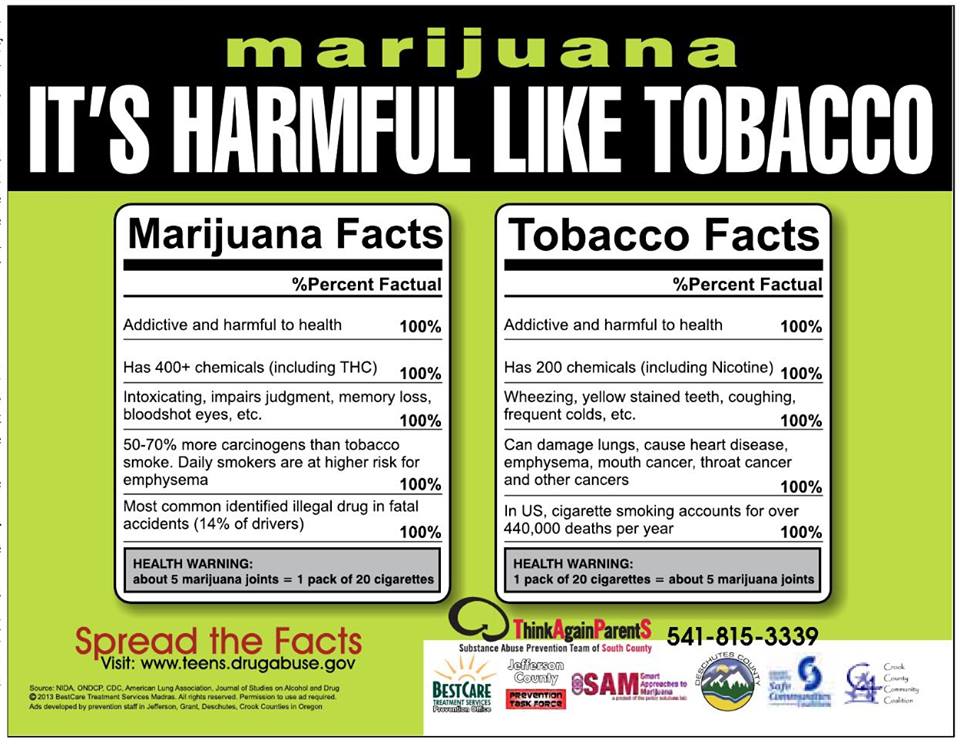 It’s so crazy that organizations can get away with spreading such lies and misinformation and small town newspapers will publish it for profit. Think about it for a second. How could marijuana even contain carcinogens? It’s a fuckin’ plant, man. Worried about carcinogens from smoking weed? Vaporize it or eat it then. Even if you do choose to burn here’s proof that smoking a joint per day over a 20-year period causes no adverse changes in lung health. This is according to data published in the journal Annals of the American Thoracic Society. So how’s that emphysema claim hold up?

Just so you know—smoking marijuana doesn’t cause cancer. It actually protects against it. But, don’t take our word for it check out this Cancer Prevention Research Journal which has a study demonstrating that chronic, long term use of cannabis actually reduces the incidence of head and neck cancer. The report states that 10 to 20 years of marijuana use was associated with a significantly reduced risk of HNSCC or head and neck squamous cell carcinoma.

Even the leading worldwide expert on lung health has said that marijuana does not cause cancer in the lungs. Donald P. Tashkin, M.D, Professor of Medicine, Medical Director of the Pulmonary Function Laboratory, Geffen School of Medicine said that there is “no association between cancer and smoking marijuana and even some suggestion of a protective effect.” And this guy was paid by our government for the last 30 years to slag weed said.

This misleading ad spits in the face of the desperate parents who are relocating to marijuana friendly states or going to great lenght—even jail trying to save their sick kids. What loving parent wouldn’t? Adam Koessler’s 2-year-old daughter Rumer Rose was diagnosed with stage 4 neuroblastoma recently. He began supplementing her chemo treatments with doses of cannabis oil and began seeing “amazing” results. However Australia, where he and his daughter live, deems medical marijuana illegal, and Koessler was arrested January 2. He was released on bail but now faces charges for possessing dangerous drugs and for supplying them to a minor. WTF?

You know what, man. We’re not going to waste anymore time on this post. We’ll just get busy writing to the dude’s at Newberry Eagle to tell them what we think about the ad they ran. And we’ll leave you with this—marijuana misinformation won’t go away until we make those spreading it go away…so follow our lead and let info@newberryEagle.com know how much they suck.