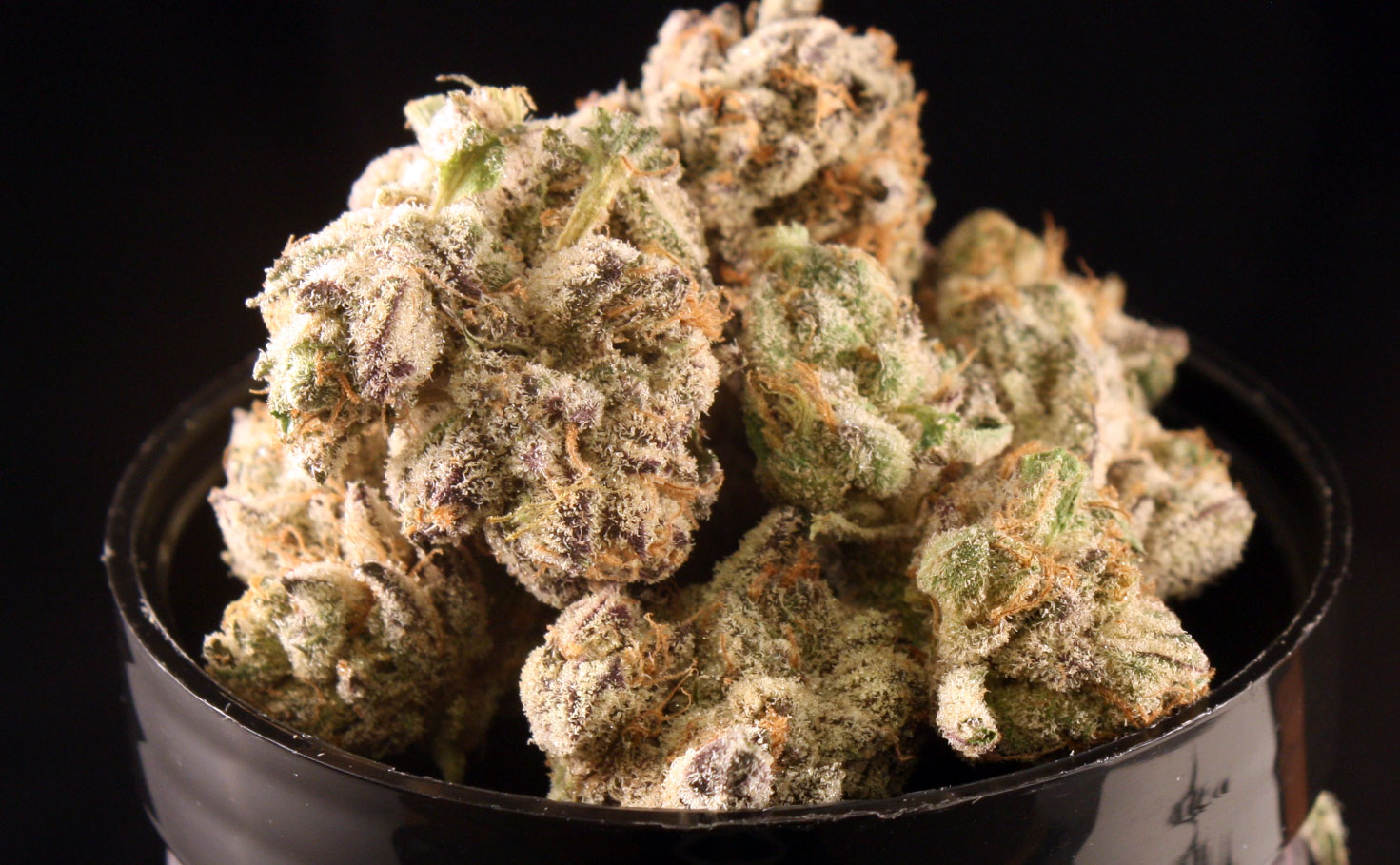 Appearance and Feels: This Platinum Girl Scout Cookies shit right here looks like some serious fire. It’s dark and dense—a beautiful example of some purple weed with hints of vibrant purple everywhere. Oh, and it’s completely covered in trichome goodness. I mean so much so that it looks dusted. But it’s not. It’s just some good weed. The pictures can show you much better than my words explain.

You just gotta see for yourself. The buds are exceptionally dense and dry, but pretty hard to break apart. Definitely something to toss in the grinder for a bomb ass spliff or joint. You’ll want to be sure to break them up good if you expect it to burn all the way through.

Smell: This Platinum Girl Scout Cookies weed has some serious sour fuel type of aroma. It’s spicy and fierce. It makes me want to take a bit of caution when blazing it up, but we’re professionals here. So fuck it. Crack the bud open and it’s instantly Kushsville. It’s pungent as fuck with an almost musty background. It doesn’t come through as much in the smoke, but it’s there. This has the look and smell of true Platinum Girl Scout Cookies genetics, at least according to the consensus of the rest of the internet.

Flavor: The first rip of this Platinum Girl Scout Cookies weed came out of the Sasquatch Beehive, one of my new favorite chilling pieces. The perfect addition to any coffee table stoner set. The taste of this herb though is ok. It’s not great or anything, but it’s not bad either. It’s just some good ass weed. This could be partially due to the harvest date being exactly on my birthday back in October, or just the way this particular weed plant was grown. I’m definitely not a grower by any means. But I think the more you try to push the trichome growth to these higher and higher levels, you start to sacrifice something in other regards. Terpenes being one of those.

High: The Platinum Girl Scout Cookies buzz is nice. It’s relaxing and euphoric and happy and intellectual and everything else you want a good batch of cannabis to be. It isn’t super overblown with THC content to overwhelm your system, so I would definitely recommend this for those newer smokers out there who want a taste of some classic strain without the dick in the dirt feeling some might bring with.

Overall: The Platinum Girl Scout Cookies weed grown by Seattle’s Private Reserve is some pretty decent stuff. It looks and feels like some top shelf cannabis, I just wasn’t super impressed with the smell. But of course, this is just one stoners perception to a reality that doesn’t really exist. It’s physics yo. If you want to check out the strain that made you drool in these pictures, then head on down to Growers Outlet, or wherever else fine cannabis is sold in Washington. This stuff is definitely stuff stoners like.