Some things never change. As the ACLU’s new Uncovery tool points out marijuana use is roughly equal among blacks and whites, yet blacks are 3.73 times as likely to be arrested for marijuana possession.

What’s the orgin for such racial bias? The answer is Harry Anslinger. And forensic pathologist Cyril Wecht knows it. In The Mythology of Marijuana, a piece he wrote for the Pittsburg Gazzette, he claims Anslinger’s legacy of lies is what’s prevented doctors from prescribing marijuana for the past 70 years. He also reminds us of Anslinger’s blatant racism. America’s first commissioner of the Federal Bureau of Narcotics claimed such bullshit as:

“There are 100,000 total marihuana smokers in the United States, and most are Negroes, Hispanics, Filipinos and entertainers. Their Satanic music, jazz and swing result from marihuana use. This marihuana causes white women to seek sexual relations with Negroes, entertainers and any others.”

“… the primary reason to outlaw marihuana is its effect on the degenerate races.” 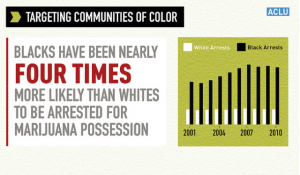 Anslinger’s lies and racial bias have remained unchallenged by the lamestream for decades. “It is long overdue for the legacy of scientific ignorance, racial bigotry and political fanaticism that has seriously damaged so many lives to be exposed, dissected and buried,” Wect says.

Burrying that legacy, however, threatens the livelihood of guys like Charles H. Lutz, a federal narcotics agent who has dedicated the past 32 years of his life to marijuana interdiction. Lutz has done extensive research on Harry J. Anslinger including a review of his personal papers at Penn State University. And get this, Lutz wrote in the Pittsburg Gazzette, “it’s unlikely Anslinger was a racial bigot.”

He makes unsubstantiated claims that Anslinger hired narcotics agents of all races, ethnic groups and religions including the first African-American agents and a Chinese-American agent believed to be the first employed by any law enforcement agency in America. He also makes an unsubstantiated claim that none of the racially biased statements all across the Internet attributed to Anslinger are known to have been uttered by him.

Whether Anslinger’s propaganda influenced it, racial bias still plays a key role in marijuana arrests as proven by the ACLU. And as proven by Lutz’s eagerness to defend Anslinger there are still federal narcotic agents willing to ignore racial bias and defend a counterproductive occupation that costs tax payers $3.6 billion a year.