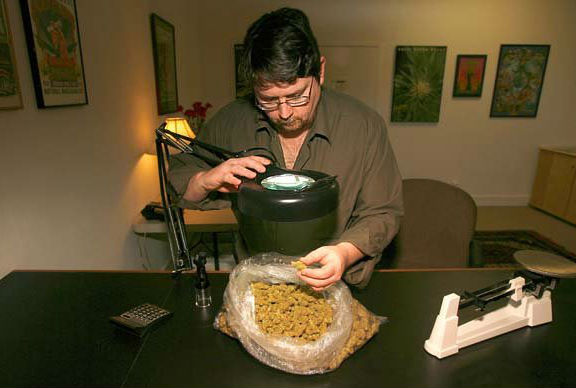 Rick Pfrommer is a Marijuana Hero

Risking his freedom for years, along with some well-known friends Rick Pfrommer was instrumental in California’s legalization of medical marijuana in 1996—the spark that ignited the firestorm of marijuana reform we see today. He first tried weed at 12 years old, started his activism career as an intern for NORML at 19 and by 20 realized he and the herb had a bright future together.

It was 1979 when I first tried cannabis laughs Pfrommer, the Director of Education at Oakland’s famed Harborside Health Center—one of the nation’s leading marijuana dispensaries which takes in more than $20 million a year in gross earnings. “Columbian was the first cannabis I had ever tried,” reminisces the connoisseur who while working at the Harborside has handled more varieties of weed than anybody on Earth. “And you know what’s funny is that I definitely didn’t get high when I initially tried it. The first time I got high was on Indica—some great, green, sticky California bud,” he says with a grin. “I was probably sixteen. And it was a revelatory experience.”

Becoming a Career Connoisseur
That revelation led Pfrommer down a career path he’s still pursuing today more than thirty years later. “I started selling weed in 1983 during my freshman year of high school. I realized that cannabis was a good avenue to making money,” he says. “More importantly, for me as an awkward teenager, it was great for my social life. I rapidly went from a quarter ounce dealer to supplying all the other dealers in college. By the time I was 19 or 20 I was able to pay my way from then on with cannabis money.”

Days after NORML’s founder spoke at American University in 1987, Pfrommer joined the marijuana reform organization as an intern. “I couldn’t believe they actually paid money for someone to go do marijuana work,” Pfrommer recalls. “It was fantastic.”

Housing the Hemperor
And then Pfrommer met the Hemperor, Jack Herer—the ultimate marijuana activist. It was at a Dead concert in 1987 that the two initially crossed paths. Pfrommer hosted the Hemperor when he arrived in the nation’s capital the following year. “Jack came to DC doing research on his book, The Emperor Wears No Clothes and he actually lived in my house for different periods of time,” Pfrommer recalls. “I think the longest he was there was about six or seven weeks—he showed up with his van, his dog and his entourage.”

Check out our Top 10 Stoner Quotes of All Time.

Pfrommer and a dozen other DC marijuanistas lived together in a ten-bedroom Victorian on Butternut street close to Walter Reed Hospital. In the late 80s and early 90s the “Nut House” emerged as action central for the East Coast reefer resistance. Pfrommer lived there with his future employer Steve DeAngelo or “Stevie D” as his buds called him.

“DeAngelo supported Herer financially while the Hemperor was in Washington updating his book,” writes Martin Lee in Smoke Signals: A Social History of Marijuana—Medical, Recreational and Scientific

. “And when Jack was ready to hit the road with the new edition and spread the word, Stevie D kicked in fifty grand to underwrite a fourteen-city ‘Hemp Tour’ in the heartland.”

What grew into a nationwide phenomenon, Hemp Tour started when Pfrommer, Herer and a few others began to advocate for legalization on the road. “We started doing a Hemp Tour with Jack and traveling around the midwest in ’88 and ’89 going to college campuses and state capitals promoting legalization,” says Pfrommer. The group crisscrossed the nation gaining members and momentum for more than five years.

As much as Hemp Tour was a rolling party, it was intense. “It was a lot of work. We were driving a hundred or two hundred miles a day to get to an event someplace and then would stay at somebody’s house and crash on the floor or sleep in the vans or the bus and get up the next day and do it all over again,” remembers Pfrommer. At it’s peak there were three caravans on the road at the same time in different parts of the country. During the fall of 1991 they did 125 events in 33 states.

Goldsberry Joins the Ganja Bandwagon
It was on tour that Pfrommer met Debby Goldsberry. “Jack and I were going through Champaign-Urbana when we found Debbie, he says. “She literally jumped on the bus with us, came back to Washington DC and started doing politics with us,” Pfrommer reflects. Goldsberry was charged with planning and coordinating the next Hemp Tour—a 17 state excursion that featured a rotating cast of speakers including Jack Herer, Ed Rosenthal, Dr. Tod Mikuriya and several other prominent marijuana advocates. Together Goldsberry and Pfrommer founded the Cannabis Action Network (CAN). Goldsberry later went on to co-found the Berkeley Patient Group—California’s oldest marijuana dispensary and the first to employ a future Pfrommer.

It was “Hash Wednesday” at the University of Illinois in Champaign-Urbana in 1988. Several hundred students gathered for the annual April outdoor pot smoking celebration. Goldsberry was a 19-year-old sophomore looking forward to a stoned afternoon, but the police weren’t having it. “A melee ensued as cops in riot gear bloodied peaceful participants with billy clubs and arrested nine people. This unprovoked assault was a galvanizing event for Goldsberry,” writes Lee in Smoke Signals

, “catapulting her into a lifelong career as a cannabis activist.”

“Those days were crazy. There wasn’t a lot of love  in the world for weed, but people wanted our information,” says Pfrommer, “because during that time there was a lot of fear and ignorance about weed. It was the height of the drug-testing days and people all over the country were losing their jobs—people were going to prison for growing five plants in Indiana or something.” Everywhere we went people had been abused by the War on Drugs, said Goldsberry in Smoke Signals

about the political climate during the time.

High Friends in High Places
As the Hemp Tour days concluded Pfrommer moved to Hawaii and learned to cultivate cannabis. Returning in 1997 he worked for several years selling organic nutrients and growing pot. In 2004 he moved to the Bay Area to take on the General Manager gig at Goldberry’s Berkeley Patients Group for a couple years. He then helped his old “Nut House” friend, Steve DeAngelo, found Oakland’s Harborside Health Center in 2006.

“One day we were at the NORML office complaining that we didn’t have any pot,” Pfrommer tells us about the time he first met DeAngelo. “This is like crazy we are the National Organization for Reform of Marijuana laws and we are sitting here and we don’t have any pot, I shouted. And that was when Dana Beal, the founder of NORML, told us to follow him.” They arrive at a carriage house and bang on the door. “Steve (DeAngelo) pops his head out,” laughs Pfrommer, “and Dana was like, ‘they’re cool they work for NORML.’” Sure enough Pfrommer chuckles, “within a week I was working for (DeAngelo). My first job was to break up fifty-pound bales of pot into single units. Soon after that I was selling pounds.”

To this day Pfrommer is still involved in selling pounds of pot—whether it’s through educating the Harborside’s staff on the latest trends in marijuana, writing about cannabis for a myriad publications or judging it at events. “Our small group family has been at the center of everything for the last 25 years,” says Pfrommer looking back at his cannabis career that began by selling small-time bags in high school to co-founding a big-time dispensary that takes in millions of dollars a month.

Is there a MARIJUANA HERO you know about that we should cover? Let us know in the comments below…

5 Responses to “Rick Pfrommer is a Marijuana Hero”