Everybody knows Shaggy smokes weed. But what they don’t know is that he and the rest of the Mystery Inc. gang star in a new cartoon movie with the self-proclaimed hottest band in the world—Kiss.

Shag, Scoob, Daphne, Velma and that dork who always wears an Ascot travel down to the newly opened KISS World theme park. Which is funny because Kiss starred in a movie called Kiss Meets the Phantom which took place in a theme park.

In the movie Mystery Inc. is set to check out a Kiss gig on Halloween night. And of course upon arriving those motherfuckin’ meddling kids discover that some hater called the Crimson Witch wants to fuck everyone over by destroying the planet. She’s got a great plan too. Apparently she’s going to summon “The Destroyer” from the alternate dimension of “Kissteria.” Which means Kiss and Mystery Inc. need to unite forces to save rock and roll and the theme park from impending doom. 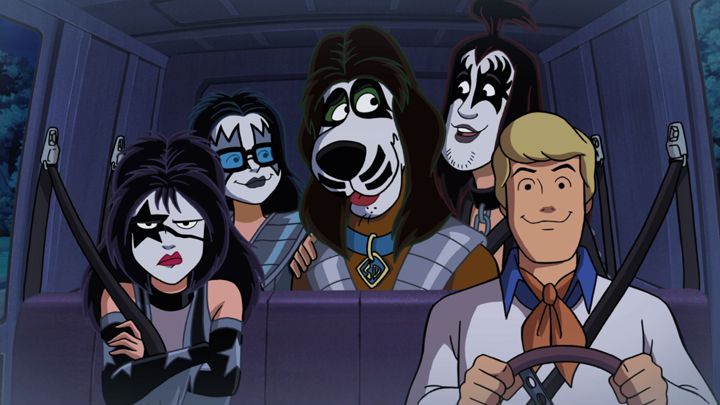 We hear the new flick features the voices of original Kiss members Gene Simmons and Paul Stanley along with Eric Singer and Tommy Thayer. The glam band’s original guitar-slinger Ace Frehley and drummer Peter Criss are currently out of the band so they don’t get to work with Scoob and Shaggy. The cartoon also includes the voice of pot-loving Kevin Smith, element number 71 on the Periodic Table of Stuff Stoners Like, as well as Jason Mewes, Jennifer Carpenter, Pauley Perrette plus Garry and Penny Marshall. Oh yeah that dude from Hootie & the Blowfish, Darius Rucker, also makes an appearance. But don’t let that stop you from watching—although it did stop us.

The soundtrack not only includes a bunch of old Kiss songs, the band recorded a new tune specially for the film called “Don’t Touch My Ascot.” Sure it’s about Fred—who really needs to smoke some weed and lighten up a little, man. is the twenty-fourth film in the direct-to-video series of Scooby-Doo films. We were too high to remember tell ya that it was released digitally on July 10, 2015, and was released on DVD and Blu-ray on July 21, 2015. Better late than never, right?