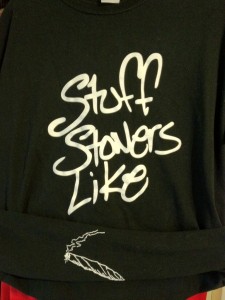 We are honored and excited to participate on the social media panel at the 4th Annual High Times Magazine Medical Cannabis Cup in SF today. We’ll be speaking today on The Impact of Social Media in the cannabis community. So for those who can’t joins us…here’s our take on social media. It’s an extension of the Internet—a peer-to-peer network where nobody is in charge…because everybody’s in charge. And social media allows us all to participate and own a portion of the internet allowing us to communicate, share, collaborate and organize equally, without a centralized governing authority telling us what to do or what information we can or can’t share.

And just like the marijuana movement, the Internet can’t be stopped. It belongs to all of us. A huge marijuana field gets destroyed by the DEA, another one pops right up. An activist or dispensary owner gets busted, another one is right there to take his or her place. The Pirate Bay get’s shut down, more file sharing services pop right back up to replace it. The Internet, much like marijuana, can’t be controlled by just one person. Or by one government.

So, we’re proud to be a part of the movement. We’re proud to participate in disseminating information, enabling organization and creating a platform to spread the truth about marijuana. We’re STUFF STONERS LIKE because we recognize that there’s power in numbers, that we’re all just peers.  We’re equals and we love weed and stoner culture equally. And together we’re organizing…no…we’re uniting the STONERS of the world to put an end to marijuana prohibition worldwide. and in the immortal words of our hero Danny Danko FREE THE WEED.