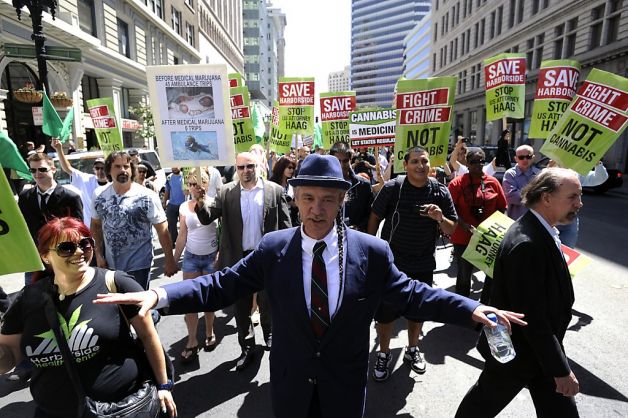 HIGH TIMES magazine is returning to the Bay Area for the 2015 HIGH TIMES NorCal Medical Cannabis Cup on June 20 – 21. This time they’re sparking up at the legendary Cow Palace where Evel Kinevel once jumped over some buses and shit on a motorcycle and the Who’s Keith Moon passed mid-gig because he was high as fuck on horse tranquilizers. Should be fun. Not only will the legendary reggae group Steel Pulse perform on Saturday night at the event, but our bud Steve DeAngelo, founder of the Harborside Health Center in Oakland and San Jose and star of Discovery Channel’s Weed Wars will be honed for his four decades of dedicated pot activism and advocacy. Should be fun.

Like the last few years the event will be filled with plenty of pot smoke—smoking on site is allowed with a cannabis card, as well as cool vendors and the like. Plus the mag’s world-renowned cultivation editors, including Danny Danko (Element #99 on the Periodic Table of Stuff Stoners Like) will be onsite holding informative seminars and grow classes that you pro’lly won’t want to miss, man.

“It’s really a huge honor for me because one of my very earliest role models in the cannabis industry was a gentleman named Tom Forscade who i met about two years before Tom launched High Times magazine,” DeAngelo tells us about being honored by the groundbreaking publication. “Some of my earliest experiences in the cannabis industry were running errands for Tom. And I was there when the first High Times came off the presses—Ii’ll never forget the day they rolled in. They just looked so amazing—a glossy, slick, super-well produced magazine all about cannabis. It was just amazing”

I’ve known Steve DeAngelo for 25 years, Dan Skye, Editor-in-Chief of High Times tells us. “He was always one of the most creative cannabis business people I’ve ever known. He’s been an arch-aactivist, a hemp entrepreneur and, now, the innovative leader of the nation’s most progressive dispensary. Steve is one of the pioneers of our community and we’re honored to present him with the HIGH TIMES Lester Grinspoon Lifetime Achievement Award.”

Back in his office in Oakland, California, DeAngelo says that if you look at his work through the years at Ecolution, Harborside Health Center, Steephill Laboratory and Arc View Group, he’s really followed Tom’s model of expressing radical politics through a pioneering corporation. “High Times is the OG of all cannabis magazines and I’m tremendously honored to be honored by them.”

DeAngelo has been featured by The New York Times, The Washington Post, CNN, the Associated Press, The Wall Street Journal, NPR, and the BBC; Fortune magazine and literally every major network news source in the country, but most importantly he’s been featured several times here on Stuff Stoners Like. Apparently he dug our shit so much he even framed it.

Want to win tickets to this year’s Nor Cal Cannabis Cup and congratulate DeAngelo yourself? High Times magazine was cool enough to give us 4 tickets to kick down.