Name: Banana Kush
Score: 8/10
From: Harborside Health Center
Type: Hybrid, Indy dominant
Genetics: Kush Hybrid
Price: $475/ounce
Appearance: Bright green with lots of sweet sparkly crystals and bright yellowish/orange hairs ala tabacco sunburst Les Pauls.
Smell: Has that unmistakable spice of kush with a hint of candy-like sweetness.
Flavor: It tastes just like smoking a dried banana peel if a dried banana peel tasted exactly like spicy kush with a hint of dried banana peel.
High: Banana Kush joints automatically make everything about 75% funnier…that’s almost enough to make Doug Benson seem funny.  It’s a mellow sorta introspective high that’ll give you that real nice all-over body stone.
Buzz Length: Depending on how quick your local pizza deliver dude is…you might be able to smoke a few bowls of this and still be stoned by the time you finish your first slice.
Medical Uses: Works really well for pain, both physical, say like the aches from a full day of surfing or like mental pain that accompanies sitting in a cubicle all fucking day long rotting like a corpse stapling stupid cover sheets to fucking TPS reports all fucking day like a damn sucka zombie. 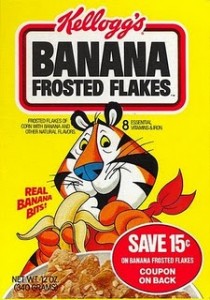 Remember when they came out with Banana Frosted Flakes? Well that shit sucked. What those fools shoulda came out with was Banana Kush instead…because that shit’s GRRREAT! It’s all kushy and banana-ish with this wonderful dankyness…all perfect for summer and nice weather and Sublime tunes and stuff. Banana Kush goes really well with bikinis and Red Stripe beer and ukuleles. And, remember that scene in Point Break where all that bonding took place over football and surfing and bonfires and hanging out at the beach and shit…Well, moments like that are when it’s a perfect time to fire up some Banana Kush. Also any other time during the day or night.

You can bet that Anthony Keidis and his dickhead bully surf punk mob weren’t all high on Banana Kush when they attacked poor Johnny Utah after he dropped in on that one dude, but we’re almost sure Gary Busey was though.