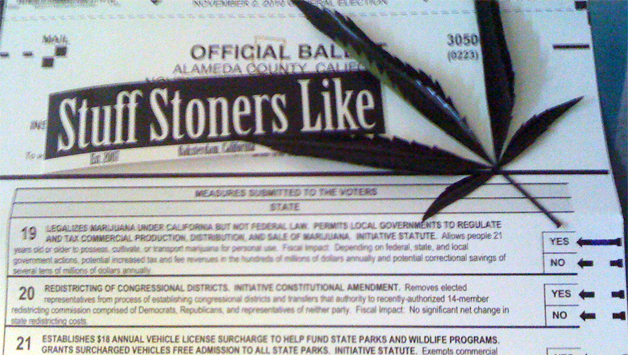 That’s right haters…not only do the MAKERS OF STUFF STONERS LIKE fully endorse Proposition 19, the ballot initiative in California that’ll legalize marijuana for ALL adults 21 and up on November 2, as permanent absentee voters here in Oakland…we already voted YES on that shit.

Here it is in BLACK AND GREEN:

Why did we vote yes? Well, to put it simply…we’re STONERS and voting AGAINST LEGALIZING WEED just seems like fuckin’ heresy, man. Do we even need to explain?

Eh, this wouldn’t be a very interesting post if we didn’t explain, right? Like everyone concerned with this historic vote, to many their first opportunity to vote to legalize weed in their lifetime, we’re worried about the commercialization of marijuana and the ultimate demise of the STONER CULTUre we adore.  Sure, the MAKERS OF STUFF STONERS LIKE are friends with marijuana moguls who stand to make even more money off weed when it’s legalized and we’re friends with gardeners who are frightened as hell that they’ll lose everything. But we had to draw a line in the sand, man.

And, we’ve studied every aspect of this vote. We’ve heard the positive and negative stories about how legalizing weed would end drug cartels  and we’ve heard they’d barely make a dent. We’ve heard all the economic arguments, legalizing herb will save CA’s budget woes…we’ve heard since the value of herb will go down…that tax revenue will be paltry. We’ve heard how legalizing weed would take the burden off police officers and save taxpayer’s money. We’ve heard that patients rights may be threatened, or not affected at all. Of course we’ve watched all the posturing by the DEA and all the EX DEA Admins, posturing from Eric Holder, the threats of enforcement or lawsuits if the people of California vote to legalize.

Of course, we’ve kept an eye on the polls too. One minute the YES vote is way up…the next it’s in decline. We’ve read all the infighting between the marijuana community who is for and against the measure even before STONERS Against Prop 19 became a headline all across the internet.

A lot of people say this law is flawed, from Denis Peron to a whole bunch of other people, but we’re ramblin’. We’ve heard the argument that it’s too soon to legalize weed, that if this one doesn’t pass…there’ll be one that’ll replace it. Whatever.

We’re not gonna lie to you and say this was a difficult decision when it wasn’t. We knew all along how we’d vote…even before it became a ballot measure. We voted YES, for one simple reason. We voted yes to legalize marijuana because we can’t come up with any valid reason why the fuck marijuana should be kept illegal! And, like the shot heard around the world from Lexington and Concord, STUFF STONERS LIKE want to be among the very first motherfuckers to fire that very first shot at ending MARIJUANA PROHIBITION!

BOOM! The WAR on MARIJUANA PROHIBITION has begun!