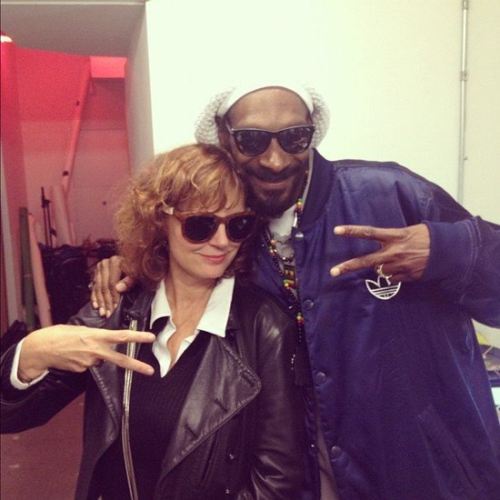 Susan Sarandon smokes lots of marijuana. During a game of “Buy and Eighth”…er uhm, we mean “Plead the Fifth” on “Watch What Happens Live” Wednesday host Andy Cohen asked one of the most outspoken, fiercely genuine, red headed actor’s on the planet, Susan Sarandon, “Name one major Hollywood event that you showed up to stoned.” She outted herself with the most stoner answer possible, “Only one?” She continued, “I would say almost all except the Oscars.” Maybe she was out or something? But, dude that adds up to a ton of time being out on the town while stoned, right?

In a HuffPost Live interview back in April she spoke out against prohibition, ‘it’s completely racist, you’re picking up everybody at the lower level because the mandatory drug laws let you trade in to get off,” she said. “People at the bottom are filling up our jails, mostly people of color…you’re wasting taxpayers money and allowing drug cartels to make money.”

Sarandon has never shied away from controversy. She’s spoken out about marijuana many times in the past, in fact the mother of three adult children gave some stellar advice to moms everywhere in 2010 when she told a British newspaper, The Observer, “I like stuff you can smoke. Everyone is wired differently. Some people can do stuff that others can’t. That’s what I told my kids. Some drugs can kill you. Some are not even worth trying. Some are a lot of fun, so talk to me first.”

Stoners everywhere should appreciate and applaud Sarandon for speaking out for us and helping to remove the cloak of ignorance that has surrounded marijuana since prohibition. Thanks Susan!