Name: Trainwreck
Score: 8/10
From: Berkeley Patients Group
Type: The Trainwreck strain is a well-known Sativa dominant hybrid…maybe up to 100% if you find the right stuff
Genetics: This is another one of those  famous marijuana strains that’s steeped in mythology. A lot of people up in Nor Cal will gut your ass if you don’t nod your head in agreement while they tell you it’s originally from Arcata, CA grown on a hillside near the site of some nasty summer-time train wreck back when Jerry, Jimi and Janis ruled the world in the 60’s. Some say it’s a product of two brothers from the 80s. And, a few think Tupac’s alive. But, really who gives a damn shit, right?
Price: $440/ounce or practically free if you grow it
Appearance: Strikingly beautiful like Kristen Schaal’s personality, with smallish nugs that look very sativa-like…akin to those rad 60’s Sativas from South America, which they kinda taste like, but absolutely coated in bright white li’l electric crystals. The buds are super dense and solid…like li’l green petrified popcorn.
Smell: Close your eyes and think back to the first time you ever smelled weed. Think Janis Joplin minus the vodka…no…better yet, close your eyes and imagine what Otto’s jacket would smell like. Yep, that’s exactly its intoxicating aroma.
Flavor: Absolutely fabulous. Trainwreck has a taste all its own, very very danky, very spicy, rich and complex.
High: Train’s got a very soaring high like a rocket ship that goes straight to the head and comes on fast and strong like a freight train.
Buzz Length: This shit grips on with white knuckles and won’t let go…like a psycho stalker ex-boryfriend who doesn’t take a hint and seemingly lasts forever like the fuckin’ rash he gave you.
Medical Uses: Great for depression, great for curing nausea, bringing on the munchies or turning an ugly chick cute. Wait…who said that? 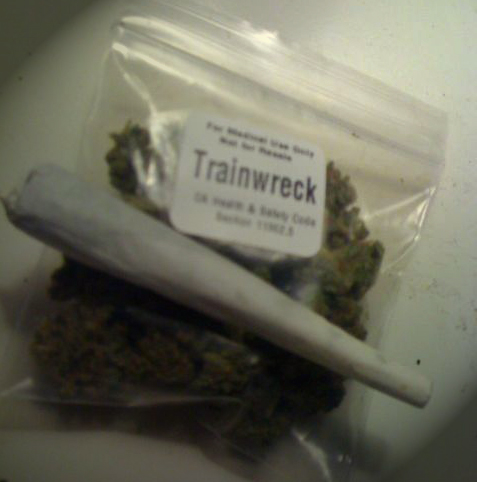 Trainwreck…like it’s thoughtful name implies…will rock you like a hurricane and instantly hit you hard like a George Foreman punch to the face and leave ya blissfully incapacitated in its wake of boredom-destroying bliss. If you wanna fuck up an entire Sunday by dragging your man to Ikea, here’s how you do it. Smoke him out with some of this shit…don’t say a thing…just start the car and he’ll be in the fucking pillow section before he even realizes he’s up off the couch. Train’s super fucking extremely potent and some pussies might even complain that “it’s too strong”. To those people we say…“grab your fucking Coldplay record and get the fuck out of our basement.”