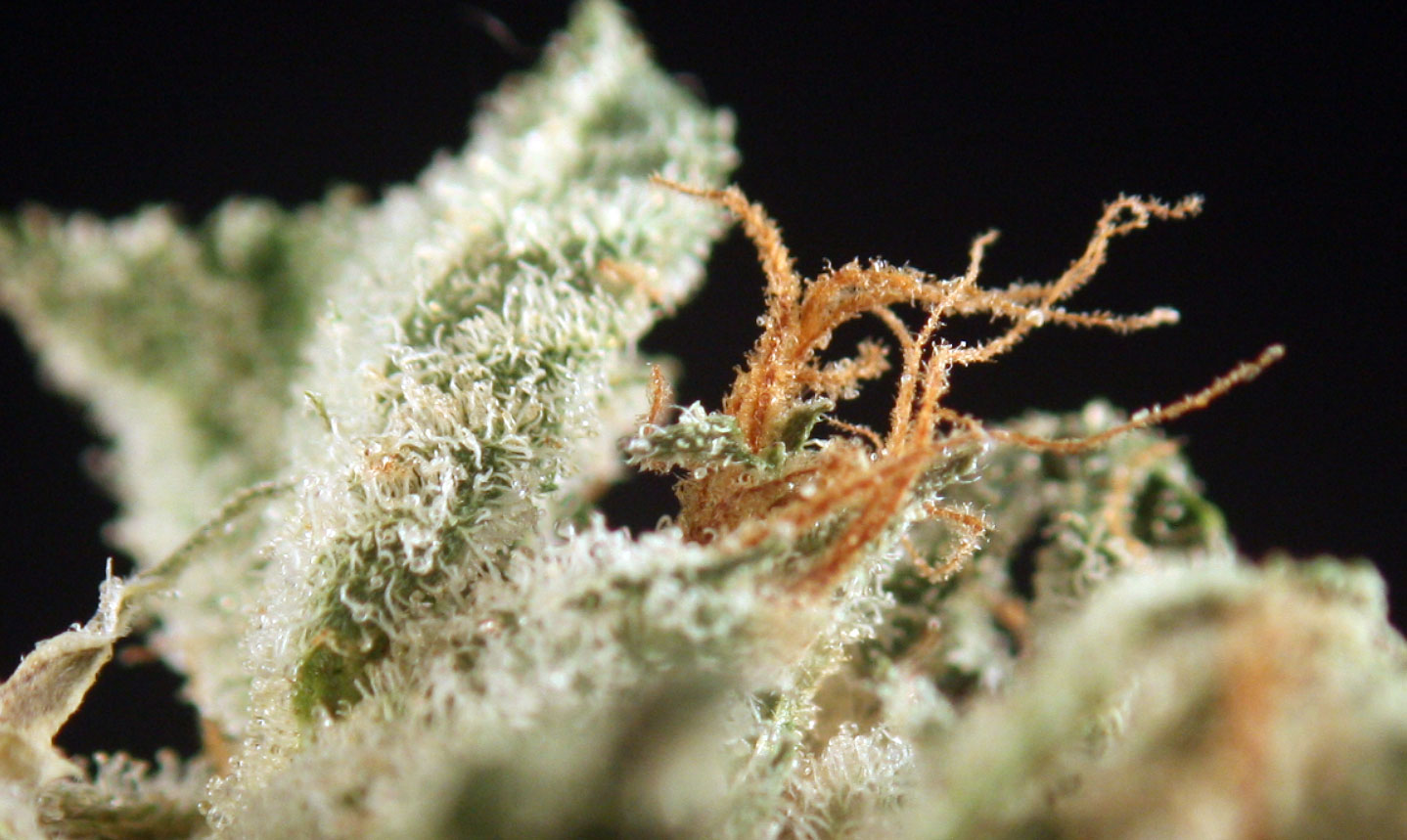 Trichomes are on the up and up, man. Sure everybody loves pot’s familiar green leaves and sticky buds. But it’s the nearly invisible trichomes measuring about about 50 to 100 micrometers wide that provide all the fun. It’s weed trichomes that deliver all the medical or recreational value of marijuana. That’s because trichomes contain many of pot’s most beneficial compounds—cannabinoids like THC and CBD.

Trichomes typically cover all parts of marijuana buds from the interior stems to the surrounding leaves. And it’is believed that these tiny trichomes evolved as the cannabis plant’s defense mechanism. The trichome protect pot from threats like insects and animals. The trichome makes the plant less palatable to hungry predators. Plus weed trichomes are also known to inhibit or ever prevent some types of fungal growth. Some scientist think that trichomes also protect pot plants from high wind and low humidity.

RELATED: Mouth Swab Drug Test —What Is It and How Do You Pass It?
RELATED: How To Pass a Urine Drug Test for Weed

The word trichome comes from the Greek word trikhōma which means “growth of hair.” Sounds about right since they resemble little hairs sprouting from the surface of the buds, fan leaves and stalk. Like we mentioned cannabis trichomes are really small—nearly microscopic. Up close they look like tiny mushroom because they’re comprised primarily of a stalk and a head. It’s within the head that he actual production of cannabinoids like THC occurs.

There are actually three types of trichomes: Bulbous, capitate-sessile, and capitate-stalked. The Bulbous trichome is the smallest of the bunch. It’s barely visible to the naked eye. The capitate-stalked trichome is the biggest. It’s what most people notice when looking at cannabis flowers—either with the naked eye or under magnification. While more research is necessary to determine their differences scientists think these weed trichomes manufacture all types of cannabinoids and terpenes—the stuff that makes dabs taste so great.

Scientists used to think that THC and other cannabinoids were made in the green plant tissue and transported to the trichomes during flowering. Now that marjuana is more legal than ever making research possible. New studies reveal that the cannabis trichomes themselves actually make the cannabinoids and terpenes. These essential oils which include THC mainly accumulate on the outer layer of the gland head. They’re also found on the outer layer of the epidermal cells that cover the entire bract or any trichome-dense area.

Keep in mind that trichome coverage isn’t an indication of a pot plant’s potency.  While buds covered in a bounty of resin glands is  a good sign—it doesn’t necessarily mean that those weed trichomes contain a high percentage of THC, CBD, or other effective cannabinoids and terpenes.

Trichomes also indicate the state of maturity of female cannabis plant—especially during the final stages of growth. When the trichomes are clear the plants are not yet fully mature. When growers wait until the trichome stalks appear cloudy or milky their cannabinoid profile will typically deliver a more heady, energetic, sativa-like high. If allowed to ripen longer the trichomes will become a deeper amber color and deliver a more relaxed body stone typically associated with Indica strains. Most experienced growers don’t rely on the color of trichomes to determine doneness. We got a great post you should read if you’re looking for information about How to Tell If Your Marijuana is Ready for Harvest. But because some strains produce trichomes that never become amber in color it’s better to not rely too much upon the appearance of trichomes to determine their harvest schedule and get familiar with a particular plant’s particular characteristics..

Cannabis trichomes can be collected and combine into a concentrate. They’re the core material of products like kief and hash. They’re also the basis for extractions like bubble hash, wax, BHO, shatter, budder or any cannabis concentrate you can imagine. We’ve got a great post called, What’s the Difference Between Shatter, Wax, Crumble, BHO and CO2, if you want to learn more about these resin processing techniques and why stoners and medical patients alike love ‘em.

It seems like trichomes, the near invisible hero of the cannabis plant, are finally getting their day in the sun. In fact extracts are beginning to outsell marijuana flowers in some dispensaries. And if you’ve gone to a Cannabis Cup lately you’ll notice that they’re populated primarily with extract vendors of some sort. However, no matter their popularity cannabis flowers are essential in their production. The trichome may be getting all the attention lately, but flowers will always be necessary to make ’em.

Have something to say about trichomes weed or stuff stoners like? Let us know in the comments below, yo…