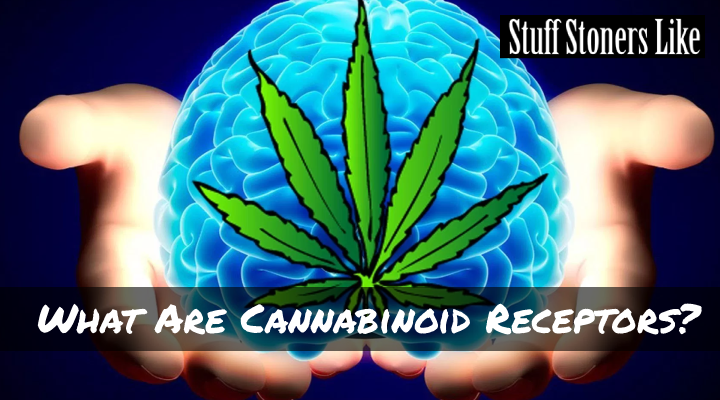 What are cannabinoid receptors?

Cannabinoid receptors? What in the hell are those and why do we have them are just a couple of the cannabis-related questions our write Mat Lee hears all the time. “They are all part of the wonderful world of cannabis science, filed under the Marijuana’s effects on the brain section, which just so happens to be one of my favorites,” he tells us. “So I’m glad you all asked.”

Marijuana’s effect on the brain

How does marijuana affect the brain? Well cannabinoids get inside your brain and cause changes in the way certain neurotransmitters are released. They do this by binding with different cannabinoid receptors inside the brain. I know, that’s all very confusing and a lot of it is still super new cannabis science. So you can expect that as legalization continues more scientists will be able to study the canabinoid and marijuana’s effect on the brain.

In order to understand what a cannabinoid receptor is, we must first understand cannabinoids. Chemical compounds like THC and CBD, and all the other cannabinoids our endocannabinoid system knows and loves, are like a little signaling system. A network if you please.

What is the endocannabinoid system?

For a better understanding of all this, I asked my friend who worked in the lab with me, Greg Jarvis. This is one smart cookie. He studied chemistry and researched cancer and inflammation at Purdue. Plus he’s articulate AF. Want proof? I asked him about cannabinoids, receptors and exactly what does weed do to your brain? And you can see his brilliance in his beautifully crafted response about cannabinoid receptors and why we have them.

Greg says, “Humans have evolved to express cell-surface receptors both in the brain and in the peripheral nervous system that selectively bind a specific class of small organic molecules called cannabinoids. These molecules can come from ingestion of cannabinoid-containing plants (cannabis) or they can be synthesized endogenously by the human brain. Endogenous cannabinoids, a.k.a. endocannabinoids and their complementary receptors, aptly named CB1 and CB2, have been classified as the endocannabinoid system or “ECS”. The ECS plays a role in a variety of different systems in the human body, ranging from pain response to mood modulation to satiety, to name a few. Depending on the situation, your brain will produce more or less of certain endocannabinoids to influence these systems through receptor-ligand interactions.”

“For example, through the expression of CB2 receptors on the surface of immune cells, endocannabinoids can influence the morphology of these cells and send them into a state of “anti-inflammation” to help combat situations of excessive immune response.”

How does marijuana affect the brain

Now that we have a basic understanding of what cannabinoids are, and what the cannabinoid receptors do when they get THC or CBD or any other cannabinoid to bind to them, let’s get into the effect of the cause. Depending on which receptor a particular cannabinoid has an affinity for, and as far as I understand it, the location on the receptor protein it binds to, you’ll get a different response from the different neurotransmitters. This is monstrously important, as it has a direct physiological link to other systems in the body.

It seems like having a well primed, and fully functioning endocannabinoid system goes hand in hand with a more efficiently functioning immune system, and therefore happier, healthier humans.

So why do we have these cannabanoids? I think a large part of it is exactly as I just said, to help certain parts of our insides work a little better. Our endocannabinoid system has been evolving inside of us, and we have been evolving alongside this amazing plant ever since human beings started being.

The cool thing is, it’s not just us. Most, if not all mammals, birds, fish, and even reptiles have an endocannabinoid system inside their gut holes. It’s like nature’s regulator, and the more cannabinoids we keep inside our brain to trigger the receptors that keep our body functioning on a more balanced level day to day, the more positive our experience of this plane of existence becomes. Hand in hand. It’s a beautiful thing.

As of right now, we know of two different cannabinoid receptor types. CB1 and CB2. According to the research, the CB1 receptor is found primarily in the brain, but the CB1 receptor has also been found in our reproductive systems and in our anterior eye and retina.
The CB2 receptor is mostly found in the immune system. A majority of these cannibinoid receptors are found inside of our very own spleens! It also sounds like these cannibinoids receptors are responsible for all of those amazing anti-inflammatory properties we all enjoy from our cannabis.
RELATED: CBD vs THC What are the Differences?
RELATED: What is CBD Oil?

No Endocannabinoid. No Ono.

Picture your car without any oil in it. Try driving that car for any amount of distance. Not a very happy car is it? Now picture my guts. Picture me, and how non tolerant of day to day nonsense I become when my endocannabinoid system isn’t fully primed. Yeah, that’s not a world I want to live in.

Now put some oil in that car. Assuming there wasn’t any permanent damage done from all the dry riding it endured, things should start working at an optimal level once the insides are properly lubricated again.

Put some oil in me, and the same thing happens. The rain clouds part, my appetite and immune system are functioning on a more efficient level, and everything just seems ok. The experience of the journey becomes something to enjoy and revel in, rather than the dull repetitive, monotonous trudge to the grave we all subconsciously know it is. You want me to end on a high note?

Take a bong hit. Now take a dab. Now read this—the cannibinoid, cannabinoid receptors and the endocannabinoid system are all stuff stoners like.

What does weed do to your brain? Let us know in the comments section below.