The ex-High Times editor talks about rekindling the spirit of cannabis with his new 4/20 event, founding the legendary Cannabis Cup plus the ups and downs with High Times mag and his take on the future of pot…

Former High Times editor and inventor of the world-famous Cannabis Cup, Steve Hager, will be hosting the 1st Annual 420 Eve on April 19 at a gorgeous private home in San Rafael. In fact it’s being held in what’s called the Grate Room at Terrapin Crossroads. The Grateful Dead’s Phil Lesh designed the space to be the “Holy Grail of Live Music.” So fitting because no only will there be a lavish banquet, open bar, a concert and an awards show—judging the greatest cannabis strains in the Bay Area—the theme of the party is cannabis as the holy grail. Speaking of that Steve will also premiere the highlight reel of his upcoming documentary – “Treasure of the Holy Grail” – during a press conference that day. The film will reveal the true story of how and where cannabis and religion first met. And of course what that has to do with the Holy Grail.

Check out the history of 420 video below for an invite to the party and more information. Most of the seats will be filled with pot stars, performers and media, we’ll be there, but a limited number of tickets are available.

We were lucky enough to chat with Steve about the current state of cannabis, it’s future and his upcoming 4/20 Eve event. It went a little something like this… 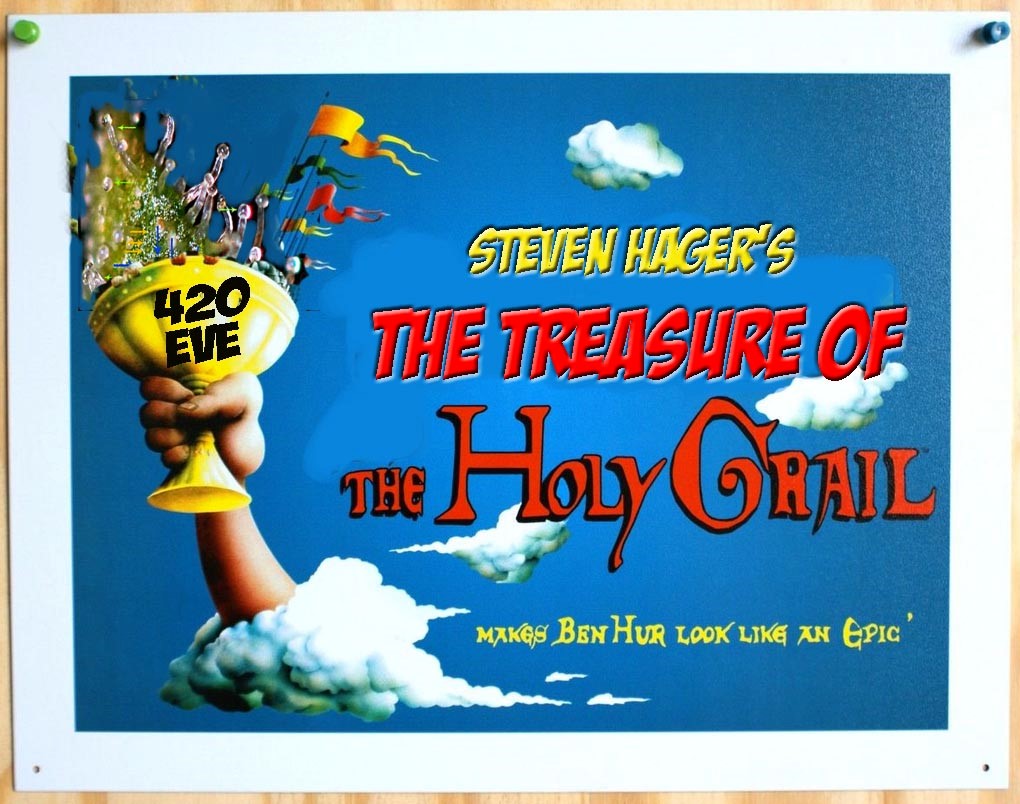 Q: How long did ya work at High Times and why in the world did you leave?

Steve Hager: I came in to help them out around 1985 and put together an issue with ZZ Top on the cover. It turned out to be their best selling issue of the year so they wanted me back full time. High Times wasn’t doing very good at the time. They had been through several changes in identity and basically hit the skids and was milking the gutter of the drug culture. I told them to stop with the strippers and hard drugs and just celebrate cannabis and teach people to grow their own to avoid the criminal element and sleaze that goes with it. But seven years ago, when HT went corporate, they put me out to pasture. And eventually fired me three years ago.

Q: How did you conceive of the cannabis cup?  Was it patterned after other events?

Steve Hager: I staged my first event while a junior in High School, when I was publishing the biggest underground newspaper in downstate Illinois, The Tin Whistle. So events were not new to me. But after I visited Nevil in Holland and realized we could set a standard for cannabis quality while providing and outlet for seed distribution seemed like a no-brainer to me. Plus Dave Watson told me about the California harvest festivals before CAMP started.

Q: What was the best thing that ever happened at one?

Steve Hager: Every Cup was magical. We did the ceremonies improvisationally. Whatever worked and felt good we kept as part of future ceremonies. Different counterculture icons, male and female, were high priest and priestess and they brought their energy and vision. We learned from them all. There was no “best” because they were all the best in their own way—from John Trudell, to Steve Gaskin, to Barry Adams, to Paul Krassner, to Robert Anton Wilson, to the Brotherhood of Eternal Love and Rainbow Family elders.

Q: How do you feel about the current state of the cup in Amsterdam?

Steve Hager: There is none. Cannabis has been going downhill in Holland since feminized seeds began.

Q: How about the proliferation of High Times cups in America?

Steve Hager: My cups were spiritual events. Sadly, that element is lacking in things cannabis these days. Everyone is rushing for the gold and has their Bogart meltdowns. That’s why I call the new event, “Treasure of the Holy Grail.” (After Treasure of the Sierra Madre) It will be interesting to see who survives and who becomes the Steve Jobs of cannabis. Cannabis tends to amplify ego. So I am sure there will be many contenders for that position.

Q: How about the proliferation of cannabis events in general?

Steve Hager: It comes with legalization. But you can see a divide between hippie culture and corporate culture. And that’s the way both camps want to keep it.

Q: What separates this new event from the mainstream awards?

Steve Hager: We are bringing back the original vibe of the Cup and the original crew is part of the event. It’s not a money grab milking profits, but a real ritual celebrating the uncelebrated heroes of the counterculture (this year, The Waldos) while searching for this year’s greatest strain because hot strains do change as the clones wear out.

Q: Tell us about what you’ve been up to since high times? Do you live in the Bay Area?

Steve Hager: I live in New York City. I did events in Colorado after leaving High Times, but now I want to move operations to the Bay Area because I believe California is where the best pot in the world can be found. I spent three years raiding my print archives and turning them into books. I have six that are paperbacks and another 20 are ebooks, most of which are free to download. Most of my readers come via iTunes bookstore, but I am also easy to find on Amazon and Smashwords.

Q: What’s up with this new documentary?

Steve Hager: I’ve been a working journalist for over 50 years now and became a video journalist 30 years ago. I have assembled an amazing archive and I plan to place it with a major university in a few years. But first I want to ransack and cherry pick the best stuff to make a documentary series that spans the 1960s to today.

Q: Tell us about the connection you see between cannabis and religion?

Steve Hager: Well, religion is a bad word, but in truth almost all major religions evolved from cannabis cults. Spirituality comes in many flavors, but the flavor that dominates cannabis is peace, non-violence and empathy with everything. Cannabis helps you feel some of those connections. I believe stoners domesticated cats, sheep, dogs, birds and horses, as well as many plants. In our own timeframe, stoners invented the personal computer and rule the world of hacking.

Q: What’s your favorite way to get high?

Steve Hager: I never wanted anything more than an occasional puff off a flower. Bongs were overload, much less dabs. I encourage regular recreational users to fast for a week or two at least once a year to reset your intake. Also, the most important thing I learned is the less you do, the higher you get. So, unless there’s a medical need involved, it pays to moderate your lifestyle, especially early in life. I only have one rule, though, don’t hurt anybody, especially yourself.

Do you plan on attending any 4/20 events this year? How ’bout this one? Let us know in the comments below…