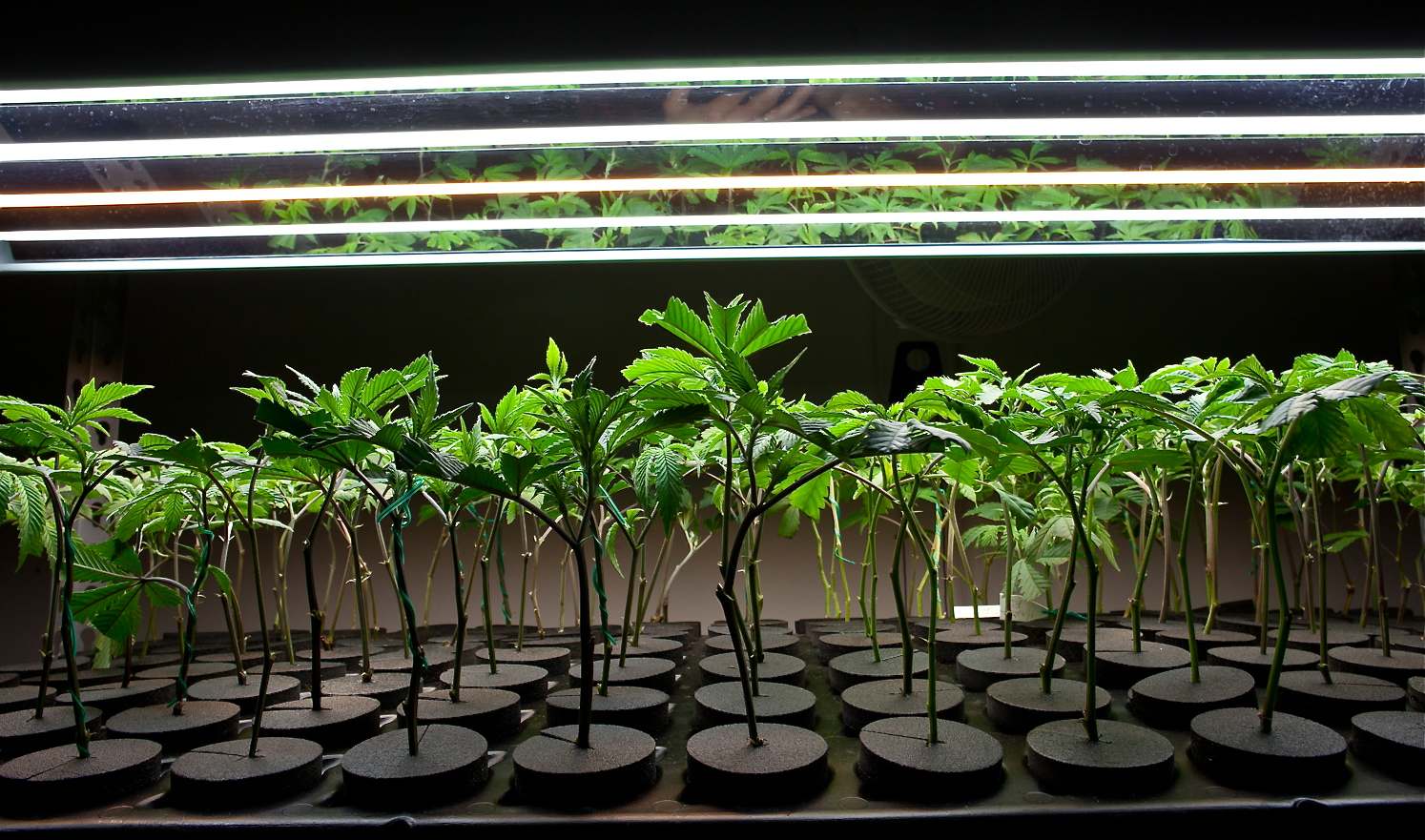 Cloning cannabis is easy. Want to learn the best practices to cloning plants plants? Cool. Our buds from UpTownGrowLabs put together this great vid and some content on how to make yourself some marijuana clones. So sit back and enjoy our feature presentation: Cloning Cannabis 101 how to clone marijuana for fun and pleasure.

How to clone weed

We are using a  Vision Seeds’ Chocoloco as the mother plant for our cannabis clones but obviously you can use any marijuana strain you have.
Choose a branch from the bottom of the plant to use as a marijuana clone. According to master marijuana grower Jorge Cervantes, in his book Marijuana Horticulture, these branches have more of the rooting hormones needed. Additionally when you’re cloning marijuana plants always have a cup of clean water nearby. One you take a cutting you can drop those future weed clones in some water to keep them fresh prior to making the final cuts.

Using a razor blade or scalpel remove the marijuana clone from the mother with a 45 degree cut. Don’t use scissors as you will crush the stem when you cut it. The reason for the angled cut is to give the marijuana clone’s stem more surface area from which to drink and grow roots. Immediately after cutting, put your weed clones into water to prevent air bubbles from forming in the stem (an embolism). Air in the stem can prevent water uptake and result in a dead weed clones.

RELATED: Mouth Swab Drug Test —What Is It and How Do You Pass It?
RELATED: How To Pass a Urine Drug Test for Weed

Once  you’ve cut the marijuana clones take off the lower leaves and give her another 45 degree cut higher up the stem. Again, have a cup of water nearby to place the fresh cut marijuana clone into. You will also want to clip the fan leaves in half so that the cannabis clones still have enough leaf area to aid photosynthesis but not too much  to make the clones work to provide moisture to large fan leafs. The trimmed fan leaf also makes it easier for the cannabis clone to process water from her roots in turn reducing transpiration. Trimming the fans leaves on cannabis clones also keeps their leaves from touching each other.

After her final 45 degree cut dip her in water or your cloning solution or gel—there are many to choose from. Next place your cannabis clones and into your cloner, hydroton, rockwool or other medium.

If you’re cloning cannabis in soil you can just drop that rooted cutting right into some potting soil. Make sure that the soil doesn’t have a ton of nutrients. The dudes at Stuff Stoners Like prefer FoxFarm Happy Frog Potting Soil

. They tell us that they also like to drop in a little bit of Xtreme Gardening Mykos

pure mychorrhizal inoculation to supercharge root production. Sometimes they even make a special nutrient tea just for using with marijuana clones. For more information on cloning cannabis in soil check out our post: Transplanting A Marijuana Plant. There you’ll discover a lot of great tips on how to transplant your rooted clone into bigger containers for rapid growth.

for cloning weed. What’s great about using an autocloner for cloning cannabis is that the bottoms of the clones are constantly misted with water you can just set it and forget it. Unlike using rockwool and a humidity dome for cloning plants you don’t have to baby sit them, constantly misting them with water. Just take some cannabis clones, stick them in the autocloner and walk away. Just walk away. Come back a couple weeks later and you’ve got a fully rooted and fully happy little weed clone. Plus by using an autocloner you reduce the risk of mold and mildew for on your newly cut cannabis clones as well. They come in an array of sizes, from making 64, to 128 marijuana clones at once. Or as little as 16. Oh and we usually just use plain tap water with no rooting hormones or gels inside the autocloner.

Make a wishbone cut by Splitting the clone’s stem. This will help your weed clones produce roots faster. Here how you do it. After you’ve taken the second 45 degree cut carefully slice vertically through the bottom making a quarter to a half inch incision so that the stem resembles a wishbone. Doing this to your cannabis clones exposes more of the layer just under the plant’s skin called the cambrium. As a result you will see 20-40 percent more root growth due to the extra surface area on the cambrium where the roots originate in a marijuana clone.

The two rooted clones in the video were taken three weeks apart. The wishbone clone is three weeks younger than the straight cut and has almost twice as much root mass on her.