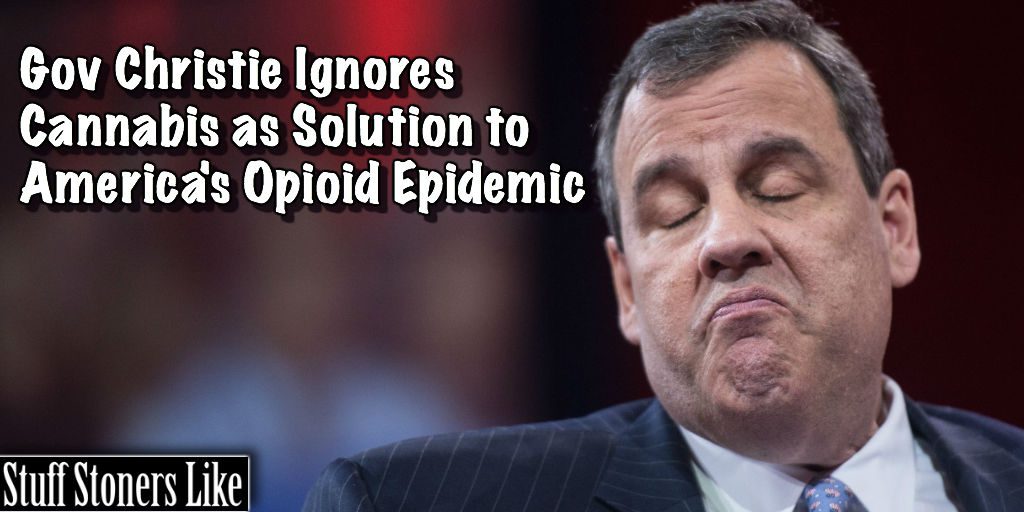 Despite evidence showing marijuana is an all-natural alternative to opioids Gov Christie drafts plans to address opioid epidemic without mentioning pot. Our least-favorite, weed-hating politician drafted plans on how to address the opioid epidemic on Monday. And, guess what? The word marijuana wasn’t anywhere to be found in the ten page detailed document. Not one word that even remotely indicated a correlation between pain management and marijuana.

We are facing a crisis of such epic proportion that a commission is begging the President to take action and declare a federal state of emergency. Yet not one word about how marijuana is known to solve the problem. Are we surprised by this lack of attention for the herb? Obviously, not surprised, but really pissed off nevertheless. How is the Christie Commission going to combat the opioid addiction and all the destruction that falls in its path if they don’t acknowledge the obvious solution—marijuana? Weed is a natural pain killer that you can grow in your backyard—one that has resulted in not a single death. While opioid-filled pharmaceuticals kill people all day long. However Christie refuses to believe that marijuana is medicine.

The commission received, reviewed and ignored nearly 8,000 comments from members of the public. And, supposedly, the Commission worked really hard, reaching out to all the pertinent players involved in combating the crisis. The report states in its plea to the President, “In addition to conducting phone calls with Governors and their teams in all 50 states, we also held a listening session with bi-partisan members of Congress, and key cabinet members of your Administration. Individual Commission members have organized “listening sessions” and solicited recommendations from treatment providers, addiction psychiatrists and other physicians, data analysts, professional medical and treatment societies, medical educators, healthcare organizations, pharmacoepidemiologists, and insurance providers. Outreach also has been made to scientists with broad expertise in pain, addiction biology and treatment.”

But, not one person from any of these disciplines mentioned the word marijuana? Seriously? Christie stands behind the federal regulations and marijuana is considered a class 1 drug along with heroin. But, how can he and his Commission be taken seriously if they deny the research and data on the medicinal value of marijuana?

Ironically, one of Christie’s fellow Republicans, Senator Steve Daines, has a bill in the Senate right now which contains a provision allowing veterans to access medical marijuana through Veteran’s Affairs in states where it is legal. The VA is fighting for its veterans rights to medical marijuana but the Chris Christie Commission didn’t use the word marijuana once in their report on how to combat opioid addiction.

Did Christie and his Commission not bother to interview or review the VA’s stance on marijuana? Did he miss the American Legion’s recent letter to the White House in April, requesting a meeting with President Trump to discuss, among other veterans’ issues, the reclassification of marijuana?  “It’s time the federal government took action to remove barriers to scientific research on this very important subject,” Joe Plenzler, the Legion’s director of media relations said.

Pretty sure Christie’s Commission must of also missed a recent paper published by the Journal of the American Medicine Association. In 2014, a group of researchers completed a time-series analysis of medical cannabis laws and opioid-related deaths across all 50 US states over a 12 year period. The paper concluded, “medical cannabis laws are associated with significantly lower state-level opioid overdose mortality rates”.

Somehow the Commission must of failed to reach out to New Mexico when ”conducting phone calls with Governors and their teams in all 50 states.” Because if they consulted New Mexico they would have known in 2016 researchers who began prescribing medical cannabis to opioid-dependent patients said that “[the patients] state [that cannabis] calms down their cravings, relaxes their … anxiety and is helping to keep them off opioids. If they are in pain, cannabis is helping relieve their pain, often to the point that they don’t need opiates anymore”.

Chris Christie should spend less time at the beach and baseball field and do a simple search on Google for the words marijuana and opioids. Might be a little more productive and could change the course of his downward, death spiral of a career.