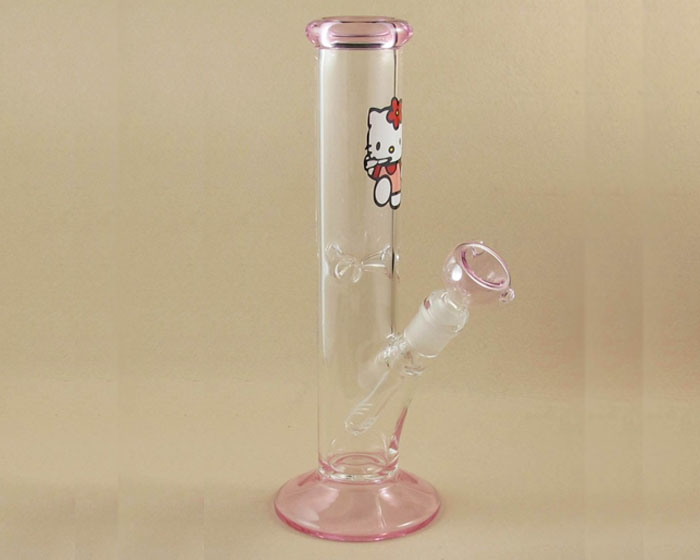 We’ll pick a random winner at 4:20 pm West Coast time on Sunday Aug 16. And our buds at AliBongo will send out your Hello Kitty bong.

About the Hello Kitty Bong
We’ve never seen a Hello Kitty Bong in real life, however we know our bud CoralReefer420 has one. It’s not totally like the one we’re giving away, but it’s close. The one we’re kicking down features 5mm glass, a high quality ice catcher and an 18.8mm diffuser drop pipe to cool down the smoke. It’s 295mm tall, has a neck with of 60mm and a has a baby pink tinge to the glass and the kitty logo.

Hello Kitty is not a cat or is she?
We don’t know much about Hello Kitty. But we do know is that she’s been featured on everything from bowling balls, to motor oil, to shitty guitars and sanitary napkins. But we do know she’s a cat. It doesn’t matter how much pot you’ve smoked—it’s pretty damn obvious, right? But for a moment all hell broke loose earlier this year when the LA Times reported she wasn’t a cat.

Apparently some Hello Kitty trend expert/anthropologist who has spoken with Sanrio—the people who make Hello Kity shit—says she was told sternly not to confuse Hello Kitty with a cat. According to the LA Times a woman named Christine Yano was prepping a script for some show at some Hello Kitty Con thing and she got reprimanded.

“I was corrected — very firmly,” she told the LA Times. “That’s one correction Sanrio made for my script for the show. Hello Kitty is not a cat. She’s a cartoon character. She is a little girl. She is a friend. But she is not a cat. She’s never depicted on all fours. She walks and sits like a two-legged creature. She does have a pet cat of her own, however, and it’s called Charmmy Kitty.”

Wait Hello Kitty has has a pet cat? That’s crazy. Know what else is crazy? Hello Kitty’s name isn’t Hello Kitty. It’s actually Kitty White — a Scorpio who loves apple pie, and is the daughter of George and Mary White. And according to Yano  “She has a twin sister. She’s a perpetual third-grader. She lives outside of London. I could go on. A lot of people don’t know the story and a lot don’t care.”

How Many Grams In An Ounce of Weed?
Craigslist Denver Is NOT A Legal Marijuana Marketplace
Here’s How to Pass A Drug Test

If you do care. The Huffpost got to the bottom of this whole Hello Kitty Isn’t a Cat Thing. They reported that some rep from Sanrio got in touch with some reporter for RocketNews24, a said a representative for Sanrio said, “We never said she was a human.” it appears they meant she wasn’t a cat in the context of what it means to be a cat in our reality, not the cartoon universe Sanrio has created. From Huffpost:

The specific word that the Sanrio spokesperson used to describe Hello Kitty was “gijinka” (擬人化), which means “anthropomorphization” or “personification.”