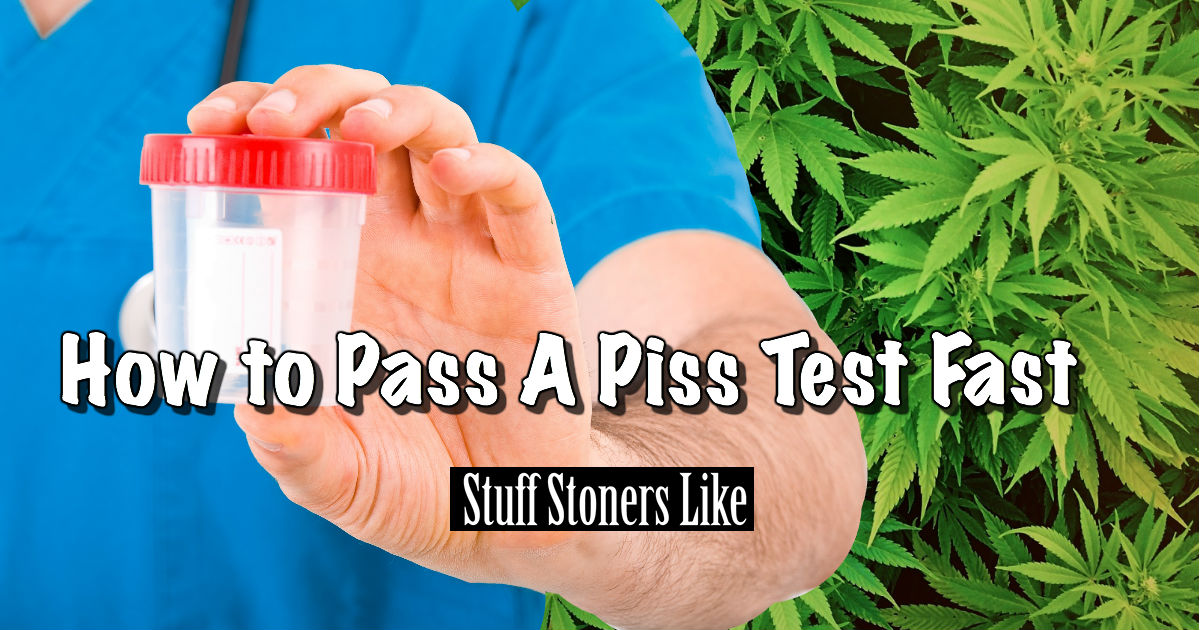 Want to know how to pass a piss test ? That’s probably because you’ve found your dream job and it requires you to pass a drug test before you can start, right? Now we’re not advocating breaking laws or anything. But we definitely want to point out that drug testing is not only causing unemployment problems for people who are perfectly capable of doing great jobs, check out what’s happening in Canada with their truckers, it’s also causing hardships for employers.

Because it’s cheap, the piss test is the most commonly administered drug test in America. But it doesn’t show impairment. All it shows is that someone smoked weed at some point within the last month or so. To use it as a job screen makes no sense? Unless that screen is to weed out weed users.

What they’re looking for
Let’s begin by explaining what these tests are looking for. Drug tests including the urine test look for weed first and foremost. They also look for amphetamines, were talking meth, ecstasy, mda, etc. They check for cocaine and opiate use too. This includes drugs like heroin, morphine, opium, codeine. These tests also look for phencyclidine aka PCP.

What sucks is that out of all the substances we listed above, marijuana will stay in your system the longest amount of time. If you’re a heavy smoker you can expect marijuana to stick in your fat cells for a month or more. We’ve even heard of people who have had to wait more than three months before marijuana completely left their system naturally. So for those serious stoners that need to know how to pass a piss test we recommend substituting your tainted pee.

Of course there are ways to speed up the marijuana detox process. We’ll talk about this more as we get into how to pass a urine test. But the point is that weed stays in your system for such a long time that testing for it to show impairment is futile. So not hiring someone because they test positive for weed at some point within the last few weeks is completely discriminatory and plain wrong. Employers aren’t screening for alcoholics. So why are they screening for stoners—especially since marijuana is 114% safer than alcohol.

If you’re a regular smoker well then you could just assume you’ve got a lot of pot stored up in your body. You might want to score a home drug test kit to test yourself after you’ve followed the steps below. Why? Well there’s nothing like walking into the drug test facility with the confidence of knowing that you’ll pass. Confidence is key to passing any test—even drug tests.

Two options
Okay so you’ve basically got two options to pass a piss test quickly. They are smuggling clean pee or using a marijuana detox. Since we mentioned detoxing above and the fact that marijuana sticks around for seemingly ever let’s start there.

Pop a pill
There are products—detox pills and drinks— that work in a matter of minutes or take a few days to kick in. It basically comes down to whether or not you like popping pills or drinking drinks. Either way they’re both equally as effective. The best detox pills for THC that we’ve encountered are from Green Gone. According to them they’ll help you pass a marijuana drug test naturally and were not only designed by pharmacists, but actually recommended by them too. They will temporarily clean out your system or at least make it appear to the drug test lab that your system is clean.

These pills are a good idea to keep on hand if you might be subject to a random drug test. Keep one in your desk, purse, pocket, stash box, wherever. Pop that pill and you’ll be good to go.

Down a drink
Some people hate to pop pills. Here’s how to pass a piss test without ‘em—go with a detox drink. There are several detox drinks on the market. They all basically work in the same way—temporarily flush your system of marijuana metabolites or make it appear as such to the test lab. They work in a matter of minutes some have longer activation times than others so make sure to read and follow the directions carefully. Again we should stress this one more time make sure to read and follow directions. One of the main reasons people fail their drug test is because they didn’t follow the directions of what they were using to help them pass. So don’t be that person. 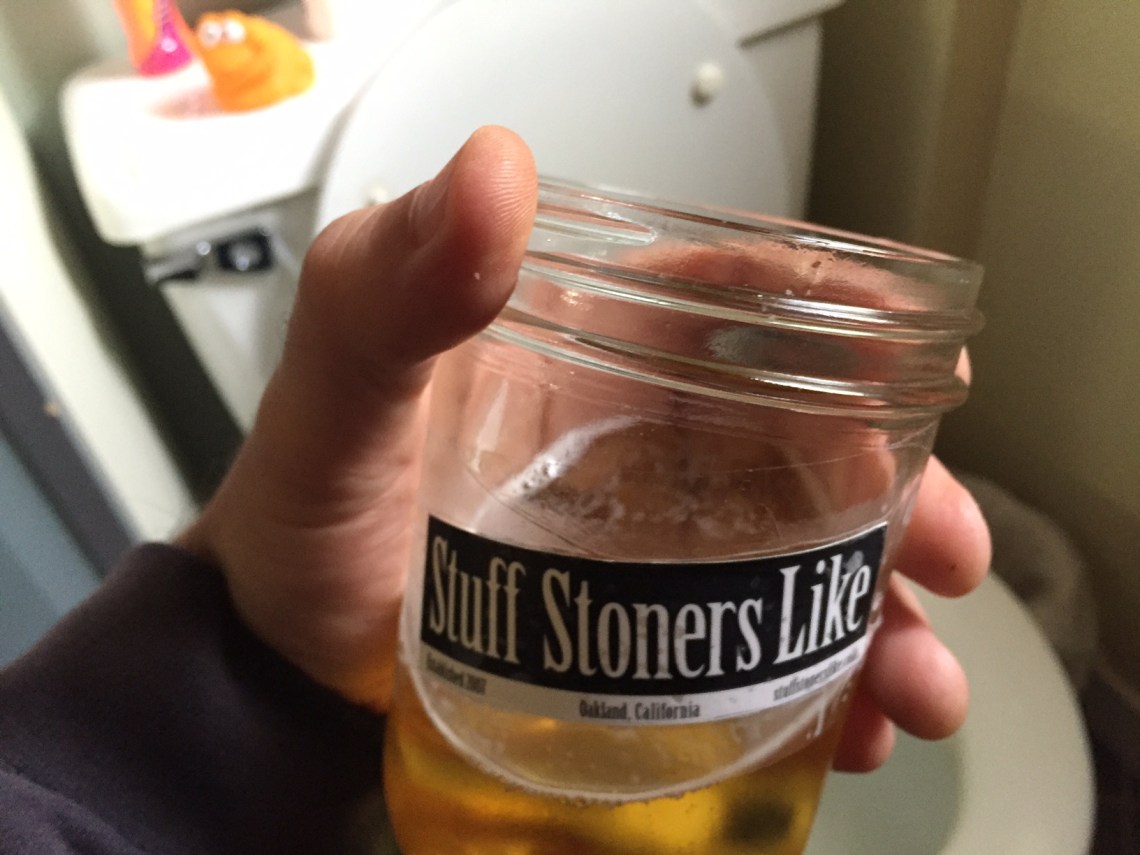 Smuggle clean pee
When it comes to passing a piss test synthetic urine could help.  Fake pee is the stuff that laboratories use to calibrate their equipment. You didn’t think they actually used their own piss to test the accuracy of these machines did you? As long as you use a quality fake urine you’ll be good.

Make sure that the artificial urine you use contains uric acid and always make sure to hand over a warm sample. That’s one of the biggest mistakes people make when it comes to using fake pee—it’s too cold. So always make sure that your urine sample is around 97 to 99 degrees before you hand it over. You can keep your sample warm by using a heating pad.

Or pour it into a condom and store it in your underwear. Be careful not to break it. You might want to practice walking around with the thing in your drawers. Trying using it in a bathroom and pouring it into a party cup or something for practice. Practice makes perfect, man. This is a test you don’t want to fail.

If you choose to use fake pee don’t forget to actually urinate in the toilet. The test takers are going to look to see if you did so don’t disappoint them. Don’t worry they’re not going to test the urine in the toilet. That would be gross and illegal. They can only use the sample you’ve given them. Also don’t leave behind any empty vials or bottles that you used to carry your piss. Don’t leave behind any heating pads or temperature strips or any other obvious signs of cheating.

Also be aware that there will most likely be someone standing outside the door listening. So as you take your piss test be sure not to drop any test tubes or scissors or anything that would sound suspicious. Don’t give them a reason to think that you cheated and they won’t think that you cheated.