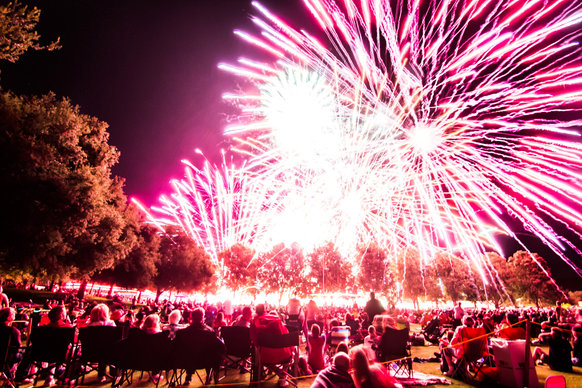 I know it’s been awhile since we’ve had a MDtW column, but if you haven’t noticed my author page lately, I’ve been a little busy writing about weed and cool shit to smoke it out of. But it is that time of year, when the days are hot and so are the nights. Unless you’re a dog or someone who suffers from PTSD, the fourth of July is an exciting time for celebrating our nation’s independence.

How do we do that? This is Murrrica. This is the fourth of July! Our one day a year where we can all legally get drunk and with the government’s blessing, blow some shit up. Unless of course you live where the fire danger was outrageous this year (sorry Montana!) Also, according to statistic brain, we eat a shitload of hot dogs. Approximately 150,000,000 of them. I’m sure there’s a MDtW in there somewhere. That’s so many hot dogs. Can you even begin to imagine all those lips and assholes?

I have fond memories of watching Saturn missiles get maliciously tipped over by the dastardly red hand of the wind, inadvertently aiming a barrage of them at my father’s head, one of which got caught up in his long stoner hair, and entangled itself until the pop. We’re not sure if it was the screaming they do or the pop that messed up his hearing. I’m guessing a little bit of both. I can remember another incident involving a bottle rocket and my best friends ass. To this day there is a burn hole in the passenger seat of my neon and a matching scar on his ass. Remember kids, you shouldn’t shoot bottle rockets out the window of a moving car, because you never know when it will miraculously find it’s way back into the window, and under your friends ass, where it will then proceed to scorch and pop. I’m honestly not sure how I survived almost dying from laughter that day.

Ok, enough of the reminiscing already, let’s get to the meat of the matter. Marijuana has killed zero, fireworks kills about four each year, with that number doubling to eight in 2013, according to these numbers from the CPSC report. Weird right? Marijuana has zero deaths, and stays at that number, even though millions of people use it, and use it a LOT. What else can you say that about? What else do that many people put into their bodies with ZERO deaths? Water? Nope. Air? Nope. Fire? Nope… Earth? Ok, now I’m just being silly.

But seriously, in some states we’re still hearing that weed has no medical benefit. Every bit of federally owned land prohibits the use of cannabis on it, our state parks included. Even in states where weed has been re-legalized like Washington. If you want to go to Mount Rainier and smoke a little weed, you can’t. Well, you can, but you can still risk getting in some trouble in the form of paying them lots of money or even possibly doing some jail time. All because federally it’s still a schedule one, which states there is no medical use and a high potential for abuse. Both of which are completely false.

Just to cite some references, here’s some quick stats from the National Fire Protection Association page on fireworks. Fireworks are a whole other sort of beast. They only kill once in a while, but let’s take a closer look at the numbers on the CPSC report here from 2013. How many thousands are injured because of fireworks? Or more specifically, not being smart enough, or in enough control of oneself to light these supposedly safe explosives off without causing bodily harm. Enough that they had to make this video featuring Dan Doofus.

It’s a big enough deal that on their 2015 update, the CPSC decided to release an infographic. Apparently no one was reading their stats, or at least heeding their warning. People respond much better to pictures anyway. Don’t get me wrong, I love blowing shit up just as much as the next guy, but what I don’t love is the hypocrisy this great country of ours demonstrates on a daily basis. We just finished celebrating our independence. Oregon just re-legalized marijuana. But I can’t go camping or hiking in a park without worrying about Ranger Rick busting my balls for smoking a little weed? Nature, freedom, America. All stuff stoners like. Hypocrisy that has the potential to ruin our lives? Not so much. Fireworks are more deadly than weed each and every year, and that will never change.